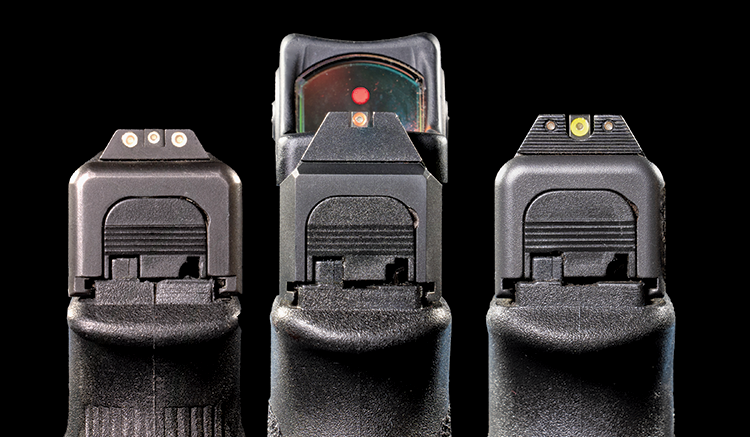 The ability to engage and hit targets in low light scenarios is critical to officer survival.

The importance of low light shooting skills isn’t diminished during daylight hours. During the day, there are many situations in which officers are faced with reduced or inconsistent light.

Ambient light isn’t the only factor. Your visual acuity will be further reduced by the fact that you and your assailant will frequently be in motion prior to, and during, a shooting. And, the effects of stress and fear also adversely affect your visual acuity. Hormones secreted during periods of high stress or acute fear dramatically decrease visual functioning.

Why You Need Night Sights

Although they have only become popular relatively recently, night sights have been available for over 60 years. Many handguns now come equipped with night sights or are available with them installed as a factory option.

Handgun night sights can be divided into two categories: illuminated iron sights and electro-optical sights. All of these sights are equally usable in daylight.

Laser aimers technically fall into the category of low light sighting devices, but they are outside the scope of this article.

Photoluminescent night sights need to be charged by exposure to light. They utilize what is sometimes referred to as “glow-in-the-dark paint.” The paint contains special pigments which allow it to absorb photons from multiple light sources, causing excitation which is observed as the release of light, i.e., a glow-in-the-dark effect.

The length of time they glow and their brightness depend on the pigments used and the previous light exposure type and duration. The latest generation technology offers up to ten times higher brightness than previous materials and may be seen for up to three to five hours after exposure to sunlight or artificial light (500 lux) for about ten minutes.

Radioluminecsent night sights require no charging. They’re self-powered and produce a consistent luminosity which does not fade during the night. Illumination is provided by special inserts consisting of small glass capsules filled with tritium, a radioactive isotope of hydrogen. The inner walls of the capsules are coated with a phosphor compound. As the tritium decays, beta rays are produced which strike the phosphor particles on the inside of the glass, causing them to emit visible light.

The color of the light emitted is determined by the type of phosphor used. Green, yellow and orange light emitting capsules are available. Green is the brightest color and the easiest for the human eye to see in low light, followed by yellow and then orange. Other colors could be provided, but would be too dim to be practical.

The use of two colors provides more distinction between the front and rear sights and helps avoid the possibility of momentary confusion as to which dot is which. Many shooters also find that two color night sights make it easier for them to concentrate on front sight in low light conditions, aiding accuracy.

Tritium has a half-life of 12.3 years. The brightness of the capsules will diminish as the tritium decays over time. The sights will have lost approximately 50% of their illumination at the half-life. From a practical standpoint, tritium night sights may remain serviceable for up to 15 years.

Combination tritium and photoluminescent night sights are designed so that the short-term glow of the paint would aid in transitional lighting situations, while the tritium inserts provide a long-term glow.

Tritium Fiber-Optic (TFO) night sights are also available. They’re true night sights, designed to give you the advantages of both tritium night sights and fiber optics. The fiber optic provides an easy to distinguish contrasting material.

Fiber optics emit no light and require an external light source. Fiber optics are by themselves high visibility day sights, although they could function as a quasi-night sight which aids in sight acquisition – depending on the lighting and if used in conjunction with a flashlight.

Electro-optical reflex sights for handguns are a comparatively recent innovation. Miniature reflex sights, often referred to as Mini Red Dot Sights (MRDS), are considered by many to be the future of handgun sights. Electro-optical sights with green dots are also now hitting the market. For purposes of this article, we will use MRDS generically for both red and green dot optics/sights.

Miniature open reflex sights first became popular in competitive shooting due to their advantages and have become increasingly popular for both duty and personal/home defense. The biggest downside has been their price tag; however, the cost of outfitting your pistol with an MRDS has come down substantially. Durability and battery life have also improved greatly to the point that they are no longer a factor for duty use. Most major handgun manufacturers now offer pistols which come with the slide already milled to accept an MRDS, making it easier and less costly to mount optics.

An MRDS provides you with a combination of speed and precision under virtually any lighting condition. The human eye can only focus on one distance at a time. Shooters with aging eyes or less than perfect vision will find an MRDS much easier to use than iron sights.

Murphy being what he is, most users back up their MRDS with tall iron night sights designed for use with suppressors. Suppressor sights provide an elevated sight picture which is able to co-witness with a slide mounted MRDS. Some MRDS are designed with an integral rear sight built into the body.

In order to accurately aim your weapon, you need to be able to clearly see the sights. This is often difficult or impossible to do with standard sights in low light situations. Tests which were conducted at the FBI Academy demonstrated an increase in night firing accuracy by as much as 500% when tritium night sights were used.

Internal testing done by Trijicon® has shown that most users are ten to 30% faster getting center mass hits on a target with the company’s HD™ Night Sights than with standard pistol sights. Their data shows this to be true, regardless of the user’s current proficiency level in pistol shooting and is due to the ability to obtain a faster focus on the front sight of the HD Night Sights.

According to statistics, most shootings take place at distances of 20 feet or less. Many of the shootings may be classified as spontaneous, where there is no warning and the weapon is in the holster at the outset. From a practical standpoint, there’s often little or no time to see the sights (even if the sights would be visible), nor any real opportunity to use them.

At these short ranges, a trained and practiced shooter shouldn’t have any trouble getting center of mass hits in low light, even with the ability to see or use the sights impaired. This is due to what’s commonly and erroneously referred to as “muscle memory.”

Every time a shooter draws and aims a handgun, the action becomes imprinted in the shooter. Eventually, typically after several thousand repetitions, the conscious execution of skills becomes subconscious and automatic. The weapon’s sights are instinctively aligned and little or no sight correction is needed.

Do night sights improve hit ratios on the street? The answers aren’t clear-cut. Most individuals involved in spontaneous shooting scenarios report either not using their sights or not remembering if they did.

When faced with a threat, the human mind instinctively focuses on the threat. Plus, the physiological effects of extreme stress can make it difficult, if not impossible, for the eyes to get a clear sight picture. Training can help to overcome this to some extent. The issues of threat focus and clear sight picture are not an issue with an MRDS. You simply put the dot in the sight window on the target.

This isn’t to say that iron night sights aren’t advantageous to have in close range, spontaneous shooting scenarios. Night sights allow you to use a flash sight picture in situations when this would otherwise be impossible due to low ambient lighting. According to proponents, the flash sight technique – also known as the front sight method – is easier to learn than point shooting and inherently more accurate. With practice, there is very little loss of speed by using this technique.

A research study conducted by the Los Angeles Police Department found that officers have difficulty distinguishing between lethal and nonlethal objects in levels of light less than that produced by 0.5 foot candles – routine working conditions at night.

Under these circumstances, you’ll need the illumination of a white light, irrespective of whether your weapon has night sights, standard sights or a laser aimer. The application of a powerful white light can also blind the opponent and impair his ability to shoot us at critical moments.

Having a weapon light doesn’t eliminate the need for a handheld flashlight. A flashlight is still essential for general illumination tasks and as a backup.

Night sights excel in nonspontaneous shooting scenarios when the target is clearly identifiable and standard sights could not be seen or wouldn’t be silhouetted against the target. Night sights are invaluable in these situations. Although they certainly aren’t without their limitations, night sights are a valuable tactical aid.

Eugene Nielsen owns and operates a private intelligence and security consulting firm. He has a BA degree in political science from the University of California at Santa Barbara.