The NRA Foundation is proud to announce the next phase of its Cars For Freedom initiative: NRA Cars For Freedom: Back Our Blue. The nationwide campaign asks supporters to stand with the NRA in support of America’s law enforcement, by donating cars, boats, tractors and other vehicles to the initiative. Donations are tax deductible and will be used to bolster the NRA Foundation’s Law Enforcement program, which provides training, supplies and other benefits to our nation’s law enforcement officers. Those interested in joining the NRA to “Back Our Blue” can visit NRACarsforFreedom.com or call 1-866-NRA-GIFT. The NRA Foundation will pick up donated vehicles for free at a time most convenient for those who donate. 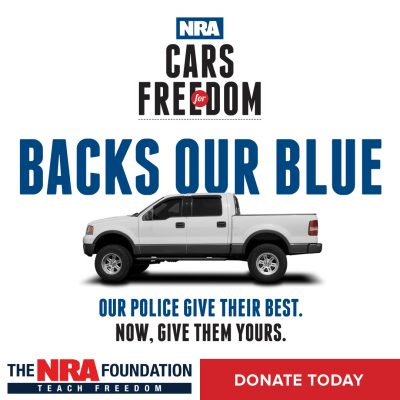 For decades, the NRA has been an unwavering supporter of American law enforcement, assisting retired law enforcement officers with the benefits of the Law Enforcement Officers Safety Act (LEOSA), providing self-defense insurance for retired and off-duty officers, defending America’s police when their courage unjustly comes under fire, and by means of the Line of Duty Death Benefit program, which provides public law enforcement officers with a $35,000 line of duty death benefit, if they are killed in the line of duty.

“Stand with us. Help us Back Our Blue,” says LaPierre.

Amie Krol was a beneficiary of that program. Last summer, five Dallas law enforcement officers were killed while protecting hundreds of protestors who marched against America’s police. Amie’s brother, Mike Krol, was one of them.

“My brother gave his life protecting those who marched against him. That’s why I Back Our Blue,” Krol says in a powerful radio spot and video that are playing nationwide in support of the campaign. Since 2000, the NRA has paid out about 3 million dollars in line of duty death benefits.

“While there are those in the media who paint our police as criminals, and celebrities attack them, the NRA backs our blue,” says Krol. “Now you can too.”