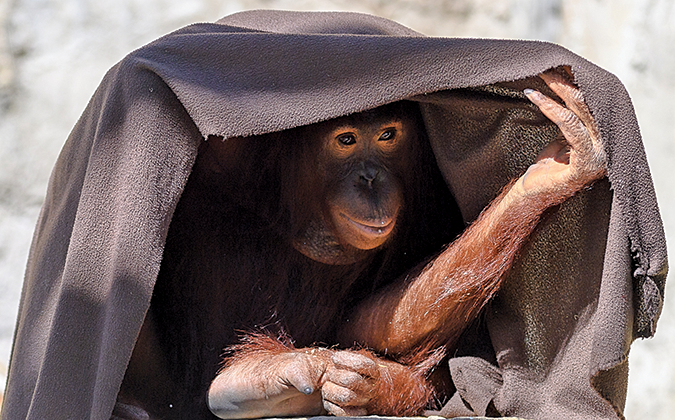 This sounds “hisssssterical”… A 54-year-old woman from Vero Beach, Florida, was arrested after crashing into multiple vehicles and throwing a fake rubber snake at deputies. Investigators say the chase began when the suspect intentionally hit one of the Martin County Sheriff’s Office vehicles as she tried to evade a traffic stop. She led deputies on a 100 mph chase, hitting another patrol car and a civilian truck, injuring the three people inside. When deputies approached the suspect, she threw a fake snake at them. While the woman was not injured, four people were transported to the hospital with nonlife-threatening injuries. (She ended up making an asp out of herself.)

Don’t worry. If you don’t have the right change, look around – bricks are free… A man in Detroit was arrested and charged with the illegal possession of guns. However, the federal agents who arrived at his home with a search warrant were more interested in how he made a living: Officials say he sold marijuana from a vending machine attached to his house, netting $2,000 a day (according to the accused). News sources reported that agents with the Bureau of Alcohol, Tobacco, Firearms, and Explosives had made purchases from the machine to collect evidence before the bust. (Change is inevitable – except from this vending machine.)

He doesn’t suffer from stupidity – he enjoys every minute of it… Like a scene from a Three Stooges movie, a man in Maine attempted to hide from police by sitting in a chair and hiding under a blanket. Belfast police had been dispatched on the report of an intoxicated man causing a disturbance at a local bar. When they arrived, they met up with the man and removed him from the property. They also told him he would be arrested if he came back. A few hours later, a sergeant with the department was checking the parking lot of the inn where he found someone sitting in a chair and hiding under a blanket. When the sergeant pulled the blanket off, he found the same man hiding under it. He was then taken into custody and charged with criminal trespass. (Is this guy a moron? “Soitenly,” nyuk nyuk nyuk!)

“Okay, show me your license and registra…say what?”… When a San Francisco police officer approached an idling car with its headlights off around 10:00 p.m., he observed that it was empty. That’s when the car suddenly moved forward, crossed the intersection and came to a stop with its emergency flashers on. As it turned out, the AV, or Autonomous Vehicle, was operated remotely by a company and it was just trying to move into a safe position before yielding to officers. “An officer contacted [company] personnel and no citation was issued,” the company explained in a statement. A maintenance team was dispatched to take control of the vehicle. (It would have been a little difficult issuing a citation to a driver who wasn’t there.)

I’ll have a grape slushie, bag of chips, dime bag of weed, and some magic mushrooms… A “convenience store” in a Lumberton, New Jersey, strip mall was reportedly selling more than Scratch-Offs and cigarettes. The Burlington County Prosecutor’s Office said “shoppers” surrendered their cell phones to an armed guard wearing body armor and were scanned by handheld metal detectors before being shown into a back room. Afterwards, they could browse for marijuana, edibles and psychedelic mushrooms with colorful packages mimicking popular food items such as “CHEETOS®, LIFE SAVERS®, NERDS and SKITTLES®,” as well as a Cocoa PEBBLES™ Krispy Bar which featured a picture on the package of Fred Flintstone with red eyes. The store’s owners were charged with possessing marijuana and psilocybin mushrooms, along with other offenses. (The worst part of the story…the besmirching of Fred Flintstone’s character.)

His whole life suddenly flashed before his eyes…face, nose, ears, and singed hairline… A resident in New Orleans who has had his truck targeted in the past for smash-and-grab type robberies left a little surprise for would-be thieves in the form of a rigged flashbang. He set up his center console so that it would trigger if someone tried to get into it. A video shows the thief hanging out through the broken window of the truck when, suddenly, a bright explosion is observed. Predictably, the thief made a hasty exit and got back into the getaway vehicle after experiencing a flashbang right to the face. The truck’s owner had his windows smashed on six other occasions over the previous eight weeks which is his reason for taking matters into his own hands. (Perhaps including a bright green dye pack may help with future investigations.)

Wouldn’t it be simpler to just get a job?… A 60-year-old German man allegedly had himself vaccinated against COVID-19 90 times in in order to sell forged vaccination cards with real vaccine batch numbers to people not wanting to get vaccinated themselves. The Magdeburg resident received the shots at vaccination centers for months until criminal police caught him. The suspect was not detained, but is under investigation for unauthorized issuance of vaccination cards and document forgery. Police confiscated several blank vaccination cards from him and initiated criminal proceedings. It was not immediately clear what kind of impact the shots had on the man’s personal health. (And I was worried about getting three.)