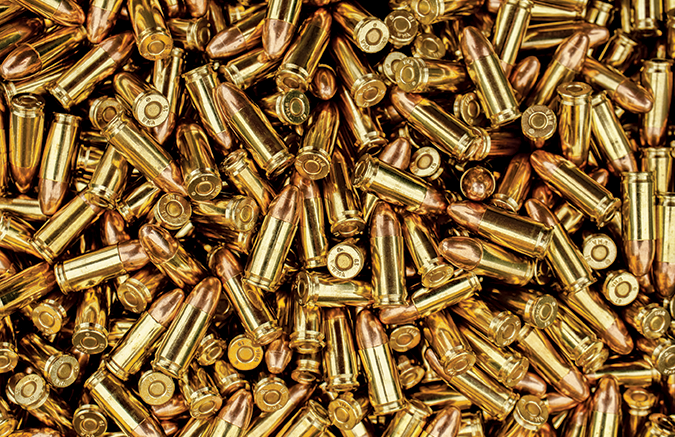 Since March of 2020, ammunition has been in short supply for shooters, police academies and law enforcement agencies. The situation has improved a little bit as of late, but don’t fool yourself into thinking the shortage has ended.

The demand for ammunition is still high – especially for training ammunition. Add in the cloud of gun and ammunition control legislation at the federal level and demand may continue unabated into the foreseeable future.

For most departments, the ammunition shortage has resulted in changes to firearms training. Nearly all departments have cut back the number of rounds fired during live fire training and have curtailed or eliminated their monthly training ammo allotments. Some agencies have slashed firearms training all together, instead opting to only run their department or state mandated qualification courses. However, many law enforcement agencies have adapted and their training programs have thrived because of creative instructors and training staff.

George Petronis is the President of Police Ammo from The Gun Shop in Southampton Township, NJ. They are a Vista Outdoor distributor for Delaware, Virginia and Maryland, selling ammunition from Federal, CCI, Speer, and Remington brands. He told me the ammunition supply is a “critical situation” and new orders are out 12-15 months from the day they are ordered to the day they are delivered with no relief in the foreseeable future. He stated each of the Vista Outdoor brands has been churning ammunition out as fast as they can, but the demand is outpacing their manufacturing capabilities.

Petronis told me that his business has been working hard to get ammunition to the law enforcement agencies they serve. He has tried to learn from past shortages to make sure their warehouse inventory is a year ahead, keeping customers supplied with training ammunition even if they can only fill partial orders.

Petronis believes the single greatest contributing factor to the low supply of ammunition is a surge in new firearm and ammunition buyers. He says an overwhelming number of first-time gun buyers are buying large amounts of ammunition to keep on hand rather than buying one or two boxes at a time. On top of this, he believes the labor issues resulting from COVID-19 and a shortage of raw materials, like copper, contribute to the manufacturers struggling to keep up with demand.

Deputy Chief Art LeCours from the Ashland (OR) Police Department told me he has been able to keep a continuous supply of ammo on hand due in part to prior planning. Instead of ordering a one year supply of training ammunition, he has attempted to keep a two year supply of ammunition on hand to guard against ammunition shortages. I know this can be a difficult process due to budget and purchasing rules, but when I was a sergeant with the Bend (OR) Police Department (before retiring), I was able to navigate my department’s red tape and do something similar to Deputy Chief LeCours. It can be done and it’s a battle worth fighting.

The situation isn’t quite so rosy for some other departments. An instructor from a Midwest municipal agency told me training ammunition has been extremely difficult to get. This instructor told me suppliers who value working with police departments are unable to reliably procure ammo through their normal supply chains. This instructor said, “The suppliers have also experienced price increases and can no longer sell to police departments at previously contracted rates without taking huge losses. The ammo companies do not seem to be working with suppliers to keep costs down for police.”

Officers who are responsible for purchasing or supplying their own training ammunition have reported seeing an increase in supplies at their dealers, but have also reported an increase in cost. As one officer told me, “The availability seems to be getting better for commercial purchases, but availability for large orders at bulk prices has not caught up.” Having entered the realm of the newly retired, I can attest that ammunition is more easily found on store shelves.

Lieutenant Gabe Sapp from the Corvallis (OR) Police Department heads their training division and he told me that their firearm instructors have had to be creative when developing and executing training. They have utilized the shortage as an opportunity to “slow things down,” go back to the basics and focus on the fundamentals. He told me their instructor staff has embraced the challenge by being flexible; by offering different training options compared to the past; and by doing more reality-based training which includes more less-lethal options, medical aid and threat assessment. He told me that this has resulted in about the same amount of training, but it’s much different than the training the department has done in the past. Lt. Sapp said, “Overall, it has forced our heads to think outside the box and allowed us to provide training which we have never done in the past.”

Sergeant Alexandra Nelson, the Tactical Operations Group Supervisor from the Arlington Heights (IL) Police Department and an International Association of Law Enforcement Firearm Instructors (IALEFI) board member, told me that the training ammunition shortage hasn’t affected their department training so far. She told me that they have a simulator in their department and have used it to effectively supplement live fire training. She said that, as far as actual firearms training is concerned, they have focused on supplemental firearms skills which don’t necessitate as much live fire training ammunition, such as working on magazine changes, drawing more efficiently from the holster and the use of handheld flashlights.

Deputy Chief LeCours went even further and changed how his department schedules their in-service format. Instead of scheduling the more traditional six to eight hour training blocks, they have embraced the adult learning concept of high frequency, short duration training. Now, they train monthly in one hour increments of on-duty training. A side benefit to this change in scheduling has been that live fire training can be more “round count” specific. Their training has also become more of a one-on-one training which better addresses the training needs of individual officers. Deputy Chief LeCours added, “This has increased our firearms training from four to six hours a year to eight to ten hours with better quality training.”

Even though departments like the ones mentioned have found successful ways to train, what is a department to do when they have exhausted their ammunition supplies and are stuck waiting for their order to be delivered? When it comes to managing recoil, there really is no substitute for live fire firearms training. However, there are some pretty amazing alternatives which allow officers to work on the fundamentals of marksmanship, drawing from the holster, target transitions, and other weapon handling skills.

Simulator training is another short-term alternative to live fire training. This type of training should never replace live fire training, but in these days of ammo scarcity, instructors can maximize the benefits of simulator training to work on firearm skills. In addition to decision-making training, simulators can be set up to mimic recoil allowing officers to work on managing recoil, recovering their sights back to the target, transitioning between targets, and many other important skills.

As good as today’s simulators and reality-based training equipment is, it remains limiting when it comes to working on the fundamentals of marksmanship. However, Umarex USA produces some fantastic CO2 BB gun options which mimic our duty handguns. These are not to be used during force-on-force training. These options fire BBs at 400 fps and can cause fairly serious injuries. The tradeoff is that they offer some surprising accuracy results out to 30 to 35 feet. These have the same look and feel – and nearly the same weight – as a duty handgun. As a result, they fit into the same duty holsters officers use every day. These air pistols have blowback action; full-size drop-free magazines; slides stay locked open on the last round fired; 15 to 18 round BB capacity depending on the model; trigger safeties; interchangeable grip backstraps; and ambidextrous slide releases. These are a great alternative to live fire training when ammunition is scarce, allowing officers to work on their fundamentals while managing recoil due to their blowback action. And, for about .01¢ per shot, this is a very affordable alternative which can pay for itself in short order.

While it’s true the ammunition shortage has affected law enforcement training, it’s also true that this provides departments, instructors and officers with an opportunity to evaluate what we do and reimagine how it can be done better in the future. We can make scheduling more efficient, utilize our available training resources more effectively and assess new training alternatives for future use.

Sgt. Todd Fletcher (ret.) has over 25 years of law enforcement experience, with assignments to patrol, criminal investigations and training. He has presented instructor development training nationwide and at multiple regional, national and international training conferences. He owns Combative Firearms Training, LLC which provides firearms training and instructor development classes to law enforcement, military, private security, and armed citizens. He can be contacted at todd@combativefirearms.com.