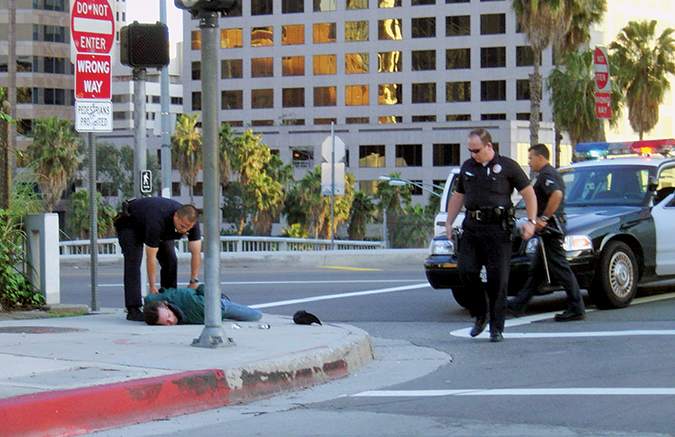 Your partner, Officer Don, arrested and fought a resisting male, wrestled him to the ground, applied metallic handcuffs, and then rolled the facedown person onto his side. A few moments later, the male barely muttered, “I’m having difficulty breathing,” and then suddenly, without making sounds or movements, became nonresponsive and died.

You and others question how this could have happened. After all, he had remembered to use the Recovery Position to improve breathing following restraint to prevent such deaths and performed it exactly as it was taught to him and to you in the police academy and during in-service training. The Recovery Position, also known as the lateral decubitus position or the lateral recumbent position, is generally taught during basic first aid training. Its purpose is to minimize an individual’s aspiration on vomit or other material which may obstruct the airway.

The decedent’s family filed a civil action alleging Officer Don caused the death of their loved one. During his deposition and again at trial, plaintiff’s counsel firmly asked, “You wrote in your report that you placed the decedent in the Recovery Position, but he didn’t recover…isn’t that, right?” “Yes,” answered Officer Don. The attorney then alleged, “You were trying to misrepresent to your supervisors and to the community that you used a so-called Recovery Position which you knew would not aid in my client’s recovery. Isn’t that, correct?” “No,” he responded, “I was taught to use the Recovery Position because it improved a person’s ability to breathe. I do not know why it did not work.”

The attorney, who is now getting louder and more aggressive, declared to the jury while glaring at Officer Don, “This officer is deliberately misleading this court and all of you about the efficacy of the Recovery Position! Medical studies have shown that it does not improve breathing and was never designed to improve breathing, unlike his testimony under oath.” Then, he asked to show several studies, treatises and articles to the jury and, after the court granted his request, the publications confirmed the intended purpose of the Recovery Position, confirming that both his training and his beliefs were wrong.

During closing argument, the attorney reminded the jurors of the medical examiner’s testimony: The male had congestive heart failure and the repositioning onto his side was a contributing factor to his death. After arguing that Officer Don’s repositioning the male into the Recovery Position had contributed to his death, the jury returned a large monetary verdict against him and the municipality.

Stunned and shocked by the verdict, Officer Don told everyone who would listen, “I did what I was taught to do because they said it would improve breathing and help prevent an in-custody death.” He and other officers began to question their training and whether the Recovery Position improved breathing. Officer Don told officers that, after searching the Internet, he had found publications which explained why placing a person into the Recovery Position to improve breathing is a myth.

Many Law Enforcement Officers (LEOs) are taught to reposition a restrained subject onto their side – preferably the left side – to enhance breathing, but there is little scientific evidence that such repositioning will improve respiration (gas exchange) and/or ventilation (inhaling and exhaling). This recommendation follows basic first aid training for unconscious individuals who are breathing normally whom officers may encounter. When a person becomes unconscious prior, during or after a confrontation with LEOs, officers are taught to do a rapid visual assessment of the person using the ABCs: Airway, Breathing and Circulation, and then are trained how to reposition the person into the Recovery Position for breathing improvement. The theory behind the Recovery Position is that, if the unconscious person has an open airway and is breathing, the person should be rolled onto the side (Recovery Position) for two reasons: to protect the person’s airway and to minimize and/or prevent aspiration of gastric contents. In some cases, however, the Recovery Position may cause medical issues.

Aspiration focuses on food from the stomach or saliva entering the subglottis, thereby obstructing a person’s airway which can cause them to die. Of course, dirt, sand or other materials may also enter the mouth causing the person to aspirate. If stomach contents find their way into the lungs, this can create an infection in the lungs commonly referred to as aspiration pneumonia. The limited medical literature on minimizing aspiration is clear that there is no ideal position for every person to be placed into to prevent aspiration.

One 2011 scientific article identified and discussed three categories of aspiration: before swallowing, during swallowing and after swallowing. The Recovery Position focuses on repositioning an unconscious person who is breathing normally so the stomach contents will more easily drain from the throat and mouth. Of course, if the person is vomiting; bleeding heavily around the mouth; or has foreign debris such as dirt, sand, mud, etc., the Recovery Position may help to drain these fluids from the throat and the mouth and make the suction and/or debris removal easier if the officer is qualified to perform debris removal techniques.

Officers must be taught to mentally reframe how they view the suspect or the inmate who suddenly becomes unconscious while under the officer’s care, custody and control. The reframing: View the individual as a patient because he (or she) is suffering a medical emergency. It is critical to request that Emergency Medical Services (EMS) urgently respond to the officer’s location and then transfer the prehospital care of the individual to trained and certified EMS providers.

While awaiting EMS, DO NOT permit an individual to lie on his (or her) back (supine) because, according to a 1992 study, there is an increase in aspiration risk factors the longer a person is kept in the supine position. Depending upon the situation and the individual’s injuries, if any, officers may decide to roll a person onto his (or her) side for the primary purpose of minimizing aspiration, not improving breathing. If the person stops breathing, Cardiopulmonary Resuscitation (CPR) must begin immediately to help save the person’s life.

Most LEOs are neither trained nor qualified to make a medical and/or a psychological diagnosis. Yet, many administrators, supervisors and/or trainers encourage LEOs to do something after a suspect or inmate collapses in front of them, becomes nonresponsive following a struggle, and so forth. No LEO wants to experience an arrest related death or an in-custody death of a person with whom (s)he was dealing. Based upon his (or her) training and/or policy and not knowing what else to do, the LEO may place an unconscious individual into the Recovery Position, hoping it will help the individual and show the administration and the community that something was done in an effort to save the person’s life, preventing an in-custody death.

Practically, the Recovery Position may worsen a person’s preexisting medical condition. For example, a 2005 medical study compared 14 chronic heart failure patients to 13 healthy volunteers and found the Recovery Position caused greater discomfort and worsened lung function in those patients who had chronic heart failure. In fact, the group of patients who had congestive heart failure reported shortness of breath and more discomfort that the other group. Another study determined that those patients with larger hearts were affected more when placed into the Recovery Position. During autopsy, medical examiners often find a person who died during a struggle with LEOs had an enlarged heart which contributed to the person’s death. Of course, LEOs, and often the individual with an enlarged heart, do not know such a condition is present.

The study found that the Recovery Position delayed breathing assessment and delayed participants from identifying when breathing had stopped. The Recovery Position not only showed it was more difficult to assess these variables when compared to the head tilt and chin lift group, but also showed from a practical perspective that CPR was delayed.

The post-George Floyd culture demands many changes to the criminal justice system including accountability and transparency from municipalities, law enforcement administrators, police officers, and correctional officers. These demands are here to stay and will require law enforcement administrators, supervisors, trainers, and officers to scrutinize and then change policies, lesson plans, training, supervision, and reports which contain inaccurate and/or misleading information. After consultation with municipal legal counsel and medical professionals, if current agency policy or training directs officers to place any restrained person who is facedown after a struggle onto his (or her) side “to improve breathing,” the policy, lesson plan and training will need to be revised.

While these changes are being made, a short microlearning lesson can be easily and timely produced about the Recovery Position; all officers should be required to view it. The lesson must explain why the change(s) are being made, while simultaneously emphasizing the need to stop using the word “recovery” even though the repositioning will continue to be authorized depending upon the circumstances. Everyone in the agency must be told that the Recovery Position is not designed to improve breathing and may, in fact, cause medical issues. This must translate into removing the term Recovery Position, from training, from report writing and from testifying because there is no guarantee that the individual will recover. Replace the term by simply substituting, “Roll the person onto his or her side.”

Officers need to be reminded that a medical emergency takes precedence over criminal prosecution. Instilling and reinforcing this paradigm shift [reframing] into the minds of officers takes place through progressive leadership, scientific-based policy and training and initiative taking supervision.

Improvement of breathing by repositioning an individual into the Recovery Position is one of many myths which continue to plague and be perpetuated in law enforcement, but, in today’s environment, scienceis one primary foundation upon which to build policy and training programs. In short, replacing myths with scientific and evidence-based findings will not only save lives, but also careers.

John G. Peters, Jr., Ph.D. serves as president and chief learning officer for the Institute for the Prevention of In-custody Deaths, Inc. (ipicd.com). He also serves as Executive Director of the Americans for Effective Law Enforcement, Inc. (aele.org). A judicially qualified expert witness, Dr. Peters has testified in federal, state and international courts and has appeared on international and national news shows talking about force and policy issues. He is a regular contributor to Police and Security News.