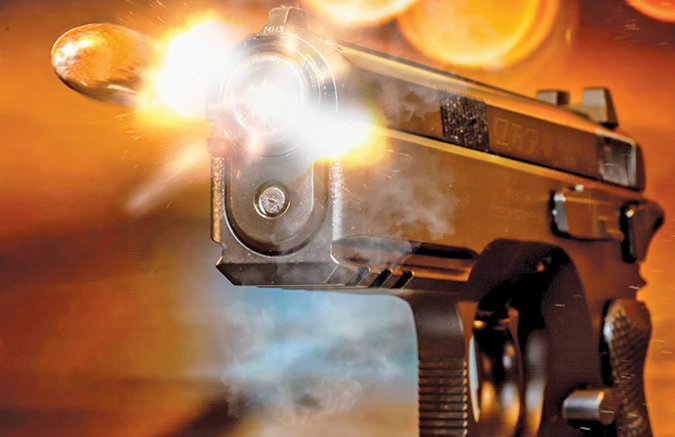 A harsh reality of gun fighting is the fact that you may be hit by an incoming round. A hit doesn’t necessarily mean stop, nor does down mean out.

Approximately 88% of people struck with handgun rounds survive, but to tip the odds back in your favor, you can’t give up and you have to immediately take the fight back to your assailant.

Learning how to fight after sustaining a hit should be a part of every officer’s training regimen. One needs to be proficient in basic operational skills, as well as shooting with one hand and from nontypical positions. This is an area I review with our officers on a regular basis and the good news is that a great deal of it can be accomplished off the range.

Other critical operational skills such as reloading or clearing simple stoppages should also be practiced. I strongly recommend the use of inert, dummy rounds when performing these tasks solo hand because the muzzle may cover body parts or point in an unsafe direction. For example, a kneeling officer might stabilize the pistol behind the knee when reloading support hand only. If an officer is familiar with basic operational skills, performing them strong or support hand only will be second nature.

Live fire could include strong and support hand only firing, and shooting from the ground. Grounded positions could include shooting while laying on either side, on the belly and on the back with the feet facing the target or up range. Because this may be new territory for many officers, initial practice should be with an empty gun. Most officers will find themselves well outside their comfort zone doing this and it is especially important to keep the muzzle under control and not cover your own body parts. Live fire should be done at a pace where safety is not compromised and be done one shooter at a time under the watchful eye of an instructor or training partner.

Another ironic twist is that the vast majority of police firearms training takes place during the day while most police shootings take place under less than optimum conditions. This trend has been apparent for over 150 years and I wouldn’t expect anything to change for the better soon. In most cases, if you want to develop your low light gun fighting skills, you are on your own!

Many agencies do in fact require officers to qualify in low light, but that doesn’t equate to training. Shooting a predictable drill while wearing a set of welding goggles to simulate poor light will hardly prepare an officer for the real world. So, how should one prepare for the very real possibility of a low light shooting incident? Those same drills we practice during bright light conditions will serve us equally well in the dark. The only difference is that we will be adding an artificial light source.

One takeaway I gained from a program I attended at the SureFire Institute some years ago was that “light helps us make an informed decision.” Indeed it does! As a law enforcement officer, you are not going to get a pass on a bad shooting simply because it’s dark. However, if you hesitate at the moment of truth, you might be killed or seriously injured. Clearly, there is a need to get it right and a light source helps us do that.

A light can be either handheld or weapon mounted. Weapon mounted lights have come on strong, but they do not replace a handheld flashlight for most tasks. The overwhelming handheld choice for cops in the 21st century is a small, tactical light with a high lumen output. Numerous flashlight assisted shooting techniques have been developed over the years and can be categorized as hands together or hands apart. Personally, I think the hands apart techniques are more useful for patrol cops and investigators as most events evolve very quickly in relatively close quarters. Off-range practice (empty gun – check it twice) could consist of quickly going from a search to fire mode to simulate bringing the gun to bear on a spontaneous threat.

If you have the opportunity to do some low light practice, focus on one or more threats at relatively close range. Once you get comfortable with that, work in some pivots, a little movement and use of cover. Chance continues to favor the prepared individual.

An element common in many police action shootings is movement. Not only is the officer moving, but the bad guy is on the move as well. Movement remains a fundamental tactic, but is situationally dependent. Should an assailant be only double arm’s length away, there simply may not be enough time to move and an immediate shooting response is in order. But, if danger is several yards away, movement is your friend. Moving targets are harder to hit!

In training, I make a distinction between moving and shooting and shooting while moving. The well-prepared officer should be competent in both areas. Many instructors make it a point to have their students “get off the X” either while drawing or immediately after that first volley of shots break. Even a little bit of lateral movement can cause an assailant to delay his shot or miss and buy you a precious second to respond with decisive fire. Either way, that movement should be as fast as possible with a hard break to the left or right.

With just a bit of practice, officers of average ability will be able to put combat effective hits on a target while moving. The key to success is keeping the knees slightly bent while moving and watching the sights. Again, targets should be placed at relatively short range and initial movement should be slow. If this is totally new territory, work this first with an empty gun and only go ballistic once you are comfortable with the movement. Better yet, train with a partner who can provide a shoot stimulus where you fire a burst of two to four shots while moving. Movement can be forward or on an oblique angle.

In addition to their service pistol, most law enforcement officers also have shoulder weapons available to them. The previous discussions contained herein did focus on the handgun, but many of these same concepts can also be applied to shotguns and rifles.

In many areas, training time on shoulder weapons is but a small fraction of that devoted to pistols. Unless you are on a special team, training can be best described as cursory. Again, some outfits do go the extra mile in getting the troops squared away, but they remain the exception, not the rule. My agency frequently hosts training for outside agencies and it’s not unusual to have officers come out who are absolutely clueless as to how to run their shotgun or rifle. I wish I was making this up, but, sadly, that’s not the case.

So, team, get cozy with that rifle and/or shotgun. Know how it works. Know how to load it, maintain it and make it safe. If an opportunity comes up to get in some extra trigger time, by all means go for it!  When things get ugly, that rifle or shotgun represents a huge advantage over a pistol.

I’m sure there are a few other areas we could explore to further refine our skills. Hopefully, the ones identified in this three part series will be a good start in ensuring your safety. Train as if your life depends on it. It really does!