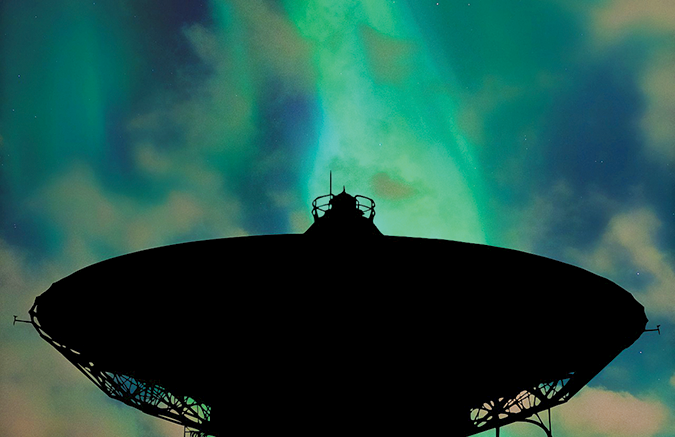 He also uses that array to stay in touch with the mother ship… A California Highway Patrol officer pulled over a vehicle which had a 19 inch satellite dish bolted to the car’s hood. The dish appeared to be an antenna from the Starlink Satellite Internet Service. The officer said to the driver, “Sir, I stopped you today for that visual obstruction on your hood. Does it not block your view while driving?” The driver reportedly replied, “Only when I make right turns.” A representative of the law enforcement agency told reporters that the motorist, driving a Toyota Prius, received a ticket for a moving violation. The driver explained that he uses the antenna to get Wi-Fi service for a business which he operates out of the car. (Go left, young man, go left!)

She’s fulfilling her destiny… A 34-year-old woman in St. Petersburg, Florida, whose last name is “Booze,” crashed into a Taco Bell® sign as the result of driving drunk. The woman reportedly first crashed into a tree, then the Taco Bell sign, before fleeing the scene. Police spotted her and stopped her for speeding soon afterwards. Police reportedly observed that Booze had “bloodshot, watery eyes; a dazed and blank expression on her face; and an odor of an alcoholic beverage on her breath” as she was being questioned. It turned out that the Taco Bell where Booze caused the damage was actually her place of employment. (The irony continues as they discover her first name is Chalupa.)

Class, our words for today are “oblivious” and “hypocrisy”… A New York City councilwoman virtually attended a finance committee meeting, commenting on school classroom sizes and education funding, as she shifted her focus back and forth between the camera and…the road. A local newspaper reported that the two-term Democrat was driving her car during the meeting. During her time as a council member, she has advocated for improving bike lanes and expanding speed camera use. However, since 2013, the license plate registered to her car has received 62 traffic violations. The rap sheet includes three tickets for speeding in school zones in 2020, all in Manhattan. (What she lacks in intelligence, she more than makes up for in stupidity.)

Antonio, meet Kharma. Kharma, meet Antonio… An Atlanta city councilman – who aspires to be the city’s next mayor – had his car stolen by kids in broad daylight. The councilman was attending a ribbon cutting ceremony at an event in Northeast Atlanta when at least four kids jumped into his car and took off. The councilman is reportedly running on a mayoral campaign of “reimagining public safety.” Last year, he voted in support of an ordinance to withhold $73 million from the budget of the Atlanta Police Department. The ordinance was narrowly voted down. He doesn’t plan on filing charges against the kids who, he says, “acted out of desperation.” Incidentally, he is under indictment on federal fraud charges related to alleged incidents which occurred in the years prior to him winning the council seat in 2019. (Where is a social worker when you need one?)

The number one rule of committing a crime: Don’t dox yourself… A drug dealer in Liverpool, England, is a big fan of cheese, especially Stilton. He recently found a variety of blue Stilton which was so unbelievably tasty that he just had to share his find with some friends. The man took a picture of the cheese and posted it on EncroChat which is supposed to be an encrypted phone system. The man wasn’t aware that the police had hacked into the system and had subsequently identified 10,000 of its users in the UK, most of them involved in criminal activity. The manner in which police busted this guy was a little unusual. Police used the man’s photo of the Stilton to bust him. In the photo, he was holding the cheese in his hand and, surprisingly, his fingerprints were clearly visible. The police identified him from that picture and he’s now serving time in jail, having been sentenced to 13 years for selling heroin and cocaine. (The police taking his mug shot: “Say cheese!”)

It’s always nice to see a civilized culture promoting the arts… Kentucky recently got a lot of attention for a five day party billed as a “Redneck Rave,” with dozens of people being arrested or cited. A park in Edmonson County hosted the event which organizers boasted would feature “mud, music and mayhem.” The sheriff told a local TV station that 14 people were arrested and another 34 were cited on criminal charges which ranged from assault and strangulation to drug and alcohol possession. There were also a number of accidental injuries, including one when a person was impaled by a log which pierced the floorboard of his vehicle. The organizer’s post on social media said they plan to improve the event and ensure the one scheduled for the autumn is even better. (“Hold my beer.”)

Everyone knows those little guys prefer Cracker Jack® and Corn Nuts… Staff at the El Paso Zoo in Texas will be pressing charges against a woman who reportedly jumped into a spider monkey exhibit and fed CHEETOS® FLAMIN’ HOT® to the animals. Zookeepers found out about the stunt through Instagram after someone posted video of the woman with the monkeys just feet away. The zoo director said, “This young lady decided to hop a fence, climb through some bushes, drop down into a four foot deep moat, walk across the moat, and then try to feed the spider monkeys. It was stupid. She’s very fortunate that it didn’t have a worse outcome for her or the animals.” After the woman was recognized by her employer, the Lovett Law Firm, she was promptly terminated from her job with the firm. (She now works for the Saul Goodman Law Firm.)