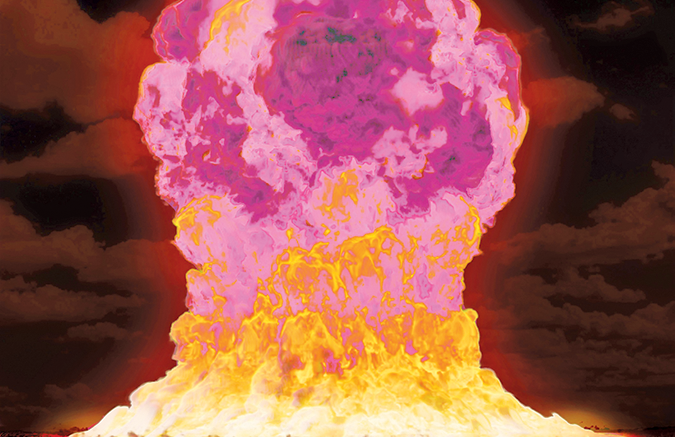 What happened to cakes with a secret color inside?… A New Hampshire man has turned himself in to police after detonating 80 pounds of explosives as part of a gender reveal party held in a quarry. The explosion reportedly set off earthquakes in the area and the blast could be heard from across the state line. Police in Kingston (near the Massachusetts border) received reports of a loud explosion and responded to a quarry where they found people who acknowledged holding a gender reveal party with explosives. The family thought the quarry would be the safest spot to detonate the explosive (Tannerite®) which is typically sold over the counter as a target for firearms practice. Nearby residents said the blast rocked their homes and some reported property damage. The individual who bought and set off the explosives has turned himself in to police. (Why is it that gender reveal parties seem to involve explosives, but baby showers don’t? Is it because men are involved?)

Hey, that’s nacho truck!… An Oklahoma City man thought it would be a good idea to steal a Doritos® truck which was sitting unattended at a local gas station. Since the truck was wrapped in one gigantic advertisement, it didn’t take police long to spot it. Police chased him through three counties – 90 minutes in all – before shooting the tires out and arresting him. A police captain was incredulous. “I would love to know the motivation of stealing a truck that’s very, very easy to spot and doesn’t go very fast.” He added, “What do you think you’re going to do with a truck like that?” (I guess legalizing marijuana really does lead to more crime.)

Since Sears® closed, it’s impossible to find a DieHard®… Two criminals in Clackamas County, Oregon, planned to tag team a crime. One would go into Kohl’s and shoplift numerous items, while the other would be waiting in the getaway car just outside the store. It sounded like a winning strategy, but, after the loot was gathered, the getaway car suddenly shut down and its weak battery died. Police were notified and, when officers arrived, they found our hapless thieves with the hood of the car up trying to get a jump from bystanders. Inside the car, they found phones, laptops, clothing, stolen credit cards and a credit card reader, drugs, and counterfeit cash. They also discovered that the getaway car itself was also stolen. The halfwits were charged with theft, possession of a forged instrument and a warrant for heroin possession. (Unlike the battery, the perps are being charged.)

There comes a time when a person needs to sit in jail for a while… A 29-year-old man from Marlboro, New York, scored a hat trick when he was reportedly arrested three times on the same day. After being first stopped that morning in the city of Newburgh, driving a Jeep® Cherokee, he was found by the trooper to have a suspended license and crack cocaine with him. He was charged with a misdemeanor and released. At 2:30 p.m. that afternoon, the same trooper stopped him again, this time in a Honda Civic and, again, found him in possession of crack cocaine along with heroin. His final arrest came at 5:45 p.m. when he was stopped driving the Cherokee again and detained after the trooper reportedly determined that he appeared to be under the influence of drugs. He was released with tickets on all three violations and ordered to appear in court the following month. (“No prison can hold me!” “You’re free to leave, sir. We’ve told you this twice already.”)

He’s an awful person, but I envy his time management skills… A 39-year-old Japanese man was arrested after “dating more than 35 women at once to get birthday gifts.” He reportedly met his victims while working as a salesman, ending up with birthday presents worth hundreds of dollars. He allegedly gave different dates for his birthday to each of his potential partners after claiming he wanted to have a serious relationship. He is said to have received cards and presents totaling 100,000 yen ($915), including an expensive suit. The women eventually realized his scam and formed an association of victims before going to police. He has since been arrested on suspicion of fraud. (Anyone who dates 35 women at one time probably won’t live long enough to see his next birthday.)

Wow, Czech this out!… A man in the Hradec Králové region of the Czech Republic shocked police officers when he turned in a Soviet T-34 tank and an SD-100 artillery platform as part of a nationwide weapons amnesty program designed to legalize guns which had not been registered. A local news television program reported that the man was a collector of historic weaponry and has owned the 1950s era tank since the 1990s. Authorities checked the tank and its gun to confirm that they have been properly deactivated and the man was allowed to keep them in his collection. (It’s a tankless job, but someone has to do it.)

Plus, a misdemeanor for not rewinding… A former Oklahoma resident recently learned she spent years as a wanted felon after she was charged for not returning a VHS tape of “Sabrina the Teenage Witch” to a Norman, Oklahoma, store 21 years ago. Online documents reveal she was charged with felony embezzlement of rented property in March 2000, but didn’t know about the charges until she recently tried to change her name on her license after getting married. She said that, over the last 20 years, she’s been let go from several jobs without being given a reason why and, now, it all makes sense. “This is why. It’s because when they ran my criminal background check, all they’re seeing is those two words: felony embezzlement.” The district attorney’s office said it decided to dismiss the case against her. She will now have to have the case expunged in order to clear her record. (The felony should be renting “Sabrina the Teenage Witch” in the first place.)