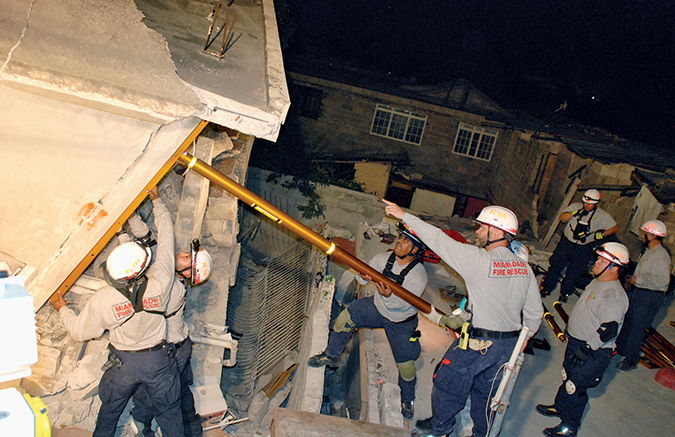 This column is dedicated to the victims and families of the Surfside, Florida, condo collapse.

Is it weird what I’m feeling?

Here I am in Boston with my wife on vacation, enjoying time with my son, his wife and my 18-month-old grandson, and I suddenly have an urge to be in Surfside, picking through rubble and recovering victims of this disastrous building collapse. They say that police work “gets in your blood” and never goes away. And, it’s true. But, there is a remnant of being a public servant for nearly three decades and it lingers. This is something which shadows one forever and it’s more than the memory of the satisfaction of catching bad guys. It goes beyond the fulfillment of working on a case and solving it; of hearing the jury say, “Guilty”; and of seeing a killer being led away to prison in handcuffs and shackles. There’s this visceral, undefinable desire to be near the “action” or, more specifically, to be part of something bigger than yourself. Indeed, what stays in our blood – and in our hearts – is the need to assist when an emergency happens. It’s the energy we get when we can be the helpers – the ones who can function, stay calm (on the outside, anyway) and do the tough stuff when others are broken, lost and wracked with grief. We thrive when we are the helpers, the solvers.

If you’re thinking, “Aww, that won’t be me. Once I retire, I’ll forget all about this stuff.” Well, maybe you will and if you can really walk away from it all and not feel anything, maybe we got into this line of work for dissimilar reasons. But, the reality for me is different. You can call it ego or whatever you want, but there I sat this past Thursday, June 24th, in my son’s living room in Boston, looking at the shock and horror on the faces of Surfside residents as they stood outside the rubble of the Champlain condo tower thinking, “I would have been there.” Someone in the homicide office would have called a meeting in the conference room, explained what was happening, and we would have formed teams and headed to Surfside. I would have been there with teams of rescuers, homicide cops, firefighters, and volunteers, trying to save people and, if we couldn’t, we would be retrieving deceased persons who belong to families standing on the other side of the yellow tape, waiting in terror.

I’m 63 years old. I’m in good shape, but I probably would have done something to my back or to my knees while clambering around the scene of the collapse. I probably would have needed my nebulizer a couple of times, inhaling all the dust and debris kicked up around the recovery scene. I probably would have gotten a dozen flashbacks of doing next of kin notifications as I watched the bystanders covering their mouths as the yellow blanketed forms are carted out of the wreckage. But, I can’t lie: If called, I would have gone in a heartbeat. Had I been back in South Florida at the time instead of in Massachusetts, I might have even volunteered, over the protests of my wife, who would have been saying something like, “What?? You’re going where? You retired 15 years ago!”

I know I am not the only retired cop who feels this way. Especially for my brothers and sisters with whom I worked homicide cases, I am sure there are many, if not all, who would have gladly joined me, making appointments with their chiropractors in advance. It’s that sort of mystical aspect of police work which motivates people to put on a badge and be willing to go into dangerous situations and risk life, limb and emotional wellness for the benefit of others – for less pay than dozens of other, safer jobs.

Just last month, on May 11th, many of us remembered the 25th anniversary of the crash of ValuJet flight 592 which nose-dived into the Everglades and obliterated all 111 flight crew and passengers on board. I spent three weeks out in the swamp with my team, picking up pieces of human beings, luggage and plane parts. There was no reward except for the solemn understanding that we had a duty to somehow try to honor the remains those bereaved families wanted to lay to rest. We got out there and surveyed a horrific, surreal landscape of tattered suitcases, clothes, metal, hands and feet, and we saw more than just “victims” – we saw our own wives and husbands, parents, kids…we saw ourselves. The reward was when a busload of them came out close to the crash site and applauded and saluted us for the work we were doing.

The core of what we do in law enforcement is more than just ridding society of its ills. We will never be able to permanently achieve such a thing. There will always be criminals and, hence, there will always be victims. The core of what we do – the beating heart of what it means to be a public servant – is the recognition that we are all vulnerable; we are all fallible; and we are all occupants of a fragile shell of flesh and blood – and that we, in the blink of an eye, could be the ones suffering from loss or be the loss ourselves. So, we are the hand which is grabbed by the desperate, grieving person looking for help and strength. We are the ones who keep holding their hand, guiding them through the impossible labyrinth of funerals, trials and (hopefully) closure. We are the ones who stand on the other side of the yellow tape, toiling, as they watch and look to us for some type of heroism or for some glimmer of hope. And, when the tape comes down, we are on the same side of life and death.

My grandson is running around happily at the news that we are all heading out to the park in a few minutes. I wonder where he will be in 20 years. A part of me hopes that he has a chance to serve others in some way; that he has the chance to be that hand which others can grasp. I hope he feels the fullness of heart which comes from pulling others up out of the quagmire of hopelessness and fear.

If you’re reading this, you might not even know why you chose the profession you did. But, I have a feeling it had something to do with being on that very special “other” side of the yellow tape. Thank you for making that choice. My grandson might be right there alongside you some day.

Ramesh Nyberg retired from law enforcement in November 2006 after 27 years in police work. He is the Director of Security & Auxiliary Programs for Ransom Everglades School in Miami. He enjoys getting feedback from readers and can be reached at ramesh.nyberg@gmail.com. Also, Ram has recently announced his newly published book, The Ten Must-Haves to Be a Great Detective, available on Amazon in both paperback and Kindle eBook. You can find it by visiting https://tinyurl.com/hwc2xajm