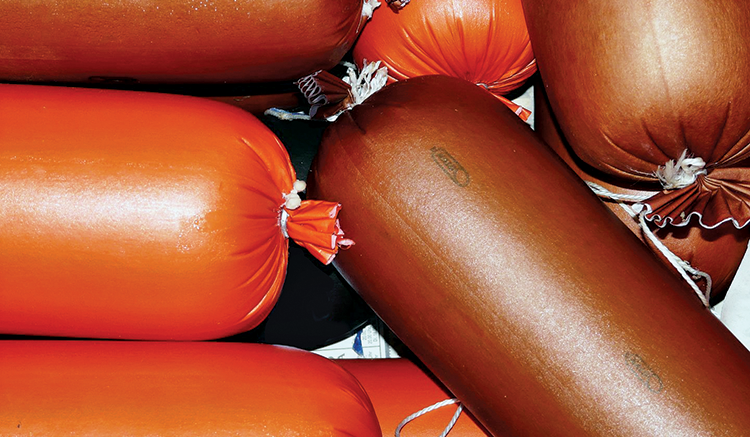 The “wurst” story of the day… US Border agents caught a vehicle carrying 194 pounds of contraband Mexican bologna into the US at the New Mexico border, Customs and Border Protection announced. Agents stopped a Nissan SUV at the Columbus border crossing; searched the vehicle; and found 22 large, red packaged rolls in the trunk and some “hidden” in the driver’s luggage. The agency says “bologna is a prohibited product because it is made from pork and has the potential for introducing foreign animal diseases to the US pork industry.” (“What are you in for?” “I was apprehended smuggling deli meat.”)

It ain’t easy being cheesy… In Oklahoma, a Tulsa woman was arrested in connection to an attempted home burglary after police found CHEETOS® residue on her teeth. A woman at the residence told responding officers that she was home with two small children when a woman climbed inside through a window. Officers discovered that the suspect had pried a screen off the window in order to get inside, but left before stealing anything or harming anyone. Police said the suspect left a bag of CHEETOS and a bottle of water on the floor near the open window. Police said the suspect was subsequently found with residue from the snack still on her teeth and she was arrested to face charges of first-degree burglary. (It’s kind of like putting a dye pack in a money bag.)

“Hold my drugs while I write down these directions”… A hoodlum in Joliet, Illinois, spotted a car which was left running while the owner was inside a convenience store. Seizing the opportunity, he climbed in and drove off into the sunset. But, it wasn’t long before he realized that he wasn’t familiar with the area. So, when he spotted a police officer, he stopped and asked the officer for directions. It hadn’t dawned on this mastermind that the owner of the car had already reported it as having been stolen. (Afterwards, he was given an escort.)

Cat-scratch fever… A 56-year-old woman was arrested at her home in Largo, Florida, after throwing her cat in her 73-year-old male roommate’s face. Arrest records reveal that the cat reacted by scratching the roommate. Police say the woman then struck the male roommate in the face. She was charged with domestic battery on a person over the age of 65. As it turns out, the woman had been arrested in 2018 for allegedly battering the same man, described in court documents as a platonic roommate. (Talk about having a catfight.)

Guilty of love in the first degree… A man engaged in a video chat with a woman in Broward County, Florida, and thought he’d let her know what he thought about her. “I just had to tell you: You’re gorgeous,” said the man. “Flattery will get you everywhere,” the woman replied. “But, maybe not here.” “Here” was actually the man’s bond hearing as it was being conducted in a virtual courtroom. By the way, the woman he tried to butter up was actually the judge. A prosecutor asked her to set bail at $7,500, leading the man to shout “WHAT?!” The judge ended up setting the bond at $5,000, but the man still had to go back to jail. (You miss 100% of the shots you don’t take.)

Is the irony lost on anyone that robbers usually wear masks?… A California man who was denied service for not wearing a mask at a fried chicken restaurant in Pasadena allegedly returned with a gun and held up the restaurant, robbing the business of fried chicken and waffles – but not cash. According to police, the suspect initially entered the restaurant to order food, but was denied service by the staff because he was not wearing a mask. The man then left, but soon returned with a gun. Brandishing the weapon, he told an employee to put all the chicken in the bag. He didn’t take or demand any cash from the restaurant – only chicken, syrup and waffles. Ironically, surveillance cameras were able to capture images of the man’s face due to the fact that he was still not wearing a mask. (“Leave the gun, take the chicken.”)

That’s one way to get quick service… Paramedics were recently dispatched to an apartment complex in Houston, Texas. While they were dealing with the emergency, a man jumped into their ambulance and drove away. But, his criminal act was doomed to fail because the ambulance was equipped with GPS technology which allowed the police to pinpoint exactly where he went. It appears that the thief may have stolen the ambulance because he was hungry – GPS revealed that he went straight to the nearest Jack in the Box® drive-thru. He had the emergency lights on and was ordering food when he was arrested. (No “Happy Meal®” for you today!)

After three months without a bath, his stolen ID wasn’t the only thing which gave him away… At Chicago’s O’Hare International Airport, two employees of United Airlines approached a man and asked for his ID. The 36-year-old resident of Orange, California, produced an employee badge, but it was not his: Another employee had previously reported it missing. Authorities said the man had arrived at O’Hare and was too afraid to fly back home because of COVID-19, so he hid in a secured area of the airport for three months, living off food given to him by strangers. The man is unemployed, but has a master’s degree in hospitality and doesn’t have a criminal background. He was charged with felony criminal trespass. (He could have walked home in that time.)

“Give me all your money or I’ll shoot this gun into the pneumatic tube”… In Michigan, Bay County Sheriff’s deputies are investigating a bank robbery committed at a drive-thru window. Bank employees told the responding deputies that a male had driven up to the drive-thru window and passed a note demanding money through a pneumatic tube, he explained. The teller surrendered an undisclosed amount of cash to the robber, the sheriff said. The robber then drove away from the scene. The sheriff could not provide further details, including the reason why the teller handed the money over to the drive-thru robber via a pneumatic tube. (Criminals have become lazy these days.)