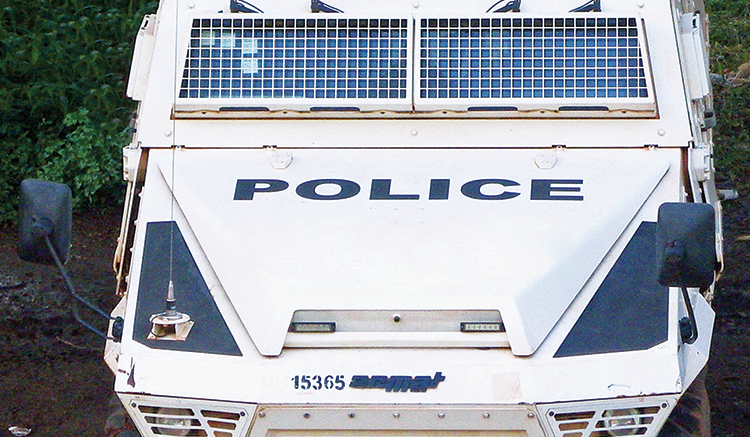 Advances in ballistic protection technology have made adding armor to law enforcement vehicles easier and more affordable, eliminating the need for “patrol cars” like the one shown below.

“Let’s be careful out there.”

With these words, Sergeant Phil Esterhaus (played by Michael Conrad) closed the daily roll call which signaled a new episode of the beloved “Hill Street Blues,” a television show on NBC which aired from 1981 to 1987. The police procedural created a new style TV show using handheld cameras and it featured an ensemble cast portraying the daily activities of a fictitious police precinct. It provided the audience with a mix of action, humor, drama, sexual innuendo, and gritty action seldom seen before…just another day on the job, right?

“Hill Street Blues” soon became “must-see TV” for cops across the country who blocked off every Thursday night to watch and, if they were stuck working evenings or dogwatch, they set their VCRs to record every episode. (If you’re too young to know what a VCR is, call my editor.)  Like the Joseph Wambaugh novels which preceded it, there were characters on the “Blues” we all could identify with because we worked with all of them…the joker, the slacker, the suck-up, the whiner, the coward, the ladies’ man, the gung ho, and the by the booker…well, you get the idea.

In my years as a sergeant, I conducted well over 4,000 daily roll calls. My different assignments didn’t change or vary the requirement of daily roll calls, whether it was uniform patrol, vice, narcotics, burglary, auto theft, pawnshops, or career criminal: Every tour of duty began with a mandated roll call. Business came first – crime reports, BOLOs, individual and group assignments, department information, personnel issues, and finished with BS sessions if we had time. I readily admit that I closed a bunch of roll calls by borrowing Sergeant Esterhauser’s admonition to be careful – be it for inclement weather, bad guys, new bosses, or IAD lurking about; that simple statement of concern covered the gamut.

Roll calls get in your blood and still live in my memory. Even today, fellow retirees from my alma mater and I are E-mailed the daily roll call bulletins. Despite being out to pasture for 30 years, I’ve always felt I could suit up and head to the nearest station tomorrow and hold roll call and never miss a beat. But, reality soon sets in and I realize the uniform won’t fit; I don’t recognize the acronyms of dozens of new units and procedures; and I’d never catch up with all the high tech.

As of December 1, 2020, 262 brothers and sisters of American law enforcement have perished in the line of duty and we’re on track to set a new sad record. Although the numbers vary depending on the source, at least 150 have died from COVID-19 contracted on duty. Other deaths have resulted from ambushes, car stops, radio calls, and civil disturbance.

Injuries as a result of the estimated 8700 “peaceful protests,” aka riots across the country which followed the death of George Floyd, now number over 2000 and are tough to comprehend as well. Officers have been assaulted with rocks, bricks, frozen water bottles, clubs, lasers, Molotov cocktails, and commercial-grade fireworks. The NYPD alone has experienced 472 injured officers, 319 of which have required medical attention and a handful have medically retired. Our K-9 partners have not been exempt from danger this year, either, as several have been injured or killed.

Across this country, morale is low or nonexistent due to anti-cop protests and threats to defund departments – or even shut them down completely – and to replace them with some kind of social workers or unarmed peacekeepers. Lots of luck with that.

Eighteen major US cities are now without chiefs because they resigned or retired because of unrelenting pressure, harassment and the defund movement. Rank-and-file retirements are increasing at an alarming rate which is leaving big cities with barely enough officers to respond to calls for service. But, the biggest threat to cops nowadays is not what’s happening on the streets; it’s what’s going on behind the closed doors at city halls and police headquarters and, really, this is nothing new – it’s just worse.

We’ve Got Your Six

But, loyal readers, take heart as we take a break from the 2020 doom and gloom for a minute to remind you that, here at P&SN, we have your backs. Every issue brings you real information you can use, from the latest in tactics, weapons and equipment to the newest safety advancements for your vehicles. We always have and we always will.

This column continues the topic of vehicle safety with new products from aftermarket companies.

While we may wish we all had armored cars as duty vehicles, we recognize this is fantasy as only federal agencies can afford the expense. However, several companies have stepped up to provide a degree of armor protection for police vehicles. (It should be noted that both Ford and Chrysler also offer optional armoring for the front doors of their cruisers.)

Angel Armor’s AVAIL® Ballistic Door Panels transform vehicle doors into tactical shields protecting against Level lllA or Level lll+ threats. Their panels are transferable and easy to install (inside factory door panels) in 30 minutes to two hours, depending on the level of protection desired. The panels do not interfere with window operation and feature a weatherproof coating which helps to resist environmental wear and corrosion. They do not require cutting, welding or special tools and provide safety you can literally stand behind. Angel Armor’s panels are available for all of the popular police vehicles. (angelarmor.com)

DEW Engineering and Development’s DEWPD Ballistic Door Panels offer protection levels NIJ lllA and NIJ III+ and have now added Level lV+ protection (armor piercing). They convert OEM police vehicle doors into protective shields which are integrated inside the door between the outer metal and the inside door panel and their policy is to never add more than 50 pounds per door.

DEW manufactures the (optional) ballistic armor installed in the Ford Police Interceptor® Utility doors and has now branched out to offer armor panels for Chevrolet and Dodge models which can be shipped directly to the agency or their upfitter. (dewpd.com)

Back in April of 2020, Havis, Inc. announced a partnership with Hardwire to provide mission critical ballistic armor for public safety vehicles. Hardwire Ballistic Armor by Havis armor kits offer a complete external solution which includes an exterior door with door handle protection, as well as a window insert solution. The product origins began with the military. These products are now standard for both the New York and Philadelphia Police Departments. They are available for all pursuit-rated LE vehicles from Ford, Chevrolet and Dodge.

The armor offers NIJ Level lllA armor protection and tests confirm they stop .357 SIG and .44 Magnum ammunition fired from longer barrel handguns, as well as shotgun fire. This enhanced armor is comprised of lightweight, ultrahigh molecular weight polyethylene ballistic material. The protective ballistic covering can be color matched to the vehicle’s paint color and department graphics can be installed on the panel. The entire upfit takes approximately 15 minutes per door. The armor is easily removed when a unit is damaged or retired and is easily transferrable to other like units.

Glass is the most vulnerable area on any police car and Hardwire has developed protection for the driver’s and passenger’s windows. Their transparent armor window insert is a custom designed piece of transparent armor which seamlessly covers half of the existing window in a police car door. It provides ballistic protection for the officer while still allowing for community engagement. The window insert protects against handgun and shotgun rounds and requires no modifications to the car. The OEM window still operates normally and the ballistic window insert is easily removable. It is my understanding that both ballistic door and window armor for the new 2021 Chevy Tahoe will be available shortly. (havis.com)

NIJ Level IIIA ballistic door panels from Pro-gard are manufactured from Kevlar® and are designed to optimize the coverage area for various makes and models. The weatherproof panels’ bolt in design requires no vehicle modifications and are made for both driver and passenger side doors. (pro-gard.com)

We certainly hope that this column was meaningful for you and, if it saves one officer’s life, it was a success. Oh, yes, before I close…let’s be careful out there.

Sergeant James Post appreciates your comments and suggestions for future columns. He can be reached at kopkars@arkansas.net.