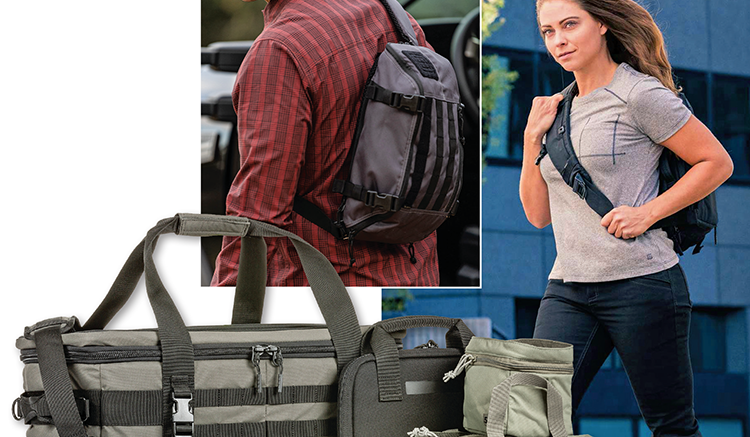 What are called “go bags” are really just gear hauling bags – better referred to as “ready bags.” They are distinguished from paper grocery sacks and generic gym bags by 1) their sturdy materials and construction; 2) their suitability for traversing rough terrain (urban or wilderness); and 3) their compartmentalization and organization optimized for some tactical gear or purpose.

Ready bags are also well-suited for many law enforcement and first responder activities:

In addition to the above law enforcement uses, off-duty ready bags of this sort sometimes go by cutesy names for disastrous events:

One mistake which many people make is to confuse a ready bag with a wilderness survival kit. An urban get home bag, for example, will require very few wilderness-type items.

Ready bags appropriate for all of these situations come in three basic configurations: backpacks, sling packs and messenger bags (lumbar bags are usually too small for this purpose). Backpacks can carry more load and are more comfortable for long treks, but are harder to access. Sling bags ride on the back, go on easier and you can access them without stopping or taking them off, but they put all of the load on one shoulder. Messenger bags ride on the hip and shoulder and are the easiest to access, but probably the least comfortable for heavy loads or long stretches and are not easy to run with.

Ready bags can also have a tactical look or not. By “tactical look,” I mean a military color (black, grey, tan, green, or camo) and with PALS webbing on the outside. Tactical-looking bags by the major vendors are generally of high quality and their PALS webbing makes them modular which is one of their main benefits. On the other hand, to genuine bad guys, they stick out as “shoot me first” target indicators and as such are best suited for obvious law enforcement tasks or applications where blending in isn’t an issue, such as maybe a get home bag. For an EDC ready bag or a civilian active shooter response bag, something more low-key is a better choice. Civilian vendors such as JanSport®, North Face®, Timberland®, Kelty®, etc. make a lot of packs every year, so they know something about how to do it and many of these packs are well laid out for organizing tactical and emergency gear. If you think that they won’t hold up as well as a special “tactical” bag, well, consider that every day many of them are loaded up with heavy school books and tossed, dropped, thrown, and generally abused by teenagers who aren’t known to be gentle on anything. Also remember that these same “civilian” vendors often make special packs for military units.

How Big Is Yours?

Focusing just on backpacks, you want to choose the right size for your application. If you choose too big a pack, you incur a clumsiness which you don’t need. On the other hand, you want to make sure your pack is big enough to carry all it might have to. A pack over 30-35 liters (1800-2100 cubic inches) tends to look large on most people in a civilian setting and may attract attention.

Packs may or may not have supportive frames which distribute the load and help transfer the weight to a belt. Small packs usually have no support; some midsize packs have a polymer (usually HDPE) frame sheet or metal stays. Larger packs usually have more elaborate suspension systems. An appropriate frame can make all the difference in comfort when the load exceeds 20-30 pounds.

There are two significant questions you should ask when making choices from among the alternatives described above. First, what features or durability will you need if the bag is used in a reasonable worst-case scenario? Second, how often will the bag be used (which relates to durability)? That is, will it be used on a regular basis or will it be “transported much and deployed seldom”? If your bag will be used often and hard, then you want top-shelf; if it will be seldom used and/or gently, then you have more options.

Items You May Not Have Thought Of

There are lots of lists of contents for any, and all, of the “ready” type bags available on Web sites and in print magazines and blogs. Remember, though, what you need depends a great deal on the needs and capabilities of you and those under your care. Everyone has an opinion and I don’t want to add yet another list here which, in any case, would be relevant only to me in some specific situation. Instead, what follows are just a few items which aren’t often thought of which you may want to consider for your bag, depending on its purpose: