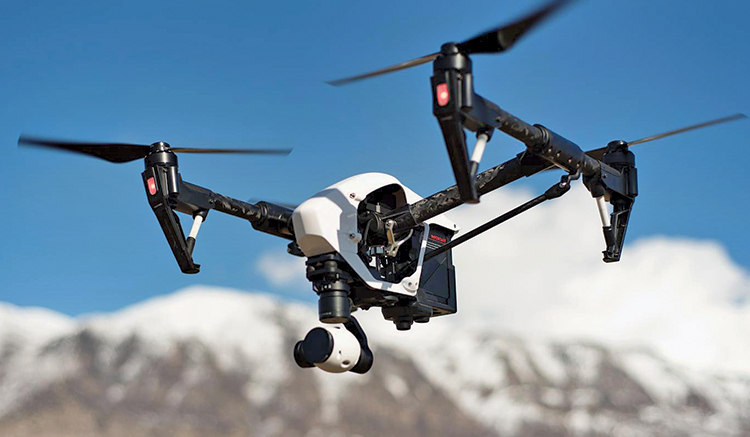 The old “Adventures of Superman” TV show started with, “Look, up in the sky! It’s a bird…it’s a plane…no, it’s…”

…Officer Friendly! It is?

Yes! I’m not talking about a police officer wearing a cape. I’m speaking about unmanned aerial systems, better known as “drones.” Quadcopters (as they are also called) have become more than just wondrous playthings for retired cops who write for magazines and are frustrated pilots (I wonder who I could be talking about), but they have long been big money savers for movie producers, terrain mappers, and, now, high-tech assets for law enforcement. Police agencies all over the world have been using drones for over a decade for everything from search and rescue, chases, and, yes, surveillance. As you would expect, the latter term has sent many members of the far left into a tizzy.

Anything which even brushes up against the Fourth Amendment usually does rustle a few feathers – even I am a staunch libertarian when it comes to personal privacy – but the whirring blades and powerful camera of a DJI Phantom overhead sends the more paranoid citizens sprinting to the nearest ACLU office and shrieking about “Big Brother.” Arguments about what is a “reasonable” search and/or seizure go way back. I’ve always been fascinated with these arguments. I could even be considered a kind of amateur Fourth Amendment geek. Was the search of Dolly Mapp’s house – with the fake warrant – reasonable and fair? No, of course it wasn’t. Great decision there. Was the Cleveland detective’s famous pat down of the defendant in Terry vs. Ohio warranted and reasonable? Heck, yes it was and that very important case gave us “stop and frisk” (which has been turned into a bad word, unfortunately) and the very important distinction between reasonable suspicion and probable cause. Fourth Amendment battlegrounds have made us better, more responsible and more resourceful cops.

But, what about drones? Why is an eye in the sky which is being piloted remotely looked upon so differently than a helicopter, piloted by someone sitting inside the aircraft? It is a compelling question and not unlike the same inquiries posed in other Fourth Amendment cases about “enhancement” of human surveillance tactics: If I stand on a street corner and I can look inside someone’s window and observe a heroin deal going down with the naked eye, why can’t I do the same thing from 200 yards away with a pair of binoculars or a camera with a powerful zoom?

Why can I smell marijuana smoke and generate a perfectly legal search of a vehicle, but I can’t use a dog who smells marijuana from outside of a home and have probable cause there?

It’s the enhancement of the search which SCOTUS has historically frowned upon and that’s why the tussle about drone use continues.

I own a DJI Mavic Air. I fly it just about every weekend, weather permitting, and I love the thing. It is a very easy little aircraft to fly and, with the obstacle avoidance sensors it has fore and aft and on the bottom, it’s damn near crash proof. The video and stills I have been able to shoot are impressive, too. At an altitude of 150 feet, this drone is so small (about the same size of this magazine) that it becomes a speck in the sky and it can fly (or hover) for approximately 18 minutes on one battery. It would go completely unnoticed – and, at that altitude, unheard – in most situations. Is that an enhancement which would get the Supremes all squirmy? I know that another technology which law enforcement used to have ended up on the cutting room floor not long ago: GPS trackers. The Supreme Court slapped our hand on that enhancement because, they said, placing it on a suspect’s vehicle is an unreasonable search and seizure. I kind of get that, but, again, I go back to this comparison: If I am tailing the same suspect in a car, or with a surveillance team, I am accomplishing the exact same thing. In fact, human surveillance is way more intrusive than electronic tracking because, when the subject parks that car and walks away from it, all I am looking at with the GPS system is a stationary car on computer map. With human eyes, I am watching where the subject goes and what he does.

Then, we have the whole argument about where and when you have a right to privacy. I would agree that my Mavic Air can watch, record and follow from angles and places I can’t readily get to with my human limitations. It can also enter smaller airspaces and a wider range of low altitudes than a helicopter can. But, if Pee Wee and Taco (these are our two drug dealers, bear with me) are exchanging money and small packages of little white powder in the park, what is wrong with my Mavic Air watching and recording it from 80 feet above them? The park is a public place. If there was a business across the street and I could get on the roof and observe the same activity, what would be the difference? Then, if Pee Wee spots a police car coming around the block and starts running through alleys and over fences, I can fly over him and never lose track with the drone. Would anyone have an argument against the fact that we just used a $700 aircraft to pinpoint the location of a fleeing criminal, rather than the thousands of dollars it takes to keep a helicopter (and its pilot) in the air?

We are going to have these arguments for a long time. We will have them because drones are getting faster and smaller, and are being outfitted with more capable camera systems. GPS satellites help remote pilots navigate them now, but don’t kid yourself about what’s coming to make the drone a real superhero: artificial intelligence. Imagine this: A drone which identifies Pee Wee’s face from previous booking photos and, based on his last known address, is already alerting a second drone – waiting in a pod – which will launch from the other side of the neighborhood and head towards his house. As Jed Clampett would have said, “Wheee doggie!”

Does this sound far-fetched? My stepson works in computer robotics at UF and he said that programming such a scenario would be pretty simple.

The ACLU better have a big waiting room.