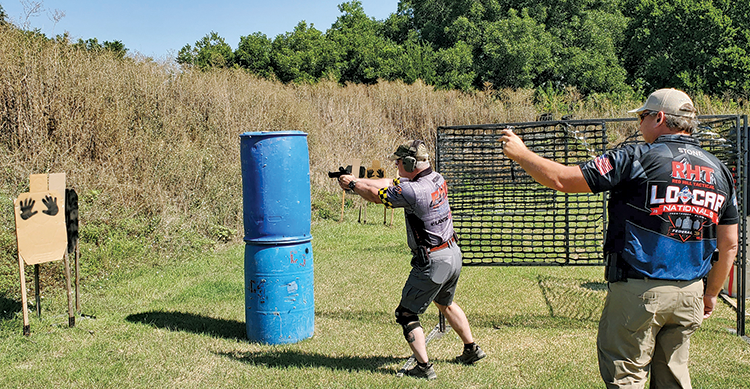 Practical shooting sports evolved from groups of law enforcement officers, military people and private citizens looking for ways to improve on the techniques, training and equipment of the day. Competitions evolved to test what had been learned and quickly became matches requiring competitors to deal with constantly changing scenarios while shooting rapidly and accurately.

Many of the advances in firearms and firearm accessories can be traced back to competitive shooting. Optics on carbines and handguns, as well as holster designs, can trace their roots back to various shooting sports. Similarly, numerous features found on today’s firearms are direct descendants of custom touches added by competitive shooters seeking to gain an advantage. Moving and falling targets, shooting on the move, shooting from cover, reloads, and many other things we take for granted on the range today were all derived from those early matches.

Many law enforcement officers who prevailed on the street were able to test and polish their skills on the competitive range. The late Jim Cirillo, a member of the New York City Police Department Stakeout Squad, was a veteran of over a dozen gunfights. In his book, Guns, Bullets and Gunfights, Cirillo explained why men who had performed well in the competition shooting arena were sought after by the renowned NYPD Stakeout Squad: They were already accustomed to shooting accurately under pressure. Based partly on performance on demand under pressure, Cirillo became a fan of practical pistol competition.

What’s in It for Me?

When you attend your first shooting match, do not expect to win. Don’t even expect to be one of the best shooters. Set your ego aside. First, learn the rules and how to shoot the courses of fire safely. Far too many law enforcement officers stay away from competitive shooting because they let their egos get in the way. Texas Department of Public Safety Ranger Trace McDonald has been shooting competitively since 2007. He suggests that new shooters find a local club and bring a friend for support. He believes regular participants of competitive shooting matches will outshoot most law enforcement officers when they begin competition shooting.

I’ve also heard some officers say, “Competitive shooting will get you killed!” Most who say this have never shot a match before and have no idea what they’re talking about. Competitive shooting isn’t training. Instead, it’s an opportunity to practice old skills and develop new skills in a safe environment. It’s not designed to teach you tactics, but it will definitely help you develop better firearms skills. Competition is a test which will show both your strengths and weaknesses. Those weaknesses are the same ones you are going to have on the street. Competition shooting will show you what you need to improve and gives you the opportunity to practice while having a good time.

Another reason to try competitive shooting is that it provides a place to work on skills under stress. It may not be the same life-threatening combat stress you may encounter on the street, but neither competitive shooting nor force-on-force training includes an expectation of death or serious injury if you fail to perform better than your adversary. However, match shooting requires that you shoot on demand, without a warm-up, under time duress, on the clock, and in front of other shooters and spectators. This adds stress to your performance and can benefit you when there’s actually a risk of death or serious injury. Ranger Trace McDonald sums it up nicely, “The stress of shooting on a timer, and from awkward positions, can help prepare you for real-world encounters.” A side benefit for firearms instructors is that this will help them become more comfortable performing demonstrations in front of students.

The amount of time and money needed to compete is shooter dependent. As a law enforcement officer, you already have all the equipment you need to get started. A quality holster, magazines, magazine pouches, eye and ear protection, and a duty pistol are all you need to hit the range. On the other end of the spectrum, you can spend a lot of money buying “race” guns and other specialized equipment. Again, it all depends on your personal goals.

The same is true of the time commitment. Depending on your location, you may have the opportunity to participate in one match per month or you may have the chance to shoot multiple matches each week. Most club level matches take about three to four hours, but major matches can take up to two days. Let’s say you shoot one club level match each month for one year. This translates to an additional 36-48 hours of range time annually. While you may only be shooting for a small portion of that time, you are (hopefully) watching and learning from other shooters during the entire time.

Where Do You Start?

There are many different forms of competitive shooting. As a result, there’s something for everyone. So, whether your tastes run towards Cowboy Action Shooting™ or precision rifle, you will find something which suits your needs and interests. Even GLOCK® has gotten into the mix with the GLOCK Shooting Sports Foundation (GSSF) (gssfonline.com). For most people, competitive shooting is pure sport conducted with little thought to the self-defense aspect of firearms use. However, the different competitive shooting sports will help officers improve the skills they need to prevail in a gunfight.

For law enforcement officers, three of the most popular shooting sports offer a safe shooting environment where all skill levels can improve their abilities in a competitive environment. In no particular order, the three most popular shooting sports include the United States Practical Shooting Association (USPSA), the International Defensive Pistol Association (IDPA) and 3-Gun. Let’s take a little closer look at what makes these sports different and how they can help you as a law enforcement officer.

In all practical shooting competitions, the elements of shooting rapidly and accurately are important. However, depending on how different courses of fire are scored, one of these elements may be slightly more important than the other. In USPSA shooting, accuracy is very important, but shooters must balance speed with their ability to make accurate shots. The time it takes to complete a course of fire is important when shooting these matches.

USPSA shooting includes something for everyone. If you’re interested in competing with your duty gun, then Production Division is a great place to start. If you’re interested in running the latest and greatest high-tech equipment, then Open Division is home to the race guns. There’s also a place for everything in-between, so no one should feel like they have to spend a lot of money to have a great experience shooting a USPSA match.

USPSA rules are mostly focused on safety and ensuring competitive balance within different divisions. The stages of fire in a typical USPSA match are focused on accuracy, speed and solving technical problems. Competitors try to figure out the fastest way to shoot a stage accurately. This takes practice to figure out when to shoot each target; when and where to conduct reloads; and how to move through the stage in the most efficient manner. This kind of movement is very good for officers since a lot of shooting in a USPSA match is done on the move or after dynamic movement.

For more information on USPSA clubs, events and membership, go to uspsa.org

International Defensive Pistol Association (IDPA) matches are meant to simulate self-defense and real-life encounters. The organization has more than 25,000 members in over 70 countries. IDPA prides itself on the use of practical equipment, including full power service ammunition, to solve simulated self-defense scenarios using practical handguns and holsters suitable for self-defense use.

Prior to IDPA, there was no place to compete with your concealed carry handgun and holster without being at a competitive disadvantage. While some of the other shooting sports have become equipment races, IDPA has fairly strict equipment rules to help level the competitive field. One advantage to IDPA matches is that sworn law enforcement officers can be competitive using their duty gear. There are no “race guns” or holsters allowed in IDPA. Different types of firearms are placed into different divisions based on their design. IDPA divisions include Custom Defensive Pistol, Enhanced Service Pistol, Stock Service Pistol, Compact Carry Pistol, Carry Optic, Revolver, Back-Up Gun, and Pistol Caliber Carbine.

In order to further level the playing field, IDPA competitors are divided into classifications within each division based upon their skill level. Each year, IDPA competitors shoot the classifier course which is similar to a law enforcement qualification course. Based on the shooter’s score, they are assigned a skill classification of novice, marksman, sharpshooter, expert, or master. The different divisions and classifications within IDPA ensure everyone is competing with shooters of similar ability.

The scoring system used in IDPA matches rewards accurate shooting. For each shot outside the center mass scoring area, time penalties of one, three or five seconds are assessed. So, even though speed is important just like in a USPSA match, the penalties for not making center mass hits is greater. Additionally, since IDPA is meant to simulate self-defense scenarios, penalty time is assessed for not using cover correctly or not engaging the nearest threat first.

For more information on USPSA clubs, events and membership, go to idpa.com

3-Gun matches are the fastest growing segment of competitive shooting. 3-Gun is a generic name used to describe shooting competitions in which participants use handguns, carbines and shotguns to engage targets from a variety of shooting positions. Each stage in a match requires the shooter to use a different firearm and to transition between them. There are a number of sanctioning bodies and clubs running 3-Gun matches, including USPSA, 3-Gun Nation, the National Rifle Association (NRA), International Multi-Gun Association (IMA), and the United Multi-Gun League (UML). Each of these have slightly different rules and divisions, but the nature of the events is basically the same. Just like USPSA and IDPA matches, the equipment rules vary by division and include options for everyday firearms, as well as “anything goes” Open and Open Outlaw divisions.

In a typical 3-Gun match, shooters will engage a variety of targets, including clay pigeons, cardboard silhouettes and steel targets of multiple shapes and sizes. Target distances usually depend on which weapon system the shooter is expected to use and may be from contact distance to over 400 yards. Each stage will test a shooter’s ability to reload each weapon system, transition between firearms, and engage multiple targets with multiple rounds. Some people have described shooting 3-Gun matches as a drag race with multiple firearms.

I’ve been shooting competitively for about 16 years and I was amazed at how much my skills improved in the first year. The more matches I attend, the more I realize that mastery is a journey. Competitive shooting is a learning process. Find a local club, take a friend and take the plunge into the competition arena. Check your ego at the door and don’t be afraid to ask questions. Take it easy until you learn the game. It’s a great way to improve your skills, meet new people and have a lot of fun.

Todd Fletcher has over 25 years of law enforcement experience, with assignments to patrol, criminal investigations and training. He has presented instructor development training nationwide and at multiple regional, national and international conferences. He owns Combative Firearms Training, LLC which provides firearms training and instructor development classes to law enforcement, military, private security, and armed citizens. He can be contacted at todd@combativefirearms.com.