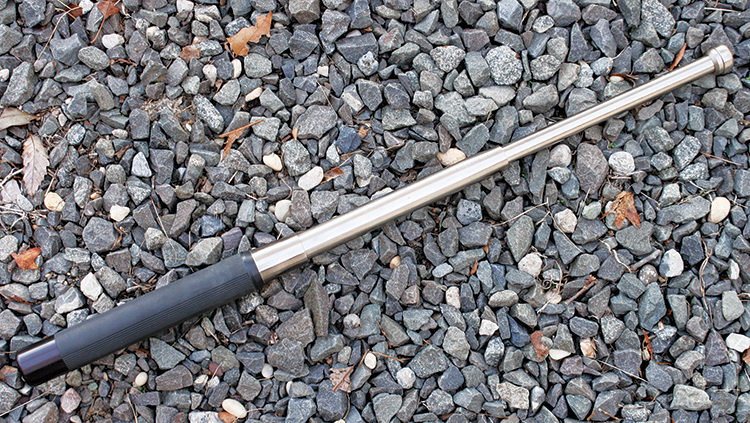 Like many individuals who have been around the game for a while, I have trained with or carried a multitude of intermediate force options including Mace®, OC spray, different types of batons, and a conducted energy device.

One common quality is that all of these tools were promoted as being able to quickly shut down the aggressive behavior of a determined adversary. Under optimum conditions that may be true, but a harsh reality is that there is no handheld weapon, including a firearm, which is going to be effective 100% of the time. Circumstances beyond our control – such as environmental conditions, proximity and a wide range of subject factors such as skill, size and mental state of the subject – enter into the equation and that tool which worked great in training often comes up short.

Perhaps it’s my old school mentality, but I have long been partial to impact weapons. Batons don’t require a battery, are not deflected by the wind, and are not likely to contaminate bystanders. A baton can be a multipurpose tool and can be used to block incoming blows from an adversary, strike or to control and restrain. Unfortunately, impact weapons suffer from an image problem and, in many quarters, have fallen from favor. That is most unfortunate because, in trained hands, a baton is an extremely versatile and effective force option.

Many years ago, I was given some rudimentary instruction on the straight baton at the police academy. Training was cursory at best and, as a result, I wasn’t especially confident in the baton and seldom carried it. In the early 1980s, I became familiar with the PR-24 side handle baton and attended a very comprehensive instructor training course. I became a true believer and made it a point to slip it into the ring whenever I stepped away from my patrol vehicle. Some of my peers were less enamored with the PR-24 and never carried or practiced with it. This was evident when I provided their annual recertification training. Expandable straight batons soon worked their way into the mix because it was a tool which would always be carried on the belt and, unlike the PR-24, many of the techniques were intuitive.

I, too, bought into the concept of the expandable baton, but there was a fly in the ointment. For one, I quickly came to the conclusion that they weren’t especially durable. In very short order, I bent my first example during a training session and this was hardly an isolated incident. Additionally, I didn’t feel it delivered the same level of power as my PR-24 and, in a worst-case scenario, would prove ineffective against a determined adversary. The idea of having an impact weapon readily available was great, but the design was flawed.

Recently, I had the opportunity to review the Peacekeeper Rapid Containment Baton (RCB) which addresses many of my concerns. If I could use just one word to describe the Peacekeeper RCB, it would be “formidable” and it is indeed the .45 ACP of expandable batons. Circumference of the grip is similar to that of a fixed straight baton and the gripping surface is rendered from Santoprene™ rubber. The telescopic tubes are beefier, are machined (as opposed to swaged) and are of equal thickness through the entire length. This gives the RCB a weight forward balance which puts more kinetic energy on target resulting in faster incapacitation.

The Peacekeeper RCB is available in 21, 24, 26, and 29 inch lengths. The 21 inch model could be utilized by plainclothes officers while the 24 and 26 inch copies are well-suited for uniform patrol. The long 29 inch model might be just the ticket for crowd control. Samples in 24 and 26 inch lengths were received for test and evaluation along with a Secure-Lock Rotational Holster.

My sample batons were finished in corrosion-resistant electroless nickel which is better suited for working on, or near, marine environments. A business-like black zinc finish is also available. I felt that the 24 inch version best suited the needs of my outfit and my evaluation focused on that.

The RCB is slightly heavier than same length competitive models, but this is not noticeable when the baton is worn on the belt. When executing striking techniques, the weight forward balance is clearly evident. While this is hardly a scientific observation, strikes on a heavy bag sounded harder and felt far more powerful than with the other expandables I had on hand. More powerful strikes will result in faster incapacitation and less risk of serious injury to the officer and subject. In close quarters, a broad end tip also lends itself to jabbing techniques with minimal risk.

The Peacekeeper RCB can be quickly opened from the collapsed position with a smart downward stroke. If a less overt opening is desired, pulling on the end cap will also open the baton. Collapsing the baton for return to the belt has often been a problem with many expandable batons. Not so with the RCB! While holding the RCB on an angle, tap the tip on a hard surface while rotating the grip in the hand. This will unlock the baton with very little effort. Use the palm of the hand to press down on the tip to fully collapse the RCB.

I was also impressed with the Secure-Lock Rotational Holster. The holster is threaded on the duty belt and secured in place with a pair of screws. It can be instantly adjusted for a 30, 60 or 90 degree rake depending on user preference. Should an officer not have an opportunity to collapse the baton, it can be returned to the open bottom holster in the fully extended condition. Vertical ridges in the bottom of the holster will retain the RCB during typical physical activity. In addition to the Secure-Lock Holster, Peacekeeper also offers a nylon MOLLE holster which can be affixed to a vest. Various end caps such as a retention model and glass breaker are also available.

Today, agencies can choose from a wide range of force options in order to keep their officers safe. Conducted energy devices such as the TASER® all have their place, but there have been a number of high-profile failures when officers had to resort to deadly force in order to maintain control. One can only speculate about how a trained officer with a high quality impact weapon would have fared in those situations.

In addition to the RCB family and accessories, Peacekeeper also offers instructor level training. If you are looking for a more effective impact weapon, be sure to check out the offerings from Peacekeeper. Check out their full line at peacekeeperproducts.com