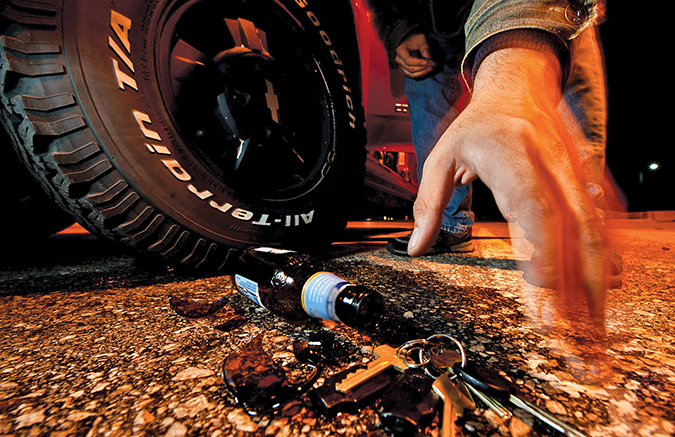 Is a warrant required for a blood test when an officer has probable cause to believe a motorist has been driving while under the influence of alcohol, but the motorist is unconscious and cannot be given a breath test?

Recently, in Mitchell v. Wisconsin (U.S. 2019), the United States Supreme Court said, “No.”In such cases, “the exigent circumstances rule almost always permits a blood test without a warrant. When a breath test is impossible, enforcement of the drunk-driving laws depends upon the administration of a blood test. And, when a police officer encounters an unconscious driver, it is very likely that the driver would be taken to an emergency room and that his blood would be drawn for diagnostic purposes even if the police were not seeking BAC [Blood Alcohol Concentration] information. In addition, police officers most frequently come upon unconscious drivers when they report to the scene of an accident and, under those circumstances, the officers’ many responsibilities – such as attending to other injured drivers or passengers and preventing further accidents – may be incompatible with the procedures that would be required to obtain a warrant. Thus, when a driver is unconscious, the general rule is that a warrant is not needed.”

Introduction: Laws in every state prohibit motorists from driving with a BAC which exceeds a specified level. “And, to help enforce BAC limits, every state has passed what are popularly called implied consent laws. As a condition of the privilege of using the public roads, these laws require that drivers submit to BAC testing when there is sufficient reason to believe they are violating the state’s drunk-driving laws.”

Wisconsin’s implied consent law is much like those of the other 49 states and the District of Columbia. “Officers seeking to conduct a BAC test must read aloud a statement declaring their intent to administer the test and advising drivers of their options and the implications of their choice.…If a driver’s BAC level proves too high, his license will be suspended, but if he refuses testing, his license will be revoked and his refusal may be used against him in court. No test will be administered if a driver refuses – or, as the state would put it, ‘withdraws’ his statutorily presumed consent. But ‘[a] person who is unconscious or otherwise not capable of withdrawing consent is presumed not to have’ withdrawn it.…More than half the states have provisions like this one regarding unconscious drivers.”

In this case, defendant Gerald Mitchell was convicted of operating a motor vehicle while intoxicated based on a blood test obtained without a warrant while he was unconscious.

The Case: The facts unfolded in late May 2013, when Sheboygan Police Officer Alex Jaeger responded to a report that an apparently intoxicated Mitchell entered a gray van and had driven off. “Jaeger soon found Mitchell wandering near a lake. Stumbling and slurring his words, Mitchell could hardly stand without the support of two officers. Jaeger judged a field sobriety test hopeless, if not dangerous, and gave Mitchell a preliminary breath test. It registered a BAC level of 0.24%, triple the legal limit for driving in Wisconsin.” Jaeger arrested Mitchell for drunk driving and, as is standard practice, drove him to a police station for an evidentiary breath test.

During the drive to the police station, Mitchell’s physical condition deteriorated. Upon arrival, it became apparent that an evidentiary breath test would not be feasible. Instead, Jaeger opted to transport Mitchell to a nearby hospital for a blood test. “Mitchell lost consciousness on the ride over and had to be wheeled in. Even so, Jaeger read aloud to a slumped Mitchell the standard statement giving drivers a chance to refuse BAC testing. Hearing no response, Jaeger asked hospital staff to draw a blood sample. Mitchell remained unconscious while the sample was taken and analysis of his blood showed that his BAC, about 90 minutes after his arrest, was 0.222%.”

In this appeal, Mitchell argued that the warrantless blood draw violated his Fourth Amendment right to be free from “unreasonable searches and seizures,” because it was conducted without a warrant. The United States Supreme Court disagreed.

The Law: Under the “exigent circumstances” exception, a warrantless blood test may be permitted “to prevent the imminent destruction of evidence.” See Missouri v. McNeely, 133 S.Ct. 1552, 1558 (2013). In McNeely, the Court was asked if this exception covers BAC testing of drunk-driving suspects in light of the fact that blood alcohol evidence is always dissipating due to “natural metabolic processes.” 133 S.Ct. at 1560. The Court determined that the fleeting quality of BAC evidence alone is not enough. In Schmerber v. California, 86 S.Ct. 1826 (1966), however, exigent circumstances “did justify a blood test of a drunk driver who had gotten into a car accident that gave police other pressing duties, for then the ‘further delay’ caused by a warrant application really would have threatened the destruction of evidence.”

“Like Schmerber, this case sits much higher than McNeely on the exigency spectrum. McNeely was about the minimum degree of urgency common to all drunk-driving cases. In Schmerber, a car accident heightened that urgency. And, here, Mitchell’s medical condition did just the same. Mitchell’s stupor and eventual unconsciousness also deprived officials of a reasonable opportunity to administer a breath test. To be sure, Officer Jaeger managed to conduct ‘a preliminary breath test’ using a portable machine when he first encountered Mitchell at the lake. But he had no reasonable opportunity to give Mitchell a breath test using ‘evidence-grade breath testing machinery.’ As a result, it was reasonable for Jaeger to seek a better breath test at the station; he acted with reasonable dispatch to procure one; and when Mitchell’s condition got in the way, it was reasonable for Jaeger to pursue a blood test.”

According to the Court: “When a breath test is unavailable…a blood draw becomes necessary.” Thus, in the case of unconscious drivers who cannot blow into a breathalyzer, blood tests are essential.

In Schmerber, the Court held that there was no time to secure a warrant before a blood test of a drunk-driving suspect because the officer there could “reasonably have believed that he was confronted with an emergency, in which the delay necessary to obtain a warrant, under the circumstances, threatened the destruction of evidence.” So, even if the constant dissipation of BAC evidence alone does not create an exigency,…Schmerber shows that it does so when combined with other pressing needs.

“Thus, exigency exists when (1) BAC evidence is dissipating and (2) some other factor creates pressing health, safety or law enforcement needs which would take priority over a warrant application. Both conditions are met when a drunk-driving suspect is unconscious, so Schmerber controls: With such suspects, too, a warrantless blood draw is lawful.”

“In Schmerber, the extra factor giving rise to urgent needs that would only add to the delay caused by a warrant application was a car accident; here it is the driver’s unconsciousness. Indeed, unconsciousness does not just create pressing needs; it is itself a medical emergency. It means that the suspect will have to be rushed to the hospital or similar facility, not just for the blood test itself, but for urgent medical care. Police can reasonably anticipate that such a driver might require monitoring, positioning and support on the way to the hospital; that his blood may be drawn anyway, for diagnostic purposes, immediately on arrival; and that immediate medical treatment could delay (or otherwise distort the results of) a blood draw conducted later, upon receipt of a warrant, thus reducing its evidentiary value.…All of that sets this case apart from McNeely. Just as the ramifications of a car accident pushed Schmerber over the line into exigency, so does the condition of an unconscious driver bring his blood draw under the exception. In such a case, as in Schmerber, an officer could “reasonably have believed that he was confronted with an emergency.”…Indeed, in many unconscious driver cases, the exigency will be more acute. A driver so drunk as to lose consciousness is quite likely to crash, especially if he passes out before managing to park. And, then the accident might give officers a slew of urgent tasks beyond that of securing (and working around) medical care for the suspect.”

Accordingly, “[w]hen police have probable cause to believe a person has committed a drunk-driving offense and the driver’s unconsciousness or stupor requires him to be taken to the hospital or similar facility before police have a reasonable opportunity to administer a standard evidentiary breath test, they may almost always order a warrantless blood test to measure the driver’s BAC without offending the Fourth Amendment.”

Larry E. Holtz has served as a Detective Sergeant with the Atlantic City, New Jersey, Police Department; a Deputy Attorney General for the state of New Jersey, and an Assistant County Prosecutor. Presently, Mr. Holtz is the Managing Editor of Blue360° Media, the largest US provider of legal information which is solely focused on serving law enforcement.     Mr. Holtz is a certified police trainer and teaches on a regular basis. He is a member of the bar in New Jersey, Pennsylvania and the District of Columbia and is admitted to practice before the federal bar in the District of New Jersey and the Third Circuit.