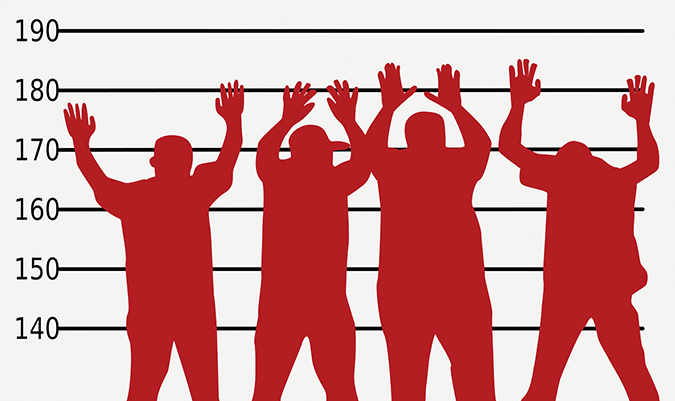 Not quite Ocean’s Eleven material… Video captured three masked men as they tried to steal an ATM from a convenience store in Silver Spring, Maryland. They used their pickup to smash through the front windows of the store, exited the vehicle, and entered the store with a hand truck. The leader of the pack then punched one of his colleagues in the arm for failing to do his part. In the meantime, the getaway driver got nervous and drove off. Finally, the other two managed to get the ATM out the door, only to have it fall off the hand truck and onto one of the suspects. That’s when they realized their ride had left. The thieves then fled the scene, with one of them coming back a short time later to grab the hand truck. Police are looking for suspects. (Well, at least one guy thought to return and grab the dolly – it was probably a rental.)

There’s still a Kmart open?… A man who had recently bought an eight million dollar island off of Key West was arrested for participating in what police described as a scheme to steal $300 in household items from Kmart. Kmart officials called Key West police after they say the 59-year-old accused had purchased several items and returned the original boxes for a refund. But, police say the boxes were stuffed with other items. The store’s loss prevention officer provided detectives with video of him buying and returning all of the items, according to an arrest report. He was charged with grand theft and booked into jail. He told reporters the theft allegation is “complicated” and he’d rather not talk about it. (He probably didn’t have any cash left after blowing eight million dollars on the purchase of a tropical island.)

I’m glad to hear that there was no high-speed pursuit involved… In Florida, sheriff’s deputies said it was an unusual situation when they helped with the recovery of a different type of stolen vehicle – a hot air balloon. The Marion County Sheriff’s Office said it was notified by the Bloomington Police Department in Indiana that a hot air balloon reported stolen in the Midwest had been spotted in Florida. Deputies confirmed the balloon as the missing vehicle and it was loaded up to be returned to its owner in Bloomington. The sheriff’s office said the recovery of a stolen hot air balloon was a first for the department in all of its 175 years. (It would seem that stealing as a profession has its ups and downs.)

Some days, it just doesn’t pay a bank robber to get outta bed… Frigid weather ended up being the downfall of a crook in Waterville, Maine. The criminal was determined to rob the Bangor State Bank. He strolled up to a teller, demanded cash, received cash, and then fled. The only challenge left was to make it across the parking lot. But, it turned out that the parking lot was icy and the robber slipped and fell, dropping his gun and sending money flying everywhere. A state police lieutenant just happened to be in the parking lot at the same time and saw everything unfold before his eyes. It was show time, with the policeman tackling our haphazard thief and holding him down until support arrived. (The sidewalk was slicker than he was.)

The exact opposite of energizing the electorate… In Michigan, Hartford High School received a tip that a student had brought pot-laced brownies to school. The tainted brownies were alleged to have been distributed to the football team in homecoming week “goodie bags” put together by a 17-year-old cheerleader. As it turns out, her motive was to coerce team members to vote for her as homecoming queen. (This is another example of “voter suppression.”)