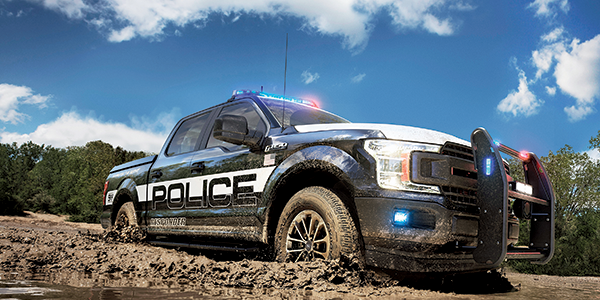 Okay, I’m one of those guys who likes to get the bad news out of the way first. Then, I have something good to look forward to after I’ve had the rug pulled out from under me.

Unless you’ve been on the International Space Station for the last six months, you know that the bad news comes from Ford® Motor Company. Yes, the folks who gave us the Edsel, Pinto and Mustang II have once again made the six o’clock news.

The problem this time is every bit as serious as the CVPI gas tank fires of several years ago: Police operators and passengers in Ford’s Police Interceptor (PI) Utility are being sickened by carbon monoxide (CO) in alarming numbers. So significant is the problem that the Austin, TX, Police Department grounded all 446 of their Ford Explorers and PI Utilities (61% of their entire fleet). After learning of a potential problem, the Austin PD installed CO detectors (in the Fords) and, in five months, 73 vehicles tested positive for CO. This has caused the Austin PD to utilize dated CVPIs and change department policy from one officer per vehicle to two per vehicle.

Similar problems have been detected in PI Utilities used by Henderson, LA, and the Kansas Highway Patrol. By July of this year, 41 officers have been affected by CO poisoning, but by far the most serious case was in Newport Beach, CA, when an officer was overcome by fumes and passed out while driving. He jumped a median, nearly missing several oncoming vehicles, left the road and crashed into a tree, seriously injuring himself. Other officers around the country have either passed out or have tested positive for CO in their bloodstreams and at least one class action lawsuit has been filed on behalf of injured officers. In addition, the NHTSA has opened an investigation.

It is important to note that carbon monoxide problems have only been discovered in the PI Utility and NOT in the PI Sedan or civilian Explorers.

Ford’s response to this issue has become very proactive and they’ve been sending their engineers to departments which have experienced the CO leaks. Engineers soon diagnosed the cause as poorly installed emergency lighting by upfitters or the departments themselves. Access holes drilled for the wiring of emergency lighting (in the rear of the vehicles) were found to be improperly sealed or not sealed at all, allowing deadly fumes to enter the vehicle. You’ll remember from your high school chemistry class that CO is colorless and odorless, so officers can be overcome before they’re aware that it’s happening.

Older readers will remember the good old station wagon days. We could never drive with the tailgate window open without fumes filling the car. It’s the same aerodynamic principle at work here. Like drafting in NASCAR, these fumes are sucked to the back of the Utility and can enter through any opening available.

Many of you veteran readers know that I collected and restored police cars for over 25 years and I found early on that mechanics with drills are far more dangerous than a shark in a swimming pool. After buying a used cruiser, the first thing I did was to pull the trunk mat and start plugging equipment holes with silicone. Many departments’ removal of police equipment prior to disposal is never pretty, and often shoddy, with cut wires (many times hot) and unplugged holes. And, don’t even get me started on how some departments remove decals and markings. I once bought a 1982 Caprice which had been used by three different departments and, when I pulled the carpets, I counted over 30 holes in the transmission/driveshaft tunnel where different consoles had been mounted. Of course, none had been plugged and they let in heat, water, dust, and road noise. By the time I finished, the filled holes contained more silicone than a Hollywood starlet!

Folks, if your department does their own installs, or you farm it out to a local vendor, make certain these wiring holes are sealed! For a few bucks worth of silicone, you can save your officers’ lives.

Ford has agreed to fix all unsealed holes in the Interceptors they find, but don’t wait – you can do it fast and cheap yourself. While you’ve got the silicone handy, I’d suggest filling any non-OEM holes you find anywhere in your fleet. While you’re at it, if you have any of the Chevy Tahoes or Dodge Durangos in service, I recommend you check them, too. No problems have been reported in these vehicles, but because they are SUVs, they do share the same aerodynamics of the PI Utilities.

There have been some concerns that fumes could also be coming from splits in the Utility exhaust manifolds and Ford is also investigating this. Regardless of the origin of the CO, I recommend that you place CO detectors in EVERY Interceptor until the problems have been resolved permanently.

Ford offers an excellent optional upfitting program for the new Interceptors and, as we’ve reported in the past, they have the most complete emergency lighting package of any of their competition. Of course, departments have to save money wherever they can, so many either recycle used emergency equipment or purchase it from cheaper sources. Some naysayers claim that Ford’s findings were Ford’s way to make sure customers purchase emergency equipment from them. That notion is total BS and Ford has stepped up and is actually fixing other people’s screwups! Try to get your local mechanic to do that on your own car.

Ford’s inspection and repair program for the Utilities consists of three phases.  First, they will check and seal off all open holes in the rear of the vehicle where exhaust can enter, regardless of the age, mileage or who performed the original installalation. Second, Ford will update the air conditioning software so that it brings in more fresh air during typical police driving duty. Third, they will check the engine computer software codes which could indicate a damaged or faulty exhaust manifold.

Law Enforcement (LE) agencies concerned about CO issues should contact their local Ford dealerships or they can call Ford directly at the CO Hotline at (888)260-5575.  Ford has also created a video explaining how unsealed holes contribute to exhaust concerns in the Police Interceptor Utility. It’s worth investing the 3.5 minutes to watch if you have any questions surrounding this potential problem: http://tinyurl.com/y9o9yudp.

And Now the Good News from Ford

Ford has announced two more exciting models to add to your police fleet. P&SN had recently reported on the Police Responder Hybrid Sedan Concept which is currently being field-tested and which will be the first pursuit-rated hybrid police vehicle to hit the streets. It will also be put through the paces at this year’s Michigan State Police (MSP) LE Vehicle Tests, September 14-18, 2017.

Ford’s other new entry will also be put through the paces by the MSP – the F-150 Police Responder, the industry’s first pursuit-rated pickup truck. Ford LE trucks are nothing new for Ford. In 2012, we reported on their new 2013 Special Service Vehicle (SSV) F-150 which has since proved popular with agencies in rural and mountainous regions, as well as fish and game agencies and the U.S. Border Patrol. Available in 2WD and 4WD, it has proven to be a light truck contender to both the Chevy Silverado and Ram LE models. Now, with a pursuit rating, the F-150 trucks have become even more versatile in case a pursuit or emergency response is warranted.

The F-150’s military-grade aluminum alloy SuperCrew bodied truck is based on their FX4 off-road model and has a 145″ wheelbase riding on all-terrain tires mounted on 18″ alloy rims. It is powered by Ford’s proven 3.5L EcoBoost engine which provides 375 hp at 470 ft lbs of torque. That horsepower is delivered through their SelectShift® ten-speed, column shifted, automatic transmission and includes a police calibrated braking system. It is equipped with underbody skid plates and a Class IV hitch with a 7,000 lb. towing capacity, the best in its class. The Responder is capable of 100 mph, both on-road and off-road, proving that the bad guys can run, but they’ll never hide again!

And Now for the Really Good News

President Trump continues to keep his campaign promises to support America’s law enforcement. Earlier this year, his administration freed up departments’ ability to obtain surplus military vehicles and equipment which were banned by the Obama administration.

The White House announced on July 21 that the Justice Department will be restarting a federal asset forfeiture program also shut down by the Obama administration. Known as “adoptive forfeiture,” this program gives the good guys greater leeway to seize property of those suspected of criminal activities – even if they are never charged or convicted. Asset forfeitures have long been a benefit for cash strapped agencies throughout this country. Be it money, guns, homes, or vehicles, the bad guys’ ill-gotten gains have been put to good use by saving American lives and taking criminals off the streets. During the suspension of this portion of the seizure statutes, monies and property could not be kept until after conviction, but no more.

If a local agency seizes cash, they are entitled to keep 80% of it, while the Feds receive 20%. The property seized is usually sold and those proceeds are split in the same manner; however, vehicles and some contraband are another manner. I’m sure you’ve seen the sports cars and exotics marked as D.A.R.E. cars bearing the wording, “Courtesy of your local drug dealer.” This carries a great (and none too subtle) message, both to offenders and the kids in the valuable preventive programs like D.A.R.E.

Many vehicle seizures also end up being used by local, state and federal agency undercover officers. I served in several of these assignments and used a wide variety of “captured” vehicles, including a Cadillac limo reported to have once belonged to Elvis.

Actually, LE is only limited by their own imagination as how to utilize seizures.  “Flash rolls” are wads of cash frequently used in undercover operations when buying drugs or other contraband from criminals to establish the belief that the buyers (cops) have the financial capability to purchase (whatever). Once, on a joint FBI/local task force, I used a flash roll of a million dollars of FBI money in a briefcase. For security, the “flash” took place in a bank safety deposit box vault and all of the “customers” in the bank were FBI agents.

Unfortunately, my department never had this kind of money to use and possibly lose. In one operation, we seized a large quantity of prescription drugs from a major drug dealer and a crooked doctor. Seized in this load was a gallon jar of Quaaludes which were very popular at the time. Because cash was always tight, we got permission from the DEA to use the jar of Quaaludes in lieu of cash for future “flashes.”  Despite having to count every damn pill before and after every use, we sure took a lot of bad guys off the streets…many still in shock and with eyes as big as quarters after seeing that many Quaaludes at once!

Sergeant James Post is a 27 year veteran of police work and always appreciates your comments and suggestions. He can be reached at kopkars@arkansas.net.