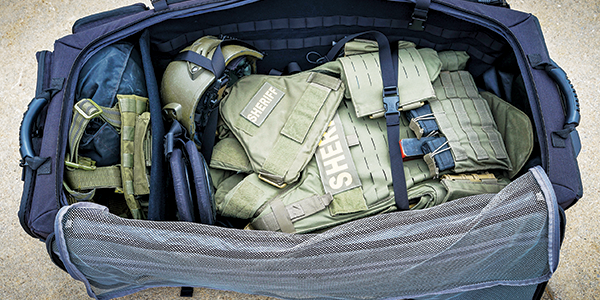 Not only can law enforcement be a dangerous job, it can also be a smelly one.

Clothes, body armor and tactical gear can smell of sweat, mildew, smoke, and other unpleasant odors.  Also, police vehicles can be “scent-laden” after a day’s shift or after transporting a drunk or a homeless person who hasn’t taken a shower in a while. Or, how about canine units which carry a dog in the backseat?

Using technology originally developed by NASA, including for the International Space Station, Odor Crusher, located in Wichita, KS, has developed a line of products which kill the organisms which cause odors – including bacteria. Its Ozone Activated Technology products are designed and marketed specifically for both duty and tactical equipment, as well as for another smelly type of equipment – sports gear.

Odor Crusher’s digital ozone generators produce ozone (O­­3) which is attracted to bacteria and other types of contaminants which cause odors. Ozone is the tri-atomic form of oxygen which is a molecule composed of three oxygen atoms. Ozone rapidly oxidizes organisms like bacteria when it comes into contact with them and converts them back into oxygen (O2), leaving gear scent-free. Odor Crusher products leave no aroma, chemical residue or harmful by-products.

Ozone is one of nature’s most powerful oxidizers and has been used as an organic cleaner for years. Nearly all bottled water is treated with ozone and many municipal water systems worldwide use ozone to treat drinking water. Odor Crusher has tested its products and has shown ozone to be effective in eliminating, or killing, common smells like sweat, smoke, food, and animal scents, including those from skunks.  Also, the company has used third-party laboratories to test it against bacteria and viruses like salmonella, norovirus and E. coli. Testing determined that the necessary ozone application techniques killed bacteria with over a 99% effective rate.

Ozone does have a slight odor, somewhat like chlorine, and is detectable at fairly low concentration levels.  As ozone is exposed to air, however, it quickly reverts to ordinary oxygen, so its odor dissipates quickly. When properly used, Odor Crusher products are designed to be well within federal safety standards which limit the amount of ozone which can be released into the air.

According to the company, its ozone generators operate for a maximum time of 30 minutes for one application. This will clean and disinfect gear in most situations. If smells are more ingrained into the fabrics or materials, more than one cycle may be needed. The manufacturer strongly recommends allowing the cleaning unit to remain undisturbed for the complete cycle before opening and then allowing fresh air to be exposed to the material before beginning another cycle. This will reduce some of the potential impacts on the materials.

What about any effects on materials? Odor Crusher says it has not seen significant impacts on the materials after applying ozone for normal periods of time. However, its testing has shown that, much like ordinary laundry cleaning, ozone does have some impact over time.

Cumulating after three years of development and testing with several agencies, Odor Crusher is now offering a complete line of waterless wash, ozone technology cleaning products, starting with the gym bag-like Odor Crusher Gear Bag and the Odor Crusher Urban Bugout Bag for individual gear. For larger amounts of equipment, there is the Odor Crusher Transit Gear Bag. The Odor Crusher Tactical OPS Tote is a heavy-duty 40 gallon container which can be used for permanent storage or for traveling. It is equipped with two wheels and oversized handles. Constructed from polypropylene and polyethylene, it is designed to tolerate extreme weather. The Odor Crusher Ozone Closet measures 68″ x 45″ x 20″ and has adjustable heavy-duty shelving for gear storage when items are not in use. All of these products can simply be plugged into the 12V outlet in your vehicle or the 120V outlet in your home. They are also airport/TSA compliant.

The Odor Crusher Ozone Go is a portable vehicle air cleaner which can handle any unwanted odors in a patrol car simply by plugging it into a vehicle’s 12V outlet. Like their other products, it has an LED ozone emittance light and eliminates odors in 30 minutes.

For more information on the entire line of Odor Crusher products, contact them at (877)575-3173; via E-mail at info@odorcrusher.com; or visit their Web site at www.odorcrusher.com