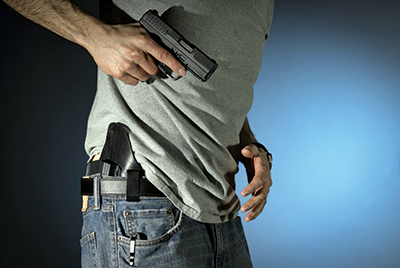 Like many things in life, carrying a handgun on your own time is a compromise.

When carrying concealed, your goal should be to strike a balance between having the ability to protect yourself and others, while keeping the lowest possible profile. Comfort also weighs into what sort of gun we might carry when dressed in plainclothes. A full-size service pistol supported by a Sam Browne belt isn’t a big deal to carry over a long shift, but most of us will find that same hardware to be a burden when dressed in soft clothes. To that end, most law enforcement officers favor a lighter, smaller gun when off duty.

Of course, off duty carry only represents part of the picture. Smaller handguns are commonly used by investigators, covert operators and administrative personnel, as well as for backup to the primary service weapon. I, for one, prefer to carry a 15 shot compact-size pistol whenever I can, but, when the mercury rises and the jackets come off, that becomes problematic. Another dimension I have to deal with is out of state travel. The Law Enforcement Officer’s Safety Act (LEOSA) allows me to carry a handgun anywhere in the U.S. However, a neighboring state restricts magazine capacity to ten rounds. Since going unarmed is ill-advised, I simply strap on a smaller handgun which meets the legal requirement.

But, is smaller always the best solution? I would submit that smaller guns beat a stern word or a big stick, but, taken to the extreme, a downsized blaster isn’t necessarily the best choice. Quite frankly, smaller guns are often difficult to shoot to a high standard, have diminished capacity and are often chambered for inferior cartridges. What is the bottom line?  Carry the biggest gun you can effectively conceal. A harsh reality is that factors such as light clothing or certain social settings often come into play and make this difficult, if not impossible.

Back when the Earth was flat and we all carried revolvers, small frame snubs were the hideout of choice. The overwhelming number of officers on my job carried one of the small Smith & Wesson® J-frames, although we also had a few like-size Colt® revolvers in the mix.  This was pretty much the status quo until autopistols became the service weapon of choice and the paradigm began to shift. Like many old-school types, I accepted the fact that a self-loader was the better tool as a service weapon, but I continued to utilize a snub whenever I had a need for a downsized handgun.

That’s all changed and we can now choose from a wide range of smaller pistols which are reliable and pack a service caliber punch. Just about all of the major manufacturers now offer a subcompact version of their service pistol which represents a very good choice for discreet carry. The grip angle and the placement of vital controls is the same as with the more familiar duty weapon which all goes a long way toward better performance.

The shorter sight radius and reduced grip length of subcompact pistols may set you back a step or two, but marksmanship potential is better than with a snub or pocket pistol.  Concealment qualities are pretty good, as well, and most of the subcompacts boast an ammunition capacity twice that of tools used in the past.

Another viable alternative is one of the single stack self-loaders, such as the GLOCK® 43, Smith & Wesson M&P® Shield™, and Walther PPS. These pistols give up a few rounds in capacity, but their flatter profiles make them even easier to hide. Best of all, these little mini-blasters are all chambered for legitimate service cartridges. Ten years ago, I would not have given you a plug nickel for a small pistol, but my thinking has evolved.

How Low Can You Go?

Jeff Cooper is widely recognized as the father of combat pistolcraft. About 30 years ago, I was reading an article penned by the good Colonel, where he stated, “Action in which a pistol is involved is unpredictable. There is no such thing as light duty or heavy duty in a pistol.”  Those words have stuck with me for some time. Consider that we carry a handgun to maintain control over our immediate environment and that we may have to quickly neutralize one or more adversaries with a predisposition toward violence. Suddenly, that handy little pocket pistol doesn’t seem up to the task.

I continue to make the case that any handgun we bet our life on needs to be chambered for a full power service cartridge, such as the 9mm, .40S&W or .45ACP.  With the right load, even the much unappreciated .38 Special can make the grade. I know many folks fancy .380ACP caliber pistols for personal defense, but I consider that cartridge to be a marginal performer. This is especially true when the .380ACP cartridge is fired from some of the ultracompact hideouts currently in vogue. Muzzle velocities are often in the 800 fps range with minimal bullet expansion and penetration. Similar, but slightly larger, 9mm pistols from the same manufacturers are an infinitely better choice.

For just about all of my adult life, I’ve had a love/hate relationship with .38 Special snub revolvers. I tend to shoot them fairly well at close range, but, as distance increases, performance begins to degrade in a very big way. Short sight radius and poor sights tend to play havoc with most everyone’s marksmanship potential, but snubs do, in fact, offer excellent size/power efficiency and rock solid reliability. Limited capacity is an issue also, but I still consider a snub revolver a far better choice than a pocket pistol chambered for an underpowered cartridge.

I’m hardly an anti-snub guy, but today there are better choices, particularly for cops who cut their teeth on an autopistol. Unless one is very committed to the craft, snub revolvers represent a very steep learning curve. For carry in the pocket or on the ankle, a snub is still the best choice, providing you are willing to put in the time to master it.

Holster selection is a very personal issue which requires the same attention as selecting the firearm itself. Your holster must be comfortable, durable, accessible, have good retention qualities, and help conceal the gun. That last quality is often overlooked by a great many people. Understand that there is a big difference in a plainclothes holster versus a true concealment holster. Many of the popular designs offered by the major manufacturers can be best categorized as plainclothes holsters. They work okay underneath a windbreaker with “police” stenciled on the back, but print badly under a suit jacket or light shirt. I would go as far to say that it’s far easier to truly hide a full-size gun in a proper concealment holster than a small gun in a poor design.

The ability to draw quickly is another primary concern, particularly when you consider that you will probably be playing “catch-up” to an adversary’s action. I’m not especially fond of concealment holsters which feature an FBI butt forward rake, as it makes my draw stroke very inefficient. This is especially true for female officers when working from concealment. I find my draw stroke from concealment to be measurably faster and more efficient with a straight drop or forward rake holster, but, by all means, find something which works best for you.

Carry spare ammunition for your hideout. Minimally, one should carry at least one reload, depending on the capacity of your handgun. There are a few outfits which offer magazine pouches which are contained in the pocket rather than the belt and these units can go a long way in keeping you under the radar.

A few months ago, I obtained a Concealed Carry Mag Pouch from ExtraCarry™. This innovative pouch is designed to harbor a magazine in the pocket and is secured to the pants pocket by an unassuming clip likely to be mistaken for a pocket knife. The pouch from ExtraCarry will keep that spare magazine handy for a quick reload while keeping it clear of coins, lint and other pocket detritus.

Getting the hardware side of the equation squared away is the easy part, but getting the software in order will require a bit of effort. Given a choice, most of us would prefer to practice with our service-size pistols, as they give us the most positive feedback and ballistic gratification. It has also been my observation that most departments devote a minimum amount of attention to training their officers with the gun they carry off duty. Very often, officers merely drop their preferred hideout into the duty holster and take a run on the agency qualification course. It would be a real stretch to call this training.

Bear in mind that your opponent picks the time, place and setting of the street encounter.  You will not be spotted any points because you have chosen to bring what may be an inferior gun to the show. Your adversary could care less if your gun has a diminished capacity, poor sights, a shorter sight radius, or fires an inferior cartridge. As a matter of fact, he probably prefers it that way.

The bottom line is that we have to rise to the occasion or perish. You simply can’t count on the possibility that an adversary is a terrible shot or will make a serious tactical blunder.  You just have to be at your best.

I’ve often been asked what special drills or courses of fire I utilize for training with smaller handguns. The truth is that I don’t have any special formula. Sure, we might spend a little more time working on the concealed carry draw stoke, but, other than that, it’s the same formula I use with duty-size handguns.  Initially, I like to establish that the smaller handguns from reputable manufacturers are capable of placing decisive hits on targets throughout their practical range. Once we have come to terms with that, we push the gas pedal a little harder to reinforce reactive shooting skills.

Issues such as rigid engagement, multiple threats, movement, reloading and shooting in low light should be addressed. At this stage, one begins to realize some of the limitations with the smaller guns. Not a deal-breaker, mind you, but a little dose of reality. In several instances, this has caused some officers to reconsider the type of handgun they utilize for concealed carry. It’s far better to find out our limitations on the sterile environment of the range than on the street.

It would do us all well to take a hard look at our training and equipment. Are we prepared to deal with the most likely threats we might face? More often than not, this will be some sort of violent street crime rather than a band of narcoterrorists. Practice in anticipation of the most likely scenario.

In summary, get yourself a small, concealable handgun you can still shoot to a high standard. As we have seen, too small is counterproductive.  If your agency doesn’t supply it, get yourself some proven, premium quality ammunition from a reputable manufacturer. Bullet technology has taken a quantum leap in recent years and it pays to go with the best. Don’t forget to select a good holster. Poor designs are slow to draw from or give you away. Did I mention practice? Right now, some bad guy is out there snapping some caps and, someday, you might meet. Like the Boy Scouts say, be prepared!