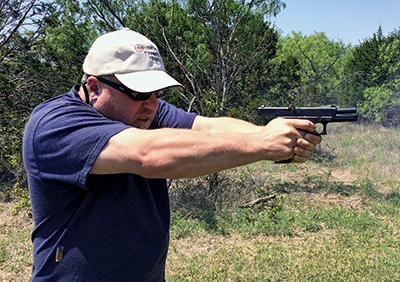 Due to the short duration and quick time frames of law enforcement gunfights, officers should train to fight quickly and effectively in condensed time frames.

Placing quick, threat stopping hits on target is the core of all gunfighting skills. In order to accomplish this goal, we must train to develop fundamental and practical skills in new officers while continuing to improve the skills of more veteran officers. Once these skills are developed, these officers must be challenged to identify their individual skill levels in order to balance combat speed and accuracy.

As important as this is, building combative speed and combative accuracy are two skills most firearms training programs fail to adequately address. Instead, most law enforcement firearms training focuses on teaching to the test – passing qualification. This results in training officers to meet minimum standards instead of preparing them to prevail in a gunfight.

It’s true that just about anyone can shoot fast since it doesn’t take a lot of skill.  A decent draw from the holster and a fast noise is all it takes to shoot fast. The problem is that shooting fast isn’t the same as making fight stopping hits in compressed time frames. Developing combative speed and accuracy requires practice and training. Quick, accurate, fight stopping hits placed into body parts which impede a suspect’s ability for continued aggression should be the goal.

Most shooters (and the majority of law enforcement training) spend time on the range shooting slowly and methodically while focusing on the fundamentals of marksmanship. Don’t get me wrong. This is quality training time and is an important step towards building skill because shooting well takes practice and dedication. In order to accomplish this goal, officers need to begin mastering the fundamentals.

However, law enforcement firearms training needs to go beyond the fundamentals of marksmanship in order to better prepare officers for prevailing in a gunfight. Learning to shoot well at combat speed takes practice and, despite what a lot of shooters have been told by their instructors, speed doesn’t come with mastering the fundamentals.This would be like saying that once a driver learns the basic rules of the road, they have the skills needed to compete in a NASCAR race. It doesn’t just happen once you learn the fundamentals. It takes practice.

On the range during firearms training, instructors should allow shooters to push themselves to failure in order to find their “speed limit.” Once they understand where their skills start to fall apart, shooters can slow down to a speed where they are consistently making fight stopping hits. They can train at this speed until their skills improve. Then, they can work to improve their skills on the way to finding their new “speed limit.” However, the concept of pushing skills to failure on the range is foreign to most officers and instructors.Too often, a missed shot on the range results in the shooter being subjected to ridicule and embarrassment. This is unfortunate since the best place to fail is in training – not on the street with lives on the line. Instructors must allow shooters to explore the limits of their abilities and the only way to do this is to allow them to push themselves to failure. Don’t misunderstand what I’m saying.  Marksmanship accountability on the street and in training is important, but it shouldn’t limit a shooter’s ability to push his (or her) skills and abilities to the next level.

A valuable tool for instructors and shooters is the addition of a shot timer.  Without a shot timer, a draw which feels quick may be slow due to wasted motion.  Conversely, a draw which feels slow, but is smooth with no wasted movement, may be quick.  Shot timers also measure the split time or time between shots. This can help provide a baseline to measure a shooter’s performance when working to find their “speed limit” and while balancing speed and accuracy.

A properly functioning shot timer does not lie. Everyone knows there are no stopwatches in a gunfight. But, who can argue that an officer who can shoot well quickly is better equipped to prevail in their gunfight compared to an officer who is slow and inaccurate?  Most shot timers are inexpensive and last for years. There are several shot timer apps available for your cell phone, too.  Some of these shot timer apps are free, so there’s no excuse not to have this tool available to help you train.

There are several other apps available to help build combative speed and accuracy.  Some of these use the videotape function of your phone or computer to help you see what is happening while shooting.  This allows the shooter to see how they manage recoil and whether or not their sights return back to the original point of aim.  Grip, stance and trigger management can all be observed using these programs. Even if these aren’t available on the range, we can use the basic video functions of our cell phones to accomplish the same thing.  What we feel while shooting may not be the whole story. If we can see what is happening while shooting, then we can make adjustments to improve our skills.

On the other hand, precision shooting means placing rounds on a very particular spot on target or putting one round on top of another repeatedly. This means pressing the trigger straight to the rear while attempting to obtain and maintain the “perfect” sight picture.Speed is secondary when precision shooting is required.

Sight picture and alignment are another part of the speed and accuracy equation.  Our shooters need to be aware of what an acceptable sight picture is based on the context of their gunfight. This can vary depending on the need for accuracy or precision as well as the distance involved. Shooters should be allowed the opportunity to experiment in order to determine an ideal sight picture. The ideal place for doing this is in a training environment where we can evaluate the type of sight picture that is necessary to deliver shots which meet the expected accuracy standard. This can reduce the problem of shooters attempting to maintain a “perfect” sight picture while working at combat speed. When it comes to combative speed and accuracy, perfection is the enemy of good enough.

Many firearms instructors have created confusion in the minds of shooters by failing to explain the accuracy standard in the drills used on the range. Instructors should provide context for accuracy standards by explaining what it means to “shoot well” during a particular drill or course of fire.  Are we conducting a One Hole Drill, or are we doing a drill which simulates a gunfight?  The accuracy standard of these drills is different and must be explained in the proper context to our students.

The use of steel targets is one of the best ways to train and practice shooting well quickly.  Steel targets help shooters balance speed and accuracy. In terms of adult learning, steel targets allow the development of shooting skills at the subconscious level of awareness.  The subconscious mind can learn to reflexively control the shooting process through the use of positive, instantaneous feedback.  The sound generated by the bullet hitting the target provides assurance of combative accuracy and confirms the shooter is applying marksmanship.  Shooters quickly improve and gain confidence in their ability to quickly and accurately engage targets. Initially, quality steel targets may seem expensive, but, with a little care and maintenance, they can last many years.

Accuracy – This is making hits on your intended target or target zone. Accuracy does not necessarily mean putting one round on top of another. Accuracy is hitting a general target zone, such as the upper thoracic area. Accuracy may mean using an acceptable (as opposed to a “perfect”) sight picture or directing shots by body index or positioning.

Precision – This is putting one round on top of another. Speed is secondary when precision shooting is required. This means pressing the trigger while attempting to obtain and maintain the “perfect” sight picture.