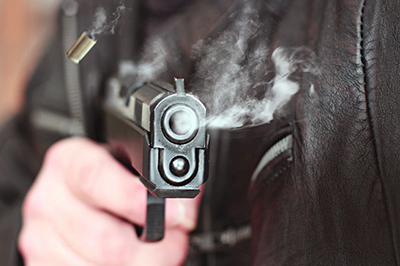 The closer you stand to suspects, the closer your gun should be to your body. Pointing your gun from a fully extended arm position at a suspect who is close enough to touch is to risk a disarming.

Shooting from the Hip?

Hip shooting was used by generations of gunfighters. From Wild West lawmen and outlaws to WWII soldiers, hip shooting provided a faster way to get rounds on target against an adversary who was within a few feet or out to several yards. This method accounted for the fact that, under stress, shooters often resorted to firing one-handed with a bent arm.

Shooting from the hip prohibited the shooter from obtaining a sight picture. However, by facing squarely to the threat and holding the gun parallel to the ground, the shooter was able to aim using body alignment. Although their technique differed slightly, many prolific shooters, such as Rex Applegate, William Fairbairn, Jelly Bryce, and Bill Jordan (just to name a few), became very proficient at shooting from the hip. However, hip shooting is not without its drawbacks.

With no consistent physical index of your gun to your body, it’s easy to miss your target, even at close range, without considerable practice. The fact that the gun remains parallel to the ground helps align it vertically. However, a slight flex in the wrist could send your round askew to one side of the assailant or the other.

Although shooting from the hip positions your gun farther away from your adversary than if you were to extend your arms and bring the gun to eye level, it may still be within his reach, as it extends well beyond the torso.

Whether you call it a retention position, a chest tuck, a pectoral index, or a close quarter hold, the best way to safeguard your gun and achieve combat effective accuracy in extremely tight quarters is by indexing your gun to your chest. Though you may not realize it, this is a natural component of the combat draw stroke.

A proper index involves your elbow rising to full extension, with the heel of your hand and your thumb pressed against your chest. Be sure to cant the gun slightly outward (clockwise for a right-handed shooter) to prevent the slide from snagging on your clothing which could induce a malfunction.

Indexing your gun to your body is beneficial in two ways. First, with the gun against your body, it’s far less accessible to your adversary. Even if he manages to grab it, you will have a considerable leverage advantage to help retain it. Second, with a consistent index, you can fire predictably placed rounds at close range without the use of your gun’s sights.

Because your gun is positioned well below eye level, you won’t be able to see the sights. The consistent index of your gun to your body, coupled with proper body alignment (hips, knees, shoulders square to the threat) is what allows you to aim your gun from the one-handed retention position.

Raising your elbow as high as possible will cause your muzzle to be oriented slightly downward (provided your wrist remains locked). Therefore, when firing from the one-handed retention position, your rounds will impact relatively low on the target.

With your gun indexed to your chest, your body essentially aims your gun in the vicinity of your adversary’s pelvis (assuming there’s not a considerable height disparity). The pelvis is a widely recognized secondary target area when shots to the upper chest are ineffective, as may be the case when the assailant is wearing body armor. Although a shot to the pelvis might not immediately incapacitate your adversary, one or more shots to this area are likely to prevent it from supporting his weight, in essence, rendering him immobile.

Of course, being shot anywhere (particularly, multiple times at close range) can lead to a “psychological stoppage,” as the assailant’s mind-set is transformed from attack mode to self-preservation mode. When you consider that a single punch or an eye poke can change the tide of a fight, it’s foolish to dismiss the notion of shooting an assailant in the pelvis simply because it’s not likely to shut him off like a light switch the way a shot to the medulla oblongata (part of the brain stem which controls autonomic functions such as breathing, heart rate and blood pressure) would. At arm’s length, the pelvis is generally easier and less risky to target than the head or chest.

When your gun hand is indexed, your off hand should be at chest level, prepared to either strike or fend against a close quarter threat or “fill the void” in the grip left by your shooting hand when a two-handed shooting grip is desired. Just don’t become so conditioned to achieving a two-handed grip that you forget to use your off hand to greater benefit against a close quarter threat. This may be to shield your head from incoming strikes, shove the assailant away, or secure and control his arm which is closest to your gun.

Some experts caution against using their off hand to fend or fight for fear of shooting that hand. Although this is a legitimate concern against an aggressive assailant who is mere inches away, you may well have to use your off hand to keep from being run over or disarmed.

The threat of shooting your own hand is mitigated by certain factors. First, by locking your wrist and raising your elbow as high as possible, your muzzle will be oriented slightly downward. Second, you should ensure that your off hand is either in the bad guy’s face or protecting yours. Third, by squaring yourself to the threat, it’s more likely your off hand/arm will be clear of the muzzle when shooting from retention.

Be conscious of the placement of your off hand in relation to the muzzle and keep your finger indexed safely along the frame until you’ve made a conscious decision to fire.

The two-handed retention position affords you the ability to fire from retention or anywhere along the path of arm extension. Because the gun is more or less parallel to the ground, this position enables you to shoot at a longer range. You can hit a target from several feet (even a few yards) away from this position, whereas rounds fired from more than a couple of feet away from the one-handed retention position would impact the ground between you and your adversary.

To envision this technique, think of drawing your arms in from an arms extended, sighted fire position. Bring your elbows tight to your body and make sure your forearms are in contact with your chest. This will provide stability for the gun and a consistent aiming point. Again, when you are square to the threat and you incorporate a physical reference like the heel of your gun hand to your chest or both forearms against your chest, your body essentially aims your gun for you.

The two-handed retention position is viable from a gun retention standpoint because it places the gun close to your body where you’re more powerful. The closer the gun is to your body, the more leverage you have to retain it. And, because you have both hands on the gun, your hands will completely encircle the grip, ensuring maximum control of the gun.

Shooting from retention isn’t solely an upper body endeavor. To stay on balance, you need to assume an athletic stance, with your feet about shoulder width apart and your knees slightly flexed. Although your shoulders and hips face squarely to the threat, your gun side leg should be well behind your other leg. If both feet are along the same horizontal plane, the slightest push from the front will have you backpeddling to regain your balance. Your weight should be distributed primarily on the balls of your feet which helps facilitate rapid movement in any direction.

Your aggressive demeanor should manifest itself in the form of a slight forward upper body lean. This posture is conducive to forging ahead, claiming the ground on which your adversary stands. Lots of firearms instructors espouse that your shooting stance is your fighting stance. This is often followed by said instructor demonstrating a shooting stance in which their feet are precariously close together and their upper body completely upright. Clearly, these instructors haven’t been in many fights.

Cowboy Action Shooting, ixnay on hip shooting. It’s fast, but it’s also inaccurate, unless you devote an inordinate amount of training time. Even then, it’s not beneficial in a gunfight in extremely close quarters where your adversary will likely reach for your gun to disarm you or, at least, redirect the muzzle.

Shooting from retention, on the other hand, provides you maximum control over your gun and facilitates the consistent aiming of your gun. With an aggressive stance, the one-handed and two-handed retention positions will give you a distinct advantage during a point blank deadly force encounter.

Editor’s Note: This article has been excerpted from a well written and authoritative book by Richard Nance, entitled gunFIGHT! An integrated Approach to Shooting and Fighting in Close Quarters. Copies of this book can be obtained from Looseleaf Law Publications, Inc., 43-08 162nd St., Flushing, NY 11358; phone (800)647-5547; or by visiting their Web site at www.LooseleafLaw.com. The price of the book is $23.95 (plus shipping and handling).