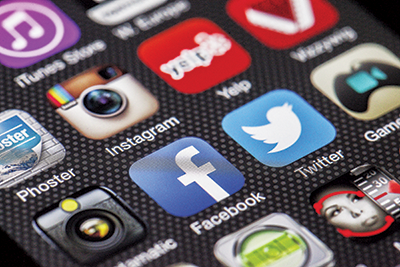 Smartphones and social media expand our universe. We can connect with others or collect information easier and faster than ever.

Social media dominates the lives of many people, especially school-aged youth. Being glued to those screens seems pandemic. Cynthia Hetherington of the Hetherington Group and Bruce Canal, CPP, Orange County, FL, Public Schools, recently addressed the use of social media in their presentation for ASIS International’s annual meeting.

“Anything that you put on the Internet, everybody can find,” said Canal. Those communications are available not only between sender and recipient, but to many – including employers; potential employers; law enforcement; and other, perhaps, unintended readers!

Canal explained that the growth from Internet to social media has been fast-paced and is still evolving. When the Internet began in 1969 with four connected computers, it evolved into ARPANET in the early 1970s, then MILNET. By 1984, NSFNET was created with more networks following and, now, all are connected. SixDegrees.com, which lasted from 1997 to 2001, became the first social mediaservice. Facebook debuted in February 2004 and Twitter in March 2006, but these and other social media now have an impact every day among millions, even billions, of users.

The only “challenge” of sorts which social media suffers might be related to the age of its users. Generation X (born 1965-1979), Millennials (born 1980-1999) and Generation Z (the first 21st Century generation born 2000 to the present) seem to embrace social media, but Baby Boomers (retiring at the rate of 10,000 per day) may not have quite the same affinity for social media; although, that may be changing now also.

A Staggering Amount of Information

The volume of social media content is “massive,” said Canal. There are 500 million daily tweets, 70 million photos and videos posted daily and about one billion social media users. “Twitter is the only source that is truly a public source,” Canal said.  All tweets are a matter of public record – meaning no subpoena is needed for those tweets if they are to be used in prosecution or litigation.Other social media sources have different formats and policies, he added.

Canal explained that the digital age is the hallmark of modern living now.  He pointed out that the Orange County, FL, Public Schools are digitizing everything in the curriculum for its 207,000 students. By the end of 2018, all students will have electronic devices and books will be minimized. In fact, libraries will eventually become digitized, he said.

And, it’s not just schoolwork which is being done electronically. The average number of instant messages per day for middle and high school students is 75 and the average number of social media site posts is 30. “It’s not a tool; it’s a lifestyle!” Canal commented. Generation X users average five preferred social media sites and Millennials average eight. That translates to hours per day using social media or, at least, monitoring it, such as checking Facebook posts.

For parents, teachers, law enforcement, and others, it’s simply not practical to consistently or effectively monitor social media manually because posts occur at all hours of the day; some users post more than others; some multitask a variety of sites; and there is no stereotypical criminal social media user. Canal pointed out that the Chicago Police Department and other agencies have, or are developing, dedicated units for social media criminal intelligence.

Said Canal, “Social media posts are better than hearsay. They’re tangible and real. There’s no chance to take it back,” and the posts teach much about a person– so few, if any, informants or tip lines are needed if social media is used and explored.

With social media also involved in some criminal activity, too, Canal pointed out that a recent ten year study by the US Secret Service found that, of students perpetrating a school crime, 87 percent stated their intent on social media prior to committing the act.

Recognizing the value of monitoring social media is only the first step in social media security, data security and social networks, he said.

For intelligence monitoring, scans can be done using specific words, phrases, sentences, or vocabulary pertaining to corporate proprietary information or intellectual property, imminent threats, suicide, terrorism, cyberbullying, slander, or compliance viols. Said Canal, monitoring is beneficial with real-time alerts sent to a smartphone, laptop or any device. A dashboard is created for analytics and posterity. The Web site, www.smcapture.com, can be beneficial.

Panelist Cynthia Hetherington explained that technological tools make the process of monitoring easy and straightforward. Finding profiles can begin with Google and name searches, social media platforms, usernames, E-mail addresses on business cards, and other identifiers. She termed the cyberworld as “an entirely different realm” from other security measures. “You can’t protect if you’re ignorant.  We have to get into this.”  She added, “There is no better tool handed to us on a platter for free than social media. It is borderless.”

Using social media as an intelligence tool can reveal what a person is doing or saying, interests, hobbies, job seeking, dating/meetup activity, and other profiles.  Knowing more about the person being investigated makes it easier to track a profile, she said.  Sites such as www.namechk.com, www.peekyou.com, www.pipl.com and www.cybertoolbelt.com allow looking for a particular name or nickname on various social media sites. “Never use one resource” for data searches, search engines or social media searches, she said, because no one tool does it all. Duplicates and repetition may result, but those extra bits of information prove worthwhile and reinforcing.  “There are no fully private accounts,” she said, adding that searches require “knowledge of technology, subterfuge and guile!”

Based in Germany, www.Yasni.com has extended international coverage and can drill down by topic or interest, and www.Yatedo.com groups information by images, Web pages, documents, and social connections. They are all “deep Web” and all free, she said. For legal advice about social media, Hetherington cited www.socialmedialawandorder.com.

Gather what is liked, friends, locations, associations, opinions, photos, nicknames and other information, she said, adding, “Capture what is in front of you.”

As to personal security, she encouraged vigilance and being aware. Don’t give out personal information on social media unless it is necessary. Avoid formula quizzes on social media. Never assume something is safe. Watch out for the obvious, such as a “surfer” looking over your shoulder to glean a password or passcode. Don’t install social media apps on your personal cell phone; use a different device/phone. Lock down all your permissions on social media. She stated, “Social media will never keep you protected.” Remember that messages posted can be forwarded, reposted and shared.

StephenieSlahor, Ph.D., J.D., is a writer in the fields of law enforcement and security. She can be reached at drss12@msn.com.

The National White Collar Crime Center (NW3C) recently released an online training course on virtual currency.  The 30 minute course covers basic information and concepts which serve as an introduction to virtual currencies and their relationship to other types of currency. It covers various types of virtual currency, including the difference between decentralized and centralized currencies, with a strong focus on Bitcoin – what it is, how it is stored and Bitcoin specific investigative tips and techniques. Individuals must have an NW3C online learning account and be employed by a law enforcement organization to access the no cost training. To access the virtual currency training, visit http://tinyurl.com/mt4gesu.