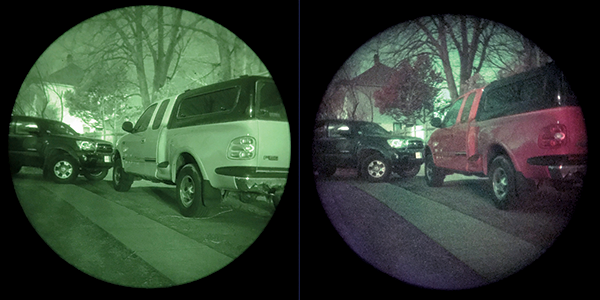 Night vision devices, like Night Vision Goggles (NVGs), have become an important tool for law enforcement, allowing SWAT teams and other police officers to “see” in the dark of night for such tasks as covert surveillance of illegal activity, apprehension of dangerous suspects, crime response, and search and rescue.  Night vision devices take in small amounts of visible light (for example, starlight or moonlight) to capture an image, then magnify its intensity and project it on a display. Actually, night vision, or image intensification as it is often called, has been around since the 1930s and primitive versions were first used in WWII.

The downside of traditional night vision devices is that the viewer sees only a “green glow” monochromatic image. This lack of color often means important information is lost. For example, an officer is not able to match a description of what a person is wearing or the color of vehicles involved in an incident. You cannot tell if a person is bleeding or if his (or her) clothing is just wet with water or covered in dirt. Also, without color, it is much harder to use NVGs to traverse rugged terrain, for example, to determine where the pavement ends and becomes gravel or mud. Green monochromatic night vision can result in visual distortion and user fatigue and can slow tactical decisions in critical and fast moving situations.  The more information an officer can get, the better he (or she) will be at performing his (or her) mission.

Chromatra, LLC, based in Beverly, Massachusetts, is now offering a solution to this lack of color with its new ColorTAC™ CVA-14 unit. It uses Chromatra’s unique Gemini technology which enables the production of color images from any current monochromatic PVS-14 NVG device, yielding impressive low light imaging performance.

ColorTAC can add color image capability to any existing PVS-14 green or white phosphor night vision device, the most common NVG device now used by law enforcement agencies. The weight of a PVS-14 with a ColorTAC CVA-14 unit attached is less than the weight of a PVS-15 binocular unit – which is 23 ounces, including battery. Incidentally, devices such as the AN/PSQ-20 which fuse the output of a thermal (heat) viewer with night vision might be described as providing a “color image,” but they are just overlaying yellow or red thermal details over a standard green night vision image, not the colors of objects. ColorTAC is currently the only system which gives you a true color image.

The ColorTAC unit operates in extreme environments; is easily deployable; is lightweight; and it exceeds market battery life requirements. The unit folds up quickly and compactly for storage or transportation and takes just seconds to attach to any of the over one million PVS-14 night vision devices to provide users with a color image at night.