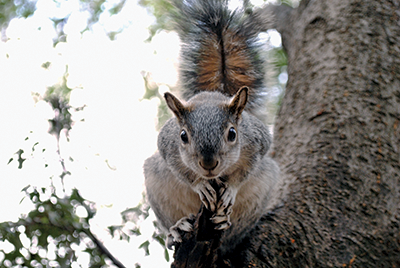 “Ratted out” by a squirrel?… In Meridian, Idaho, a homeowner returned to his residence and noticed evidence of a break-in. He called the police and, when investigating officers arrived, they immediately spotted the homeowner’s pet squirrel (who had the run of the house) and saw that the animal was in an agitated state. Investigators found footprints in the snow outside the house and tracked down the alleged burglar. During questioning, the officer observed numerous scratches on the suspect’s arm and the explanation offered was enough to seal his fate. He told the officer, “Damn squirrel kept attacking me and wouldn’t stop until I left.” (How do you show your face in the hood ever again after running from a squirrel?)

It looks like he picked the wrong week to quit amphetamines…In Pennsylvania, authorities say a man mistakenly sent a text message to a prosecutor indicating that he wanted to trade marijuana for heroin. An assistant district attorney in Luzerne County received a text using drug lingo which was an “obvious text for a drug deal.” She later received a photo of a plastic bag containing a green substance on a scale. Authorities said a 29-year-old Plymouth man was arrested at the supposed drug swap outside a shopping center in Edwardsville. He’s now being sought after failing to appear for a hearing. (Don’t worry, I’m sure he’ll send another text to police in a day or two letting them know where to pick him up.)

“Heinz sight is 20/20”… In Sandusky, Ohio, police say a couple in Ohio staged a murder scene in a bathtub in which they poured ketchup over her and he then sent pictures to friends saying he did it. Officers showed up after getting calls from three people who they say were “hysterical.” But, they quickly discovered that the scene in the couple’s bathtub had been staged and ended up charging the couple with inducing panic. Both have since pleaded not guilty. (This is what happens when your pranks “catch up” with you.)

He was probably too distracted to notice the officers when they arrived… A man who threatened a clerk with a pair of scissors tried to rob the local Lowe’s store in Kissimmee, Florida. Other employees and shoppers came to the clerk’s rescue and the failed robber fled the scene of the crime, jumping over a fence and onto the grounds of a nearby resort. There, he carjacked a golf cart from a security guard. But, his flight to freedom was short-lived when police quickly arrived. They had no problem spotting the fleeing felon because he was the only one there wearing clothes. It turns out that he had jumped over a fence and onto the grounds of the Cypress Cove Nudist Resort. (I wonder how the arresting officers managed to stay “focused” on their task?)

“Do you think these handcuffs make my butt look big?”… In Sheboygan, Wisconsin, an 18-year-old woman and her 27-year-old boyfriend set up a meeting with a man “to meet and hang out,” but their actual intent was to rob him. They managed to pull the crime off flawlessly, but the police tracked them down through the woman’s Facebook posts. When the officers arrived at her parent’s home to place her under arrest, she asked her father to take pictures of her in handcuffs so she could post them on Facebook. (Back in the day, we used to call that a “Kodak moment.”)

Maybe they were trying to “clean” up their act!… In New Jersey, police say the twin brothers who stole 180 bars of soap from a supermarket weren’t able to make a clean getaway. Absecon police say they dumped 30 six-packs of Dove soap into a large bag and bolted for an exit with employees in pursuit. Police say the twins were knocked down when they ran into a trash can, but got back onto their feet – only to fall again after running into a shopping cart. As the twins turned a corner, they came face-to-face with a police officer who was investigating an accident in the parking lot. (They needed to Dial® it up a notch and should’ve made sure the Coast® was clear. Now, they’re all washed up.)

Oops! He forgot to buy the Internet!… A man recently bought hundreds of copies of a weekly upstate New York newspaper in an unsuccessful effort to keep people from reading about his DUI arrest. Police also charged him with refusing to be fingerprinted or photographed. The 12,000 circulation Times of Wayne County says it obtained a mugshot from the county jail. It then printed it and a story on New Year’s Eve and published them online. The owner of the newspaper said the man bought nearly 1,000 newsstand copies at $1.25 each. (Well played! No one will hear about this now!)