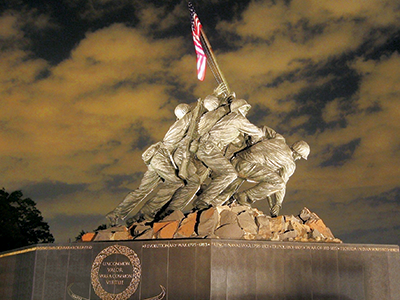 I’m sure you’ve seen the news stories over the last five to ten years about some soldier or airman who refused to be deployed for combat – this in an all-volunteer military. So, you join the military, train to use weapons, train for combat and, then, when your country tells you to go use your skills, you say you’re morally opposed.

I missed Vietnam by a couple of years. I worked with guys who were there. You might be one. They despised the “conscientious objectors” who fled for Canada and points beyond to avoid the draft in those days. They saw some of their buddies get butchered in war – some themselves came back with one leg, or none – and then had to face derision from the very cowards who wouldn’t go and fight when they were called to do so. There’s no draft now, so if you don’t want to fight, why join up?

My stepdaughter knows a history teacher at her school who refuses to teach certain segments of world history because they disturb her so much. Why, oh why, become a history teacher then? Why would any of us in law enforcement endure the academy and everything else and then be opposed to arresting people for laws we don’t believe in?

Recently, here in the state of Florida, a prominent state prosecutor refused to pursue the death penalty in the case of an Orlando police officer who was murdered. I won’t go into the case itself, because – as horrible as it is for any of us to hear of a murdered police officer – the case itself is irrelevant to the point I want to make. The point, folks, is about a concept which “progressives” are trying to destroy: duty. I could go into a whole litany of reasons why I think they want to destroy duty (and appropriateness and dignity and other old-world ideas which made our world sane and worth growing up in). Perhaps, it is because duty is not always easy. Duty is something you do – and have agreed to do – regardless of what your personal feelings are. We do it all of the time. Judges and lawyers make decisions every day – opinions and arguments about the laws which affect all of us – contrary to their personal beliefs, religions and convictions. Why? It’s their JOB.

If you take an oath, as Chief State Attorney Aramis Ayala did, to uphold the law, then you have a duty to do just that. If you decide not to uphold the law because of personal beliefs, then you went back on your promise; you lied to the public. Had Aramis Ayala presented the aggravating and mitigating factors in this case to the public in a convincing and lawyerly manner, showing that the mitigating factors outweighed the aggravating, and deferred to pursue a life sentence instead of death, then fine, I have no argument. But, instead, she said she would “never” pursue a death penalty on any case and, for the Chief State Attorney of a large judicial district, that is reprehensible. I spent 27 years of my life making sure I fulfilled a duty to the public, so this kind of rubs me the wrong way.

The “never” part of her many quotes (you can find them all over Google) about this topic poked more than just this old retired homicide guy. Pam Bondi, the State Attorney General for Florida, was as blunt and direct as she could be, calling Ayala’s announcement a “blatant neglect of duty.” (OMG, there’s that “D” word again! Where’s my safe space?!)

University of Florida law professor and former prosecutor George R. Dekle, Sr. was kinder, but left no ambiguity about how he saw Ayala’s state of mind. “I think any time anybody facing any kind of charging decision says ‘never,’ then they are not thinking too clearly.”

Ah, George, I disagree. You see, the cynic in me says that Aramis Ayala was thinking very clearly. She is not a stupid person. She went to law school and had enough creds to run for public office. She became the first black elected prosecutor in the state of Florida, a statistic which could not have been completely lost on her and her supporters. Who knows what has been going on in her private life or what plans she was concocting for the future, but she knew full well that doing anything controversial will bring… (wait for it)…publicity!

How many times have we seen it? Everyone involved in the OJ Simpson case – prosecutors, defense attorneys, witnesses, the judge – became famous. The amazing part of that is they would have been famous regardless of the outcome because the case itself, the defendant and all of the sensationalism which followed predetermined the outcome: Guilty or not guilty, everyone will have books, lectures and a place in the criminal justice hall of fame.

You think Aramis Ayala didn’t think of this? Let’s see…I refuse to pursue the death penalty because of personal belief, not evidence, and what happens? Lights, camera, action! That’s what happens. Off I go into private practice, with a huge leg up on the competition: Everyone knows my name.

After Pam Bondi slammed her, Florida Governor Rick Scott asked Ayala to recuse herself from the case and she refused to do so. Scott then issued an executive order, removing Ayala from the case. Of course, he was showered with criticism by the ACLU and the NAACP.

“My God, this is a dangerous precedent,” moaned Howard Simon, the ACLU’s Executive Director. “Whenever the governor doesn’t like the exercise of prosecutorial decision by an elected prosecutor, he’s going to step in and appoint somebody else?”

Actually, Howard, no elected official in Florida, to my recollection, has so blatantly refused to follow the rule of law.

Adora Obi Nweze, the President of the Florida Conference of the NAACP, said that “a powerful symbol of racial injustice has now been discarded in Orange County.” Jumping to conclusions just a bit, aren’t we, Adora? Oh, and for the record, the victim in this case, who was shot four times, is an African-American female. So, are you for or against prosecuting death cases in which African-American females are the innocent dead victims?

I’ll tell you what’s a dangerous, horrific and society threatening precedent: forgetting your sense of duty in trade for your own greed, amateurishly cloaked in a righteous cause.

Make a choice and stand by it. If you’re a vegan, don’t go to work at a steakhouse and then start complaining.
Lights, camera, action! Aramis Ayala, we see right through you.