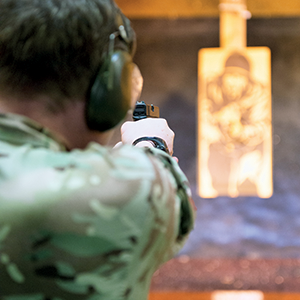 There are a number of catchphrases which firearms instructors have been repeating over and over for what seems like an eternity.

Regardless of the instructor’s home base, these phrases are generally accepted and repeated throughout the country without a great deal of critical thought. Instead of offering help to our students, the use of these phrases oftentimes contributes to a lack of improvement. From this point forward, I suggest we stop using the following phrases and truly focus on helping our shooters prevail in their gunfights.

When I first became a firearms instructor, I kept hearing instructors tell students,

“You’re anticipating recoil.” At the time, this made some sense to me because I saw so many shooters convulsively tighten their grip on their handguns immediately prior to firing. I realized this was a common problem for shooters, even those who were very proficient. These skilled shooters would occasionally throw a shot and I would hear an instructor correct them by saying, “You’re anticipating recoil.” Being the new guy on the range, when I saw a shooter convulsively tighten his (or her) grip, modeling the behavior of my mentors, I started telling them the same thing.

Over time, instead of observing the shooter from afar or just interpreting his target, I started to ask questions and pay more detailed attention to what the shooter was actually doing. I began asking shooters why they thought they were missing; what they were seeing; and what thoughts were going through their mind at the time the shot broke. It confirmed my belief that the problem was actually an attempt to capture the perfect sight picture. Most of these shooters told me their sights where perfectly aligned and they wanted the gun to shoot…NOW! This made sense to me. What I was observing was that a lot of these shooters were accelerating their trigger press while simultaneously tightening their grip. It seemed most shooters were attempting to time the shot to coincide with what they perceived to be the perfect sight picture.

The surprise for me was that the problem didn’t actually have anything to do with recoil. They were trying to capture the perfect sight picture and instructors were telling them they had a recoil problem. I started to examine the words we were using and how they could be interpreted by our shooters. Anticipating means to expect, predict or foresee something which may occur in the future. However, to a lot of our shooters, it also implies a certain amount of fear, anxiety or apprehension. Basically, we were telling our shooters – even our skilled shooters – that they were afraid of their handguns because of recoil. The phrase, “You’re anticipating recoil,” needs to be retired so firearms instructors will actually diagnose a shooter’s marksmanship problems.

Another range mantra I’ve heard nonstop since I entered law enforcement is the refrain, “Front sight, front sight, front sight.” I’ve often witnessed, and participated in, standing over the shoulder of a shooter and continuously offering this bit of sage wisdom. This phrase is usually uttered by a firearms instructor who believes that focusing on the front sight will remedy all other marksmanship errors and often accompanies the diagnosis of, “You’re anticipating recoil.” The problem is this is frequently not the solution to an undiagnosed problem.

Most of the time, it’s pretty simple to identify sight picture or sight alignment issues. An instructor trick I learned from Peter Burlingame, Self Defense Initiative, Inc. in the US Virgin Islands, is to have the shooter unload his handgun, remove the slide from his handgun and holster the lower frame assembly. Then, have the shooter remove the recoil guide rod/spring assembly and barrel, and set them aside. The shooter should be left with only the slide. The instructor stands in front of the student and the student obtains a sight picture on one of the instructor’s eyes. This allows the instructor to see what the student is seeing through their sights. After having done this with many instructors and students, I am certain that looking through the rear sight at the front sight is not the problem for most shooters.

Another reason this phrase needs to be retired to the trash heap of training axioms is because shooters and instructors focus too much time and attention trying to improve the difficult skill of moving the trigger smoothly instead of fixing the one thing which most easily solves the problem: improving the shooting platform. The single best way to minimize the amount of muzzle movement caused by jerking the trigger is to stabilize the shooting platform. Doing so decreases muzzle movement during trigger movement and helps bring the muzzle back on target quickly and effectively. Once shooters become better at stabilizing their shooting platform, then we can work on a smoother trigger press.

“Train like you fight” most often means we should train using the same uniforms and gear we use on the street. I can’t argue with that logic. We’ve all seen the detectives and command staff on the range using duty gear which needed to be dusted off and resized prior to training. We do need to train with our duty gear in order to be ready to fight under those conditions. But, we don’t need to work on skill development wearing all that gear. Being weighed down and burdened by a lot of uncomfortable gear can actually hamper the learning process. Instead of learning, we’re counting down the seconds until we can gear down and go home. No one wants to continuously train while uncomfortable.

What happens if our next fight takes place while we’re off duty and in plainclothes? Not counting court, meetings and other ancillary duties, most of us spend

40-48 hours per week working. Even though it is more likely for us to be involved in a fight at work, we still have 120-128 hours left in the week for our fight to occur. Since you don’t know what your fight is going to look like or where the fight will take place, how do you “train like you fight”? What if your fight takes place at your home in the middle of the night? Does this mean we should be training on the range wearing boxer shorts? “Train like you fight” needs to be retired because it leads you to believe that you can accurately pick when, where and how your next fight is going to occur.

There are probably dozens of other range phrases which could be added to this list and each of us probably has our own favorites. So, instead of recycling the same tired worn-out expressions, let’s cast a critical eye on what we’re doing and saying during training.