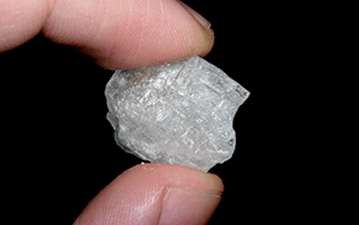 Morgan Stanley has nothing on this guy’s investment strategy… After winning a scratch off lottery prize last year of $3 million in Waycross, Georgia, a 45-year-old man must surely have thought the “odds” were with him all the way – because he soon flipped the money into a Georgia methamphetamine gang. Unfortunately, the “bet” went sour and now he faces decades in prison after he pleaded guilty to drug trafficking and firearms violation. He was busted after he and his associates were found with $1 million worth of meth and a load of guns.  (Well, at least he didn’t do something really stupid like donating his winnings to a political action committee.)

Bet you can’t eat just one… A woman in Washington, DC, faced charges of theft after reportedly stealing French fries from a police officer’s plate at a local restaurant. Two women, whom the officer believed to be intoxicated, approached his table to begin a conversation when one began to eat fries from his plate. “I then politely asked her to not do that again because I paid for that food and she was stealing from me and she could be arrested for theft of my food,” the officer wrote in a police report. The woman responded by saying, “Well, then, you might as well take me to jail,” before taking a third fry. She was then arrested for second-degree theft with the stolen property listed as “French Fried Potato…quantity 3.” (I want to arrest my wife every time she does that!)

Urine a lot of trouble… Pennsylvania police say a drug suspect was all wet when he urinated in his pants in the hope that it would dissolve the heroin and cocaine in his pocket. The 42-year-old man sold heroin during an undercover sting in Scranton. Police say that, when they tried to arrest him afterward, he struggled and had to be subdued. Police say he then began urinating in his pants in an attempt to dissolve the drugs. Police say he was unsuccessful and they found five small bags of heroin, four small bags of cocaine and $3,000 in cash. (Police: “You’re apeein’!” Suspect: “No, sir, I’m American.”)

His “Mensa” yearbook photo wasn’t available?… In Stuart, Florida, the local police department tweeted a photo of a man described as their “Wanted of the Week.” It was apparently a very good photo because the wanted man adopted it and started using it as his Facebook profile picture. This proved to be a bad idea. The police used the photo to identify the man as a suspect in a disturbance soon afterwards and used the information to arrest him on outstanding warrants. Adding a touch of  insult to injury, a bag of marijuana fell from his pants as he was being taken into custody. (“The Stuart, Florida, Police Force liked your picture.”)

Every now and then, a “Happy Meal®” fails to live up to its name… A man’s search for love in Casper, Wyoming, pointed to an online ad. He contacted the “advertiser” and arranged to meet a hooker for sex. The man negotiated with the woman and worked out a deal to pay for his romantic encounter with a Quarter Pounder® with cheese and a medium order of fries. Unfortunately, his “romantic” encounter had actually been arranged with an undercover police officer and not a real hooker. He was arrested when he showed up for his tryst, holding a McDonald’s® bag in his clenched fist. (You don’t deserve a break today!)

Smear campaign gets out of hand… A 32-year-old woman burst into what she believed was a “Donald Trump for President” rally in Amherst Junction, Wisconsin, and shouted at the people about her hatred for Trump. The group asked her to leave, but after a man in the parking lot spotted her spreading peanut butter on vehicles, they called police. The event wasn’t a Trump rally – it was a meeting of the Tomorrow River Conservation Club. The complaint said she admitted to drinking beer that night and blew a .218% alcohol level on a breathalyzer. Police say she smeared peanut butter on 30 cars using a “family-size jar of low sodium, creamy, Natural Jif®.” (Because low sodium is better for your car…)

How cheesy!… Near Youngstown, Ohio, police have accused a woman of selling sex for $60 and some nachos. Beaver Township Police arrested the 36-yearold woman during an undercover operation. An officer texted the woman after seeing an online advertisement for sex services. The department says she first wanted $50 and some nachos and later raised the price to $60. A spokesman reports that, when the undercover officer later met the woman in the parking lot of a Mexican restaurant, she asked if he had the extra money and her nachos. The woman was charged with solicitation. (It makes me wonder what she’d do for a Klondike® bar.)