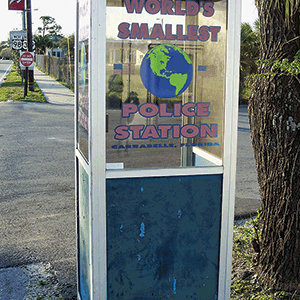 We’re a quarter of the way through 2017 and my home state of Florida is keeping its reputation for bizarre criminal justice news well in the forefront. You just can’t make this stuff up.

However, you’ve undoubtedly noticed the image of the “Smallest Police Station in the World” (it’s a phone booth) located in the quiet fishing village of Carrabelle, FL, on US 98 at the corner of CR67. Do you want to learn more? Log on to their Web site at  http://carrabelle.org/things-to-do/worlds-smallest-policestation/. And, if you’re ever in the area, feel free to stop by – the good folks in Carrabelle are happy to have you take a souvenir picture for your friends and family!

We’re not done. The dog’s name is Diesel. So, apparently, the dog jumped up on the nightstand where the gun was sitting (where we all keep our 9mms, right?) and somehow managed to create enough force on the trigger to discharge a round into the woman’s leg. Diesel shot Summer Miracle – accidentally. How, I wonder, do you do paw swabs for gunshot residue?

And, what are the charges? Everyone from the Palm Beach County State Attorney’s Office is probably still out drinking after getting briefed on this so, no, nothing yet. Diesel, who knows nothing of the Fifth Amendment, wisely remained silent. Whether alcohol was involved is yet to be determined. Personally, I think they should send Diesel’s bowl to the lab just to be sure.

Palm Beach is an interesting place. Despite its placid, relaxing sounding name, it’s a haven for the bizarre and unexplainable. In February of last year, a 23-year-old guy threw a live three foot alligator into a Wendy’s® restaurant via the drive-thru window. His mother was appalled at all of the attention the case got. “It was just a prank. He’s a prankster. He does stuff like this because he thinks it’s funny.” Gosh, Mom, thanks for setting us all straight. I’m going to grab a Frosty®, um…to go.

Alligators are pretty calm – if you know how to handle them, or if you toss them a piece of steak with some fentanyl in it. They are also abundant in the southeast counties and, in Palm Beach County, the Everglades is not a long ride at all. So, you can drive west, grab a gator and head to your favorite fast-food joint in pretty short order.

In Lake City, which is way up in north Florida, an auto thief running from police climbed a tree to get away. Sadly, he fell out of the tree, sustaining multiple fractures in the process. Now, before you go making Flori-DUH jokes, I must tell you that this brilliant lad is from Tennessee. He’s not the first criminal to fall out of a tree, for sure. I remember a homicide case in which we served a search warrant on a narcotics house at about 5:00 a.m. The house had this metal cage around the front door, so we got a tow truck to hook it and pull it off. The truck’s tires spun for a few moments and then, pow! the metal grate came off and the truck lurched forward, hitting a tree. That’s when a guy came tumbling out of the tree, wailing as he went. He had a few sprains, but was okay. He was the lookout of the house and, when I interviewed him, he had the worst stutter I’ve ever heard on a person. He was probably still trying to get the “P” in “Police!” out when the tow truck hit his observation post.

I’m not sure what it is which makes perps believe that climbing a tree will suddenly render them invisible. In a completely unrelated incident in Flagler County, deputies recently arrested a 31-year-old career criminal on multiple charges – assault on a law enforcement officer, felony criminal mischief, resisting arrest, and more. Using escape techniques he learned from watching an episode of the TV show “Cops,” he moved the handcuffs from behind his back to his front and pried open the door of the patrol car in which he was relaxing. While still handcuffed, he managed to climb a tree and subsequently fell out of said tree.

Over in Palm Beach, a 25-year-old “gentleman” recently set fire to a suburban Lake Worth country club and posted videos on Snapchat during the blaze.

“You know what?” the suspect reportedly stated. “Y’all gonna see a structure fire tonight. I hope you all enjoy.” He reportedly sent Snapchat videos during the fire to multiple friends and acquaintances.

Speaking of the improper use of social media, a man was recently arrested at his home after he posted a video of himself on Instagram being pursued by police officers in Hollywood (South Florida). The man posted a video of himself being chased during a Martin Luther King Jr. Day event which takes over the streets of South Florida each year. Detectives were looking through the man’s timeline on Instagram when they found a photo of his ATV with his license plate clearly visible.

We in law enforcement never, ever lament that these people are running around sharing the air with us. After all, they’ve kept us gainfully employed and always will. You just wonder about the whole mental health thing, as no one seems to learn from other people’s mistakes, much less their own. No one is inventing new crimes or new ways to get away with doing things.

Until next time, brothers and sisters in blue, be safe out there.