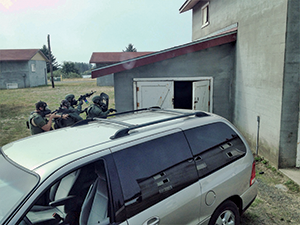 Responding to alarms, locating suspects, and investigating burglaries are just a few of the calls which require superior searching techniques and tactics.

Whether deployed on a SWAT mission or working the streets, we need to condition ourselves to look for the subtle threat cues associated with a suspect being present during these searches. Using our sense of hearing, as well as our vision, can help us to identify and locate potential threats. Listening for breathing patterns or the sounds of movement, such as someone scraping against a wall or floor, are all ways our sense of hearing can help us locate hidden suspects. Visually, we should train to look for small signs, such as part of an elbow or the outside sole of a shoe. We need to anticipate that we will actually find the suspect as opposed to being surprised to encounter a suspect. These are all tactics and techniques we should be using to successfully conduct safe and thorough building searches.

Most officers working today carry at least one flashlight with them at all times and should be taught effective ways to search using their flashlights. This includes handheld lights, as well as weapon-mounted lights (if authorized by their agency). The effective use of light includes how to use light as a weapon; how to cast light into a room effectively; using light and shadow angles to identify threats; and using light to magnify suspect movement.

Flashlight training should also cover the common pitfalls associated with backlighting or using too much light. Effective low light training can be the difference between looking and actually seeing. Lastly, as funny as it sounds, this type of training should always include reminders to look for light switches. It’s amazing how many times this is actually forgotten.

Searching and securing buildings is a fundamental task for SWAT. “It’s about applying the three Ts: time, tactics and troops,” says Don Alwes, a trainer with the National Tactical Officers Association (NTOA). Once the scene is secure and SWAT arrives, there is generally time to plan and coordinate a thoughtful response based on properly trained and equipped personnel.

Many teams have recognized that time is usually on their side and they are re-examining tactics. Tactics have evolved from being primarily dynamic entries and room clearing to slower, more methodical search tactics. Today, more and more teams are employing covert deployment combined with slow and deliberate search techniques. This has led to an increase in community and team safety. These tactics also allow more troops to be available to clear more areas.

Instead of dynamic room entry and clearing, it is now common practice to clear as much of a room from outside as possible before making entry. As the saying goes, “Getting in a gunfight is best done from outside the room.” Breach and hold; contain and call out; and limited penetration are all tactics which use time as an ally. These are becoming much more common tactics and are keeping our teams safer. Even alternative tactics such as car stop engagements and ruses are becoming much more common.

Take a Bite Out of Crime

Another great addition to many teams is the use of tactical K-9 teams. A properly selected handler and dog can be a force multiplier on a perimeter and while conducting building searches. A properly trained K-9 team can quickly search for, and locate, hidden suspects. When used in conjunction with breach and hold, contain and call out, and limited penetration tactics, K-9 teams can significantly improve the safety of our SWAT operators.

Dynamic tactics are generally defined by continuous activity/movement. Unfortunately, many commanders and operators believe this continuous activity/movement equates to increasing speed. The single biggest mistake teams make during dynamic entries and room clearing is trying to move too fast. The saying, “Don’t move faster than you can shoot accurately,” isn’t exactly correct. It should be, “Don’t move faster than you can process information and make good decisions.” It should never be about speed alone; it should be about decision-making and proper threat assessment.

In addition to improved tactics, the equipment available to our teams is getting better and better. Breaching tools have improved through the creation of specialized and task specific equipment. Ballistic shields have been used for a long time, but ballistic blankets are becoming much more common. Ballistic blankets have made the use of breach and hold tactics much safer by being able to apply ballistic protection against walls, preventing dangerous “shoot through” situations. Robots, drones, cameras, night vision, and thermal imaging have enhanced intelligence gathering which has improved

our ability to make informed decisions.

In too many departments, patrol officers are only given cursory training in building search tactics. Most of the time, this training occurs in the basic academy and generally involves the use of unrealistic scenarios containing multiple armed suspects. A significant portion of this training is provided by instructors who expect an unrealistic number of officers to respond to assist. In the real world, patrol officers often find themselves searching hallways and rooms by themselves or with one other officer. Officers need training which matches the reality of their operational environment.

The reality of the street is that patrol units seldom have enough officers on scene to help search buildings the way they were trained. How many officers can your agency afford to have responding to a residential or business alarm? In the uniformed patrol environment, officers have less equipment, fewer resources and training which frequently fails to match the reality of their working environment. Officers rarely have all of the resources needed to perform building searches the way they’ve been taught. In addition, their training and tactics have failed to provide them with the skills necessary to solve the types of problems regularly encountered during building searches.

Clint Smith, the Director and lead instructor at Thunder Ranch, likes to compare building searches to a game of pool. Just like a game of pool, searching a building is about angles, placement, anticipation, and skill. Searching buildings and playing pool require tactics which identify the best angles to allow players to outmaneuver their opponent. However, unlike the game of pool, the reality of searching unfamiliar buildings can be dangerous and potentially life threatening. The difference between the game of pool and the cold reality of doing building searches is that all of the players in the game of pool have rules to follow. In the real world of searching dark and unfamiliar places, only the good guys have rules to follow.

The solution is to provide realistic training for officers so that they can experience different angles and solve realistic problems using the number of officers commonly available during these kinds of calls for service. Patrol officers should be trained to use tactics and techniques which they can use to successfully – and as safely as possible – clear unfamiliar buildings, properties and rooms. We’re not talking about serving high risk search warrants where a large number of officers would be used. The calls for service where patrol officers find themselves doing the majority of building searches include residential and business alarms, burglaries and trespass complaints. More likely than not, one or two officers will be involved; any more than that can be a luxury.

A common problem officers encounter while searching is clearing bedrooms, small closets, bathrooms, and other areas by themselves while their partners are busy covering other angles and unknown threat areas. But, most agencies haven’t properly trained our officers to do this type of search. The majority of the law enforcement agencies in the United States are small- to medium-sized agencies consisting of fewer than 100 officers. Many small agencies may only have one officer on duty at any given time. If it’s common for one or two officers to respond to an alarm, we owe it to our officers to train them in building search tactics which allow them to successfully clear a building using one or two officers. Search tactics requiring three, four or five officer teams will not benefit small departments where one or two officers are clearing a residential alarm.

Even officers who work for large agencies will find themselves in situations where they may be required to search rooms by themselves. This includes closets, bathrooms, small sheds, pantries, and other confined areas where only one officer can enter or see. Training should include information about body placement and how to work angles effectively. Scenarios should include the use of these tactics while clearing a variety of doorways, hallways and staircases. Doing these things with one officer isn’t ideal, but it is the reality a large number of officers face on the street.

Searching buildings is a common task for SWAT operators and patrol officers. This high frequency task can be potentially hazardous. In both operational environments, the proper use of time, personnel, proper training, and suitable tactics based on the situation can help mitigate these hazards.

Todd Fletcher is a sergeant in Central Oregon with over 22 years of law enforcement experience. He has presented firearms and instructor development training nationwide and at multiple regional, national and international conferences. He owns Combative Firearms Training, LLC which providing firearms training and instructor development classes to law enforcement, military, private security, and armed citizens. He can be contacted at todd@combativefirearms.com.