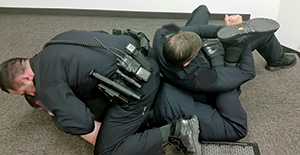 For those resistive suspects who are mentally ill or under the influence, the P.E.P. method favors the use of procedures to restrict and restrain physical movement which renders the suspect immobile, as opposed to utilizing pain compliance, wrist lock or arm bar techniques.

When I got to the scene, the suspect was poking his arms and legs with a hypodermic needle and yelling that he had to let the air out of his body. He also put out five lit cigarettes on his tongue and yanked out portions of his beard,” the officer told the jury at her murder trial. When the plaintiff’s counsel asked what force options she had used, the middle-aged officer said, “I did what we were taught. I used presence, verbal commands, pressure points, and my Conducted Energy Weapon (CEW), but nothing worked. After he sat on the ground and crossed his arms, I ‘drive stunned’ him with my CEW, but he only laughed at me and sat there. After backup arrived, we jumped him, held him down, and struggled to put on the handcuffs before he suddenly went limp.”

“Why did you use pressure points and eight drive stuns on a person who clearly demonstrated that pain didn’t bother him?” asked plaintiff’s counsel. “This is what I was taught,” she replied. “Even after we put him facedown, we could not control his arms. He was very strong.” Counsel also asked whether her restraint training involved training in pairs or in a group. “No. We only worked in pairs during handcuff training, but nothing about how to capture, and then control, a person on the ground.”

This hypothetical story highlights the need for change in use of force training. While the ability to use force by all officers is often necessary to capture violators and to protect officers and the public, criminal prosecution of Law Enforcement Officers (LEOs) for perceived misuse or alleged use of excessive force has become the norm rather than the anomaly. In most of these high profile prosecutions, prosecutors failed to reach a conviction. However, the officers who are criminally charged still pay a steep financial and emotional price.

Present-day society is demanding both officer and government transparency and accountability. Surveillance devices and cell phones can be found everywhere today, so LEOs must believe their actions are almost always being recorded. But, video does not tell the whole story. It is one-dimensional and must be forensically analyzed in many cases. Administrators must also educate the public about the shortcomings of video and that “force can look awful, but be lawful.” Public Information Officers (PIOs) must also “fight back” through social media and present incident facts to overcome Twitter feeds which spread rumor and partial truths. Defensive tactics, restraint, CIT, and ADA trainers must also recognize how LEOs capture, control and restrain individuals, and these techniques must reflect defensive strategies to match 21st century law enforcement.

Lt. John Domingo (the coauthor of this article) recognized the need for training LEOs to capture, control and restrain violators in pairs, threes, etc. and to work as a cohesive group when confronting driven individuals who do not react to pain compliance techniques or devices. Many Southern California law enforcement agencies, including the Huntington Beach Police Department (HBPD), where he serves as Watch Commander and trainer, have had great success with a program called P.E.P., an acronym for Platform, Efficiency and Proficiency.

Platform assesses the seriousness of the incident and what level of force is justified under the circumstances.

It educates LEOs in risk assessment before and during the confrontation. Because LEOs must face the consequences of an unanticipated arrest-related death of a driven individual, this training focuses on how LEOs might anticipate the confrontational outcome and ensures LEOs have a thorough knowledge of current force statutes, case law, agency policies, and an understanding of reasonableness. The Platform should be secure enough to support the worst-case scenario, serious injury or death of the violator which oftentimes is not anticipated.

Efficiency thoroughly educates LEOs about what their defensive techniques and devices are designed to do, and how to transition from one failed technique or device to a more successful one. Typically, LEOs struggle or fight with suspects on the ground, while numerous officers attempt to control the hands, arms and upper body. This approach allows the suspect to use the strongest muscle groups available to continue resistance. A good top or side mount position by the “top officer,” combined with leg control by the “bottom officer,” will allow quick control of the suspect. Systematic control of the lower and upper body allows officers to slow down the event and be more efficient. Pacing the event also allows officers to disengage from their “fight or flight” response and change their perceptions and reactions. Doing so increases the ability to think logically, enabling officers to quickly transition from the “reaction” part of the brain to the “thinking” part of the brain and systematically take the suspect into custody.

Photos one through six show how P.E.P. trained officers capture the suspect, control the legs and then apply restraints. After controlling the legs, LEOs should begin securing what they have and work from top to bottom. This systematic approach to restraining the suspect will help to expedite the apprehension. The faster securing of a suspect should reduce injuries to him/her, to the officers and make for better public perception.

Admittedly, there are times when LEOs are confronted with the immediate threat of serious bodily injury or death. In these events, LEOs must respond appropriately to the perceived or real threat. That’s where learning to transition, rather than de-escalate, is an important and necessary variable in the P.E.P. training.

When pain compliance techniques do not work, LEOs must transition to incapacitation and/or capture techniques. The P.E.P. program focuses on transition.

We suggest replacing the term de-escalation with transition. Why? It’s simple. LEOs use de-escalation skills at traffic collisions, during domestic disputes, while issuing traffic citations . . . almost every facet of the job. In contrast to de-escalation which is reactive, transition is proactive. Remember: If the suspect cooperates, LEOs only use limited, reasonable force. In contrast, if the suspect actively or aggressively resists, LEOs must be trained in how to transition their force levels and options. We are not suggesting LEOs should not attempt to de-escalate a situation, but training LEOs to be proactive will better equip them to quickly recognize what force options and devices will work best for that situation, and will allow LEOs to quickly decide among pain compliance, incapacitation and/or capture techniques, including the use of deadly force.

Proficiency, the third support of the P.E.P. program, focuses on the agency’s responsibility to require regular training, qualifications and to make sure LEOs maintain proficiency with force options and devices. Debriefing events, which include identifying failures and successes and why they happened, is a vital part of program success.

Over a five year period, pain compliance techniques were effective 30%-35% of the time, with the exception of OC spray. Carotid restraint effectiveness was about 65% of the time and TASER® was effective 62%-65% of the time. Capture techniques, which included securing the legs and lower body, were effective 80%-85% of the time. The use of additional restraint systems (aka RIPP® Hobble) were effective 93% of the time. Today’s LEOs deserve to be trained on how to critically think about analyzing the risk of a situation and how to transition force options and devices. After an LEO decides to use force on a resistant or combative subject, the key is doing so in an efficient manner to end the conflict as quickly as possible. After all, this is 21st century policing.

John Domingo is a Lieutenant with the HBPD. He is the Use of Force Coordinator and developer of the P.E.P. Program, with over 15 years as an Arrest and Control/Use of Force Instructor. He has also served as a SWAT and Negotiations Commander with training in Trauma Support. He has trained hundreds of peace officers throughout Southern California, and is a highly sought after presenter and trainer by other agencies. Lt. Domingo has been a frequent presenter at the Institute for the Prevention of In-custody Deaths, Inc. (IPICD) conference.

John G. Peters, Jr., Ph.D., CLS, CTC, serves as President and Chief Learning Officer of the IPICD. The author of several publications and texts, including Tactical Handcuffing for Chain and Hinged-Style Handcuffs, he is a frequent contributor to Police and Security News.