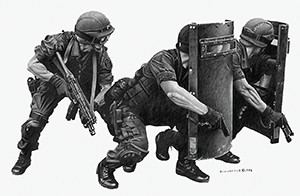 The objective of this article is to review and expand the tactics of walking and shooting while employing a handheld ballistic shield. This broader understanding helps to provide effective lethal force to active threats without distracting the operator, thereby achieving a higher level of live fire movement using unconscious proficiency.

Developed as a result of over 25 years of firearms training using handheld ballistic shields, walking while shooting has many subtle differences – all in need of simplifying.

The newest suggestion denotes applying the Combat Glide mentality to any number of lethal force situations in which a steady, smooth, shooting platform while you are mobile is desirable, but is not overly complicated. Especially since active shooter models have dramatically expanded to include all duty bound responders, the need to move and shoot in fastbreaking, deadly force encounters has now become everyone’s challenge.

The word mentality – rather than a specific walking style – is chosen because experience has shown that, across a broad spectrum of humans walking, the differences outnumber the similarities by far. Combat Glide instills a result as opposed to contrived, methodical steps or styles. Individuals must reach maximum stroke by incorporating their own best elements of the combined techniques into an individual comfort zone of ease and efficiency. It will take a little practice for some, more for others and none for a few. It seeks more of the natural than the induced. It’s best illustrated when it looks just right – not necessarily when it’s perfectly choreographed.

An old vaudevillian, Groucho Marx was one of the unrivaled Marx Brothers. He individualized a comic form of walking in which he took long, low, deep strides across the stage while staying upright. The style was a natural for shield work because Groucho’s line of attack was flat, like the deck of an aircraft carrier, and perfect for keeping a shield operator level and straight rather than bobbing up and down, pistonlike. The Groucho was widely adopted as a model for slow and methodical walking with shields, especially because it demands a disciplined sight picture without bouncing shot patterns up and down on the target.

The advantages of the Groucho are that it lowers the profile, avoids the jackrabbit ups and downs, lends horizontal stability to the sight picture, and the longer stride can be a degree faster than smaller steps.

The downside of the Groucho is that it’s somewhat unnatural.

The Step and Drag

Unlike the Groucho, the Step and Drag technique is more about the feet than the upper legs and posture. It calls for a generalized shuffling of the feet, keeping them low to the ground/floor, and dipping the forward part of the foot in a feeling, plowing motion.

The Step and Drag style was adapted to walking with shields for two main reasons. First, there tends to be a loss of vertical, peripheral vision owing to an opaque shield blocking the operator’s view of moving feet; a sliding, shuffling step might be less prone to collision. Second, the Step and Drag allows for a lower, flatter positioning of the feet. This gives the sense of “feeling” with the feet for the presence of unseen obstacles on the floor or unexpected changes in ground/floor surfaces.

The CQB, a military acronym associated with Close Quarters Battle, and the H&K, which evolved with the introduction and proliferation of the Heckler and Koch Model MP-5 full and semiauto sub-guns, are both sufficiently similar to view together as walking methods.

Gaining huge tactical dominance in the mid to late 1980s, the two techniques call for a rounded profile: body facing forward to threat; shoulders rounded; elbows tucked at the sides; toes, knees, and hips evenly facing forward; feet briskly padding low while advancing in full heel to toe contact with the floor/ground; and weapon stock positioned lower down off the strong shoulder while slightly favoring the central torso and muzzle aligned to threat in support of direct point-shoulder, target orientation.

The main advantages of both of these techniques are that they seem more natural, fluid and dynamic.

One disadvantage for stacked formations behind a ballistic shield is that this method doesn’t work well with the need for tandem feet mobility when the line is tightly joined. Two shooters behind one shield should be reserved for a slow methodical advance versus rapid deployment and immediate action.

The term Combat Glide was first introduced at a Batshield Instructor Training Seminar in February 2008. It was suggested by Constable Garth Hoffman of the Delta, Canada, Police Department during a range training exercise at which moving and shooting while advancing upon a threat was being conducted. The term was immediately accepted as a simple, encompassing vision of the components of effective tactical walking while deploying the Batshield and engaging a perceived angle of threat.

Combat Glide is defined as a smooth, tactical method of rapid deployment while operating a ballistic shield in conjunction with a firearm, while engaging a perceived lethal threat and simultaneously delivering controlled, accurate, dominating firepower.

A shield compatible rifle should be considered the primary option, while the duty pistol may be primary, secondary or transitioned to, as tactics, equipment and training may dictate.

Combat Glide should supersede slow and methodical Bunker shield styles of walking options, such as The Groucho or The Step and Drag, but is not intended to eliminate individual or natural choices of walking styles. Rather, Combat Glide is intended to combine a natural walking style with sure tactical elements such as smooth, level, balanced, determined, and direct, while advancing, firing and contacting an armed adversary.

The technique incorporates the elements of the stationary position of Combat Shield while adding the next level of on the move. The feet are shoulder width apart; the spine is vertical with a slight forward lean at the hips; the shoulders are raised; the head is down with neck pulled into the body like a turtle; and the main trunk is squared off to the threat while maximizing the ballistic coverage afforded by the shield.

Breathing should be natural and unrestricted. Respiratory efficiency diminishes in direct, inverse proportion to the three ascending levels of motor skills: fine to gross to complex. Adding the influences of major stressors multiplies the breathing deterioration factor. Smooth breathing should thus become a component of Combat Glide.

The body should remain flexible and nonrigid, while the feet should track directly forward, sideward or rearward in a measured, low, full contact, secure, and positive advance.

Steps should be shorter than the standard 30 inch stride, yet not overdoing step range to exaggerate in either giant or baby step extremes. Rather, a comfortable step distance should be achieved; one which feels appropriate to the conditions of the surfaces encountered.

Whether a mission requires a forward, sidestep, reverse step, or any combination of movements, the Combat Glide should be performed so as to reduce, or eliminate, undesirable rocking or motion of the shield and the weapon platform. When moving in any direction, the feet should NOT cross each other.

The speed of the Combat Glide should be in proportion to the ability of the shield operator to process the environment being traversed. While different operators’ speeds may vary, the shield operator’s individual Combat Glide should not exceed the speed required to safely and efficiently navigate the terrain, assimilate the complexities of the mission and comprehend and react to the nature of the threat(s) encountered.

Firearm instructors should multiply safety redundancies on live fire ranges when conducting shooting exercises with multiple advancing shooters simultaneously. Numerous safe and dry, doubly inspected, empty weapons drills should precede live fire exercises. Dry drills should be done to the complete exhaustion of doubt before going “hot.” Of major note is to keep shooter lines advancing on the threat in a “dress right dress” movement so as to strictly avoid any cross fire potential.

A bonus to executing multiple repetitions of safe, dry moving and shooting drills is the opportunity for shooters to develop and perfect the Combat Glide concept in a practical sense of adapting one’s own smooth and natural form, incorporating each of the known best practices.

The use of repetitions should guide the shield operator and the team toward the optimum Combat Glide.

Everyone walks according to their own individual body shape, size and foot structure. These unique styles are more different than they are similar. Rather than teaching something like a Groucho step – which typically takes hours of practice and conditioning to get it right – it is easier to teach the Combat Glide and let the student figure out how to best perform it. The goal is to look beyond past practices dealing with the handheld shield as it is properly deployed while (walking) moving and shooting.

Specific stepping can be too unnatural. Too much thinking about how one is walking is probably more elaborate than is practically necessary. Just like shooting, it should be competent without consciousness; there’s already an information overload in progress and it’s daunting enough to process that without having to occupy more thinking on the mere act of moving.

Not to be dismissive of mission specific tactics, nothing about moving and shooting in this review should be deemed final or exclusive. Ultimately, it is the lifesaving job description of law enforcement professionals which must drive the totality of the circumstances.

Nothing is off the table; everything in its place of purpose and priority. Indeed, given fast-breaking, surprise developments, each of the mobile options are interchangeable and interoperable and should be employed as necessary. If a review of the past 100 years of after action briefings were compared, it is most likely there are no two quite the same. So flexibility, adaptability and individual determination often mark the successful warrior’s edge.

Worldwide events reveal that shooting on the move has advanced to a higher premium. Thus, the optimum objective is to combine the best of all known methods and experiences, and then meld your own individual walking, shooting and shielding skills repertoire.

Start slow and sure; glide and speed will follow. Slow is smooth – smooth is fast.

Note: The lead illustration is complements of Dick Kramer Studios. Additional artwork can be found on their Web site at www.dickkramer.com.

Lt. Al Baker (NYPD – ESU, retired) is considered among the leading experts worldwide for the development, application and training expertise on all types of ballistic shields and has well over 500 agencies trained in his techniques.

Jim Weiss is a retired lieutenant from the Brook Park, Ohio, Police Department and a freelance writer.

Mickey Davis is a California-based writer and author.