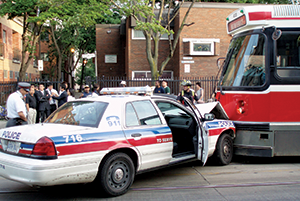 It starts out innocently. “Boss, you got a minute?” says one of your officers as he walks by your office. And, then, after a little bit of stammering and foot shuffling, your subordinate proceeds to tell you about the mistake he made, thereby dropping the whole thing right into your lap. Now, what do you do?

Mistakes are a fact of life. Since they cannot always be avoided, the success of your career may depend on your ability to handle mistakes whenever they occur. There is nobody in your department who is perfect (including you). Recognizing this simple fact should help you relate to the individual whom you, due to your position, must chastise for his/her mistake, judgment or behavior.

As a police commander, you will sometimes have to criticize the actions of one of your officers. How you do it may hold the key to whether or not your actions will result in positive change or counterproductive behavior and animosity toward you and the department.

Here are ten simple guidelines which might help you when one of your subordinates makes a mistake.

Until you have all of the facts, you cannot determine for sure that someone “made a mistake.” Don’t take someone else’s word until you are personally satisfied that something did go wrong and that the person responsible is the person to whom you will be talking.

Once it has been determined that a mistake has occurred, keep in mind that all mistakes can be handled. Stay calm and realistically evaluate the situation and how much damage has been done. When you think it through logically and the initial shock has worn off or the immediate crisis which may have caused the mistake has passed, chances are that there may be less damage than originally thought.

Identify the conduct which you find faulty or which precipitated the mistake. What caused the mistake is more important than who caused the mistake. It was conduct or action which caused the problem, not the person. Therefore, direct your criticism at the action, not at the person. Getting personal – especially if there are preexisting strained feelings between an officer and a supervisor – will only result in personal resentment and hard feelings which could last an entire career and cause more difficulties in future interactions between an officer and a supervisor.

Be sure that you address specific conduct at the date, time and place it occurred. A phrase such as, “You’re always late with your reports,” is not acceptable. Opening a discussion with an officer with a comment like that immediately puts the officer on the defensive, especially since he probably isn’t always late with reports. He knows it, you know it and a statement like that shows the officer that you have already formed a bias opinion and will shut down any open discussion or dialogue. A phrase such as, “You’ve missed two deadlines for submitting your reports in the last two weeks – on April 20th and on April 27th,” is less antagonistic and much more acceptable because it is based on facts, not on personal generalities.

There may be a legitimate reason or a reasonable explanation for the conduct in question. “Sergeant, did you have a reason for missing this deadline?” gives your subordinate the opportunity to explain his/ her side of the story and to offer reasons for his/her actions. This continues the discussion started in step #3 and may allow you to gain more information and facts.

Of course, it may just result in him giving you an unacceptable excuse for his conduct. But, either way, it is the “fair” thing to do, since the person will have the opportunity to present his case. Based on my experiences (as someone who made more than a few mistakes along the way), I always respected a boss who I thought was fair, even if discipline resulted.

“I know that you had a difficult situation that night which you would normally handle well…” or “You are a good sergeant who is normally dependable…” – positive openings such as these can be very helpful in reinforcing the overall worth of the individual to the department, while still allowing you to get to the specific problem area.

For many years, I have been a big fan of the “One Minute Manager” style of supervision. Part of that involves a really good technique for correcting behavior which involves three separate parts. First, praise your subordinate for usually doing good work or usually making good decisions. Then, discuss the error or mistake he made using steps #3 and #4. Explain the impact that his decision had and what needs to be done next time to not repeat the mistake. Lastly, remind him that he is a valuable employee and how much you think he is capable of doing.

I think there is a big difference in handling a mistake made by an employee who doesn’t know any better or who is unfamiliar with a task (such as a newer employee learning the ropes or an experienced officer working a new assignment). In this case, you should redirect and change behavior through additional training or clarifying a policy, but not through a reprimand or discipline. Sometimes, however, mistakes are made by employees who “should have known better.” If that is the case, then a reprimand or discipline is appropriate in the case of deliberate mistakes or perhaps regressive behavior by your employee.

It is only fair that you handle each of these situations differently. In either case, your goal is to prevent the mistake from happening in the future.

Address the issue with your subordinate as quickly as possible. Don’t wait to address the issue of late reports or a “misunderstanding” with a policy and procedure until eight months from now when annual performance evaluations are due. Regardless of whether the mistake is critical and crisis creating or whether it’s a small oversight, the time to address the issue is now. Say what you have to say; criticize as you see fit, based on the facts; and get out.

Even in a meeting after a controversial or critical mistake, try not to raise your voice, get angry or use sarcasm during the interview. Choose your words carefully and comply with any department or union contract guidelines for such interviews.

Depending on your policies and/or the severity of the mistake, you may need to advise your supervisor of the situation. You may also need to advise anyone else who will be directly affected by it as well. However, that’s about it! There is no sense in broadcasting a mistake to the entire organization if it’s not necessary.

Part of your responsibilities as a supervisor is to deal with problems. What you need to do is formulate and then act on a plan of action to correct the mistake and to minimize the effect of it. Take the steps necessary to ensure that it does not happen again. Keep your supervisor informed of your progress as you logically work your way through the entire situation.

And, depending on the magnitude of the mistake, you should record all of the details of the incident: how it occurred, when and how you learned of it, who you notified, and what actions you took. This documentation will be of great value if you have to answer questions at a later date. It will also tend to protect you, your subordinates and the organization by documenting the events at the time that they occur.

When you handle problems and mistakes calmly, logically and professionally, you will gain the respect of your subordinates and your superiors. This respect, coupled with the knowledge and experience you gained, should make you a prime candidate when it comes to future promotions.

Note: Police Management Services, LLC is pleased to announce to the readers of P&SN that it is offering a new online supervisory training program. This online training is the equivalent of a four day training program at an academy. Please check the business homepage at www.PoliceManagement.com and click on the link, “Training Programs.” For additional information, you can reach them by E-mail at MCarpenter@ policemanagement.com or by phone at (518) 761-9708.