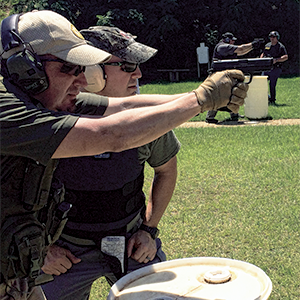 In recent years, we’ve seen a dramatic change in how law enforcement officers are trained, with some firearms training evolving to more closely reflect the reality of actual street encounters.

In the not so distant past, firearms training was mostly conducted “on the line” under strict control and command of the range master and his “range safety rules.” Unfortunately, in some places, this is how training still occurs. The addition of these highly controlling “range safety rules” to the Firearms Safety Rules have created a barrier which needs to be breached in order to effectively train our officers.

Range safety rules are rules specific to a facility or training site which go above and beyond the standard Firearms Safety Rules. There are beneficial range safety rules such as requiring shooters to wear ear and eye protection; however, other range safety rules may prevent “bringing the street” to the range. These include examples such as the “180° Rule,” no rapid fire and rules preventing anyone from being forward of the firing line. On the face of it, these seem like basic rules designed to keep everyone safe. In practice, they sometimes prevent us from training like we fight.

Let me provide a few examples. The “180° Rule” is designed to prevent anyone from being down range or being unintentionally covered by a shooter on the range. However, if our goal is to prepare officers for the realities of the street, the 180°Rule prevents us from moving around in a 360° threat environment safely with firearms out, ready to defend our lives and the lives of others. Instead of making us safer, this range rule prevents us from training for the reality of the streets. If we move around in a 360° environment while training on the range, then our muzzles will be pointing somewhere other than downrange.

On the street, everything is technically “down range.” There are many “on-the-job” scenarios where officers would be moving “up range and downrange” with their firearms unholstered and ready: building searches, high risk vehicle stops, high risk arrests, active shooter incidents, and others. Therefore, the 180° Rule doesn’t allow us to train like we work.

Just to be perfectly clear: I’m NOT advocating that anyone do something stupid like having trainees positioned next to target stands while another officer is firing live rounds. We’ve all seen those videos and I’m not condoning this kind of stupidity in any way, shape or form. But, we need to bring realistic training to the range in spite of unsupported range safety rules.

The best way to keep officers safe during realistic and street relevant training is to ensure instructors understand what the training course is trying to accomplish; how the drills are going to be run; and how to position themselves to maintain a safe training environment. When instructors understand the drills and know where shooters are going to be moving, they can anticipate potential problems and put themselves into the proper position to prevent potential safety issues. The best way to mitigate dangerous range conditions is by improving instructor positioning – not by enforcing subjective range rules.

Instructors should be watching their shooters during drills and other courses of fire. They should be moving with the shooter and putting themselves in a position where they can intervene when necessary. This may include controlling the firearm and guiding the shooter safely from one place to another in the event the shooter loses situational awareness. Instructors who are active participants in every course of fire will be in a better position to provide safe and realistic conditions for everyone on the range. Instructors should not be bystanders and those who fail to become actively involved are standing in the way of street relevant training.

Another method for bringing the reality of the street to the range is to combine multiple skills into one drill. This requires officers to prioritize and make correct decisions. The addition of otherwise simple factors can greatly increase the reality of our training environment. How about introducing more advanced communication on the range? I’m not just talking about communicating between officers or even between suspects and officers. We should include the additional responsibility of communicating with our dispatchers. Examples include allowing officers on the radio to ask for additional assistance; coordinating the arrival of responding officers and medical units; and advising dispatchers of our status are other key factors we can add to bring reality to the range.

The next step can be to combine this with additional skills like doing a tactical reload, self check, buddy check, movement to a better cover position, and providing emergency first aid. A combination of these skills are incorporated into nearly every officer involved shooting, so we should include these elements into our firearms training programs. If an officer believes the “danger has passed,” then it might be a good idea to reload. Depending on the context of the incident, there may be a better position of cover available to the officer. We should be training to constantly look for these positions of advantage. While looking, officers can do a self check to make sure they haven’t been injured; then, they should do a buddy check to make sure their partners haven’t been injured. Lastly, we can combine our firearms skills with our first aid skills by providing emergency medical assistance.

Ultimately, a simple and straightforward drill can be a tremendous learning experience when a “blind” element is added. This blind element is a surprise and isn’t included in the drill briefing and demonstration. It is simply included as another event which occurs during the drill. For example, we can introduce a designated trauma victim on scene to simulate the decision-making our officers face during an officer involved shooting. This victim could be another officer or a bystander. Once officers believe they have completed the drill, communicated effectively, did a self check, buddy check, and reloaded, they have to respond by providing emergency medical care to the injured victim. This is only one example of how we can combine multiple skills into our drills, add additional decision making responsibilities, and bring a previously unknown element into our training in order to better prepare our officers for the realities of the street.

Firearms instructors need to develop drills and courses of fire which are practical, realistic and street relevant. Our firearms training curriculum needs to progress from simple qualification to combat preparation. Officers deserve to be trained to the highest possible standards. Let’s set those standards by providing realistic training on the range so officers are prepared when they hit the streets.

Todd Fletcher is a patrol sergeant in Central Oregon with over 21 years of law enforcement experience. He has presented firearms and instructor development training nationwide and at multiple regional, national and international conferences. He owns Combative Firearms Training, LLC, providing firearms training and instructor development classes to law enforcement, military, private security, and armed citizens. He can be contacted at todd@combativefirearms.com.