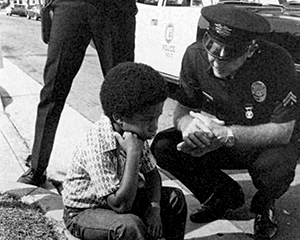 Why Don’t We Talk Anymore?

You can chalk up this entire installment of “…and nothing but the truth” to me being old and outdated, I suppose. It’s definitely going to sound like an old guy railing against modern technology, but I need to vent and there’s no town square with a soapbox for me to climb. The closest I can come is this column and I thank you for reading it. By the way, this column is 30 years old this January. (You may applaud.)

I think about the modern world a lot, and I think it is vastly cool and exciting in many ways (if I had the time, I would buy a drone and fly it all over the place). We do, however, pay a price for living in the digital age: the loss of each other. And, to avoid getting into a long tirade about how people go out to restaurants together, but aren’t really together because they are sitting there and texting, let me tell you that this is about police work. Yes, it’s about our profession, and the loss of human interaction with citizens – and with each other. It may have started with the loss of each other, the day they put laptops in police cars so that we could run tags and run people ourselves.

When I was in patrol (Be careful of my rocking chair, will you? It might crush your toe if you walk too close.), we had a frequency called channel D which was entirely for running license plates, criminal histories, serial numbers, and so on. A person controlled channel D, a woman sitting in a booth in the communications building who not only had an idea of what you were doing, but knew where you were and why you were doing it. Like the dispatcher of the primary frequency, hearing her voice over the radio was reassuring. I knew I had help if I needed it and I could keep my eye on my subject or his car, while I spoke into the mike and gave her information, rather than turning my attention to a laptop screen and away from someone who might just have the intention of harming me. Laptops in police cars made the channel D dispatcher obsolete and made the “air” a less friendly and agreeable place.

This type of obsolescence can be seen and felt everywhere: the bank, the tollbooth, gas stations, retail stores (where you can now buy groceries or hardware and do the entire transaction yourself, without even looking someone in the eye), and airports where you check in and get your boarding pass on your own and the flight attendants don’t even do their little “here are the exits” spiels anymore; it’s all on video. You can’t call anyone anymore for tech support or customer service; Web sites try to make it really hard, if not impossible, for you to access a phone number. You work out your problem via E-mail or something called “discussion boards” (yeah, big fun!).

And what about police work? We still have more of a connection with people than most professions. We have to. When we get called to a scene, we have to communicate with the citizens and see if we can assist in solving the problem. Our ability to do that is waning, though, and the citizens’ ability to communicate is also deteriorating for the same reasons. We live in the same, ever dehumanizing world. You don’t think it’s having an effect? How and when did we lose the public relations battle? Why are there premeditated shootings of police officers and widespread discontent with who we are and why we do it? No one, my friends, is communicating. We don’t even want to communicate anymore. When a police shooting incident starts spreading through the social media circles with lightning speed, everyone finds it easier just to believe the rhetoric, rather than stand in front of a real person and have actual discourse about it. A mantra is something you used to have to repeat every day. Now, all you have to do is light a fuse and the mantra will go streaking across a million smartphone screens in a matter of a couple of minutes. And, it will be believed because nobody knows, or cares to know, how to stop and communicate the old-fashioned way.

Defenders of automation and depersonalization argue that there are more venues for conversation and communication because of blogs and social media. But, they’re wrong. Listen to the brilliant social critic Simon Sinek (Start with Why) explain the problem. In one of his “Ted Talks,” he expounds on the critical necessity of human interaction and how it is inexorably linked to something we seem to have lost: trust. He tells us that, as human interaction decreases, distrust increases. “A ‘conversation’ doesn’t happen on a blog,” he warns, “these are human experiences.” I tend to agree.

“Technology,” he goes on, “is wonderful at speeding transactions…for resourcing and finding people, but it is terrible for creating human connections. You can’t form trust through the Internet.”

Police work used to be human. We used to find a juvenile delinquent and take him home to his mother – not to the Juvenile Assessment Center – and mom would make us a cup of coffee and sit with us in the living room and talk about the incident (while the dad whipped his butt). Cops knew the people in the neighborhood and they talked to them. There were foot beats and the officers on those beats knew the store owners. It wasn’t perfect, but I think trust was something we had – or at least strived for. Where is it today? Most people might give you a sarcastic laugh if you asked. Ferguson, Baltimore, Dallas, New Orleans…all are bleak memories in the history of law enforcement. There were people from all walks of life who went on TV and on other public forums to try and explain what happened, to try and educate people as to what a grand jury was and how it works. They tried.

But, if someone doesn’t trust you, they’re not going to listen to anything you say and it all got drowned out by the screaming and the fires and the gunshots.

By the time you read this, it will be 2017 and I sincerely hope that we can find a way through the digital jungle and start talking to each other again.

Happy New Year to you all.