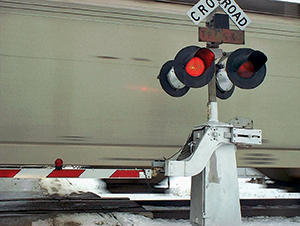 Fool me once, shame on you!… A woman drove her vehicle through an activated railroad crossing guard outside Garner, North Carolina. To avoid the oncoming train, she sped across the tracks and hit a tree. Two weeks later, the same woman in the same car – with a still damaged front end – was seen driving through the same crossing arm with the same warning lights and bells activated. But, this time, the car got stuck and an Amtrak train with 222 passengers hit the vehicle. No passengers were injured and the driver was found walking around the scene with only minor injuries. (Do you think it might be a good time for the courts to consider revoking her driver’s privileges?)

To cap it all off, he should go on Facebook and tell the world he thinks the presiding judge is an idiot… A 27-year-old man was recently charged in York County, South Carolina, with dealing marijuana. The accused man apparently had the (unfounded) belief that York County deputies do not monitor Craigslist – because that is where he had advertised (“I Sell Weed”), in a notice with his photo, address and price ($200). It wasn’t long before an interested party responded to his advertisement. (But, the only cash that changed hands was from a bail bondsman.)

The concept of “three strikes and you’re out” is apparently lost on the Brits… A 49-year-old man in Sunderland, England, was recently arrested (again) – for the 448th time – on alcohol-related charges. The year started “well” for the man, with only 14 collars in the first three months, and he cleaned up briefly before a “family bereavement” sent him spiraling downward again. His current lawyer admitted that his client has been in court more often than he himself has. (To which he responded, “I’ll drink to that!”)

I’ve heard of bathtub gin before, but… A woman in Knoxville, Tennessee, was suddenly overcome by a craving for barbecue brisket. So, she bought herself a chuck of meat and fired up the smoker. Well, that’s not quite right – she didn’t have a smoker. She built a fire in her bathtub and placed a rack over the rim of the tub for the brisket. It quickly became apparent that her plan had not been well thought out, since the tub was fiberglass and not ceramic. The tub didn’t last long, quickly melting into a smelly blob and the fire department was called. Both the tub and the brisket were declared a total loss. (It’s just as well, since she was planning to clean up afterwards by washing her paper plates in the dishwasher.)

Knives, loaded handguns, violence…pro wrestlers could learn a lot from their female fans… At a monthly pro wrestling show in Ringgold, Georgia, a 59-year-old woman who had enough of the “bad guy” wrestler, reportedly jumped into the ring to rescue the “good guy” wrestler, whom the “bad guy” had “tied up” and was beating with a chair. First, she cut the “good guy” loose with her knife and then pulled a loaded handgun on the “bad guy” (an act which got her arrested by sheriff’s deputies). She admitted that the “bad guy’s” earlier “mean” banter with ringside patrons had unnerved her, especially when he told her to sit her “toothless self back down.” (This dear lady seems imminently qualified to run for the office of president of the Ringgold Women’s Cultural Society.)

Gentlemen, start your engines – then run like heck!… In northern China, police said an argument between construction workers escalated into a demolition derby-style clash of heavy machinery which left at least two front-end loaders flipped over in the street. Online video reveals several front-end loaders ramming each other while passenger cars scurry away from the cloud of dust. The construction workers were from two companies competing for business. China’s construction sector has fallen on hard times, with growth down by two thirds from its peak a decade ago. (It sounds like the basis for a new reality TV show.)

The judge should give him house arrest… Court documents reveal that a 70-year-old Kansas man robbed a bank in order to go to jail and avoid his wife. He had told his wife following a fight that “he’d rather be in jail than at home.” After writing a note stating that he had a gun and wanted money, Lawrence John Ripple walked to a bank in Kansas City, Kansas, and handed it to the teller. The teller gave him nearly $3,000. Instead of making a hasty getaway from the Brotherhood Bank and Trust branch, he took a seat in the lobby and admitted to a security guard that he was the suspect. He was taken into custody and the money was returned to the bank. (I hope that this doesn’t start a robbery trend in our country known as “The Ripple Effect.”)