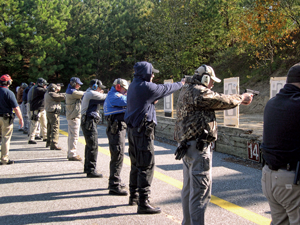 Why have a great many officers grown indifferent to firearms training?

Many law enforcement officers regard firearms training as one of life’s many inconveniences, much like a dental checkup or filing a tax return. They know it’s not the end of the world, but there are many other ways they would rather be spending their time. Unfortunately, many officers fail to make the connection between the range and the street. Trainers not only have an obligation to provide the “how to,” but also the “why” we are doing things a certain way. The fact that “we’ve always done it this way” simply doesn’t cut it.

I’ve been involved in recruit level training for over 30 years and I can say that most new officers have a very gung ho attitude towards firearms training. They recognize that employment in this field is contingent upon successful completion of their initial firearms training. No doubt, it is made very clear to academy trainees that the world is inhabited by all sorts of antisocial types and that, in the course of their career, they may have to employ deadly force to protect their life or someone else’s life.

But, somewhere along the way, that initial enthusiasm begins to waver. Firearms training becomes drudgery. Administrators are sometimes less than enthusiastic towards training and this is readily apparent to the troops in the trenches. I would also submit that those of us who are involved in training also need to shoulder some of the blame. If the sum total of your training consists of firing the same old qualification course, it should hardly be a surprise that officers don’t see the street relevance and aren’t buying the message.

Take It to the Next Level

Firearms training is typically conducted on three different levels. The most basic is static line or square range training, where we master and refine our basic skills. This is also where we test our marksmanship skills on qualification day. The static line allows us to safely train fairly large numbers of individuals simultaneously. But, we need to recognize that static line training is not the end all fix.

Many of the exercises we use to have officers demonstrate proficiency are merely an evolution of PPC-style shooting popularized by the FBI way back in the 1930s. A humanoid target is placed downrange and participants fire a predetermined number of rounds from different positions and distances. Time frames are typically pretty generous. While there are indeed some courses of this type which are challenging, most do not reflect the reality of the street and, at best, are merely a means of assessing basic marksmanship skills.

For many years, I’ve made heavy use of dynamic level drills in my training and have enjoyed some pretty good results. Typically, a single officer has to solve a problem which is a bit more open-ended. Much like real life, officers can be paired up to familiarize them with team tactics. One or more instructors can evaluate the exercise which could include more than one threat, innocent bystanders, movement, cover, and other elements. If you can conjure up an image of an IDPA course of fire, you can probably get an idea of what these types of drills might look like.

Dynamic level training allows the instructor to assess multiple elements in a single exercise. There simply is no hiding among a group of 20 other shooters, like in static line training. An instructor can now get a better idea of what each shooter’s capabilities are and correct any deficiencies they spot. These drills only require a handful of rounds and I find them to be a much better assessment tool than the traditional 60 round PPC-style qualification course. In developing dynamic exercises, you are only limited by your imagination.

At the top of the pyramid, we have interactive training. This can take the form of an electronic simulator or role-playing exercises with marking cartridges. In this type of training, participants have to apply the elements of practical marksmanship and tactics in carefully scripted scenarios. Interactive training, either on simulators or in role-playing exercises, assesses judgment in fast breaking situations. They do, however, require special equipment and are instructor intensive. In view of that, further discussion will be limited to static and dynamic level training and how we can improve it.

There are, of course, any number of limiting factors which can put a damper on the quality of training we would like to offer. Make no mistake about it: Quality training requires an investment in time and other resources. When times are tough and budgets are slashed, training is often first to take a hit. Adversity aside, we can still make it work. To my thinking, we can conduct quality training for the same price as poor training. You’ve just got to be smart on where you devote your resources.

The hardest sell is often the administrators and command staff. They must be made to understand that better trained officers are in everyone’s best interest. Officer safety is enhanced, the public is better protected and liabilities are reduced. Is your budget too tight to provide proper training? Guess again. There is case law which suggests that budget constraints are not an excuse for providing substandard training.

Be advised that merely shooting the qualification course over and over is not training. Qualification is a measurement of marksmanship skills and does not address many critical areas. Time frames are far too accommodating and the targets utilized often give officers an inflated idea of their combat potential. Does your qualification course address more than one threat, movement, innocent bystanders, poor light, and highly compressed time frames? These are just a few elements which officers have to deal with in the harsh real world.

Creating realistic courses of fire is not especially difficult, providing you have a little bit of imagination. I have often taken a real-world, police action shooting and devised a dynamic level drill around it. There is no single exercise which can address every possible contingency an officer might face, but you can include multiple elements into a single drill. For example, an officer may have to draw and engage a threat while seated in a vehicle, exit and move to better cover. From there, he/she might engage a second threat in close proximity to an “innocent bystander.”

Currently, there are hundreds of different target options out there for the taking. Classic designs, such as the B-21 and B-27, are still in wide use, but we can do much better. Many of the old school targets feature an overly optimistic or anatomically incorrect high value scoring area. One can now select from designs which better reflect reality and require better shot placement to achieve a high score – train hard, win easy.

When training on the road, I’m often tasked with using whatever targets my host provides. To create a more challenging target, I use eight inch paper plates in the chest and 3″ x 5″ index cards in the head. Targets can also be folded into half or thirds to represent a hostile threat partially protected by cover.

The real world is populated by both good and bad people. Shouldn’t our training reflect the same? Placing “no shoot” or innocent bystander targets in close proximity to threat targets is yet another element of realism we can incorporate into our training. Targets come in paper, cardboard, plastic, or steel. Ideally, I like to use a mix of all the above in my training. To condition a proper mind-set, I make it a point to use pictorial targets from time to time, particularly versions which aren’t squared off to the shooter. Quite simply, we can’t lose track of what we might have to shoot at.

When I first got into firearms training, I recognized that many of the traditional exercises really didn’t bear any semblance to real life. Over time, I did stumble upon a few which made more sense and I began to come up with my own. Some I would categorize merely as skill builders which are designed to enhance practical marksmanship or operational skills. Others are down and dirty tactical exercises which allow the instructor to get a handle on a shooter’s combat potential.

As a rule, I like to keep my tactical drills short and sweet. Round counts are fairly modest, but participants have to perform multiple tasks. These could include moving to cover; reloading; threat discrimination; verbalization; and, of course, practical marksmanship. Often, I find the same drill can be used for handgun, carbine or shotgun. Because round counts are low, creating these different sorts of drills should not burden even the tightest budget. And, by the way, doing something with a little more street relevance is likely to win over more officers who feel that they have now had a positive training experience.

Ultimately, we are all responsible for our safety on the job. If your agency doesn’t go the extra yard, you’ve just got to take up the slack. Do a little self-assessment and consider in which areas you would like to improve. Whether it’s shooting a basketball or working out, we like to practice the things we do well. Self-gratification is human nature, but we really need to work on the things we don’t do so well.

Shooting that same predictable course of fire does not provide officers with the skills they need to prevail in areal-life encounter. Quite frankly, if your training regimen is stuck 50 years in the past, you remain at a serious disadvantage.

Take a hard look at what you can do to prepare for violent encounters. Consider that bad and evil people will probably initiate the action and you’ll have to play catch-up. Getting squared away might require some out of the box thinking, but those of us who are trainers have an obligation to bring the very best to our students. Raise that bar! Do it faster and do it in the dark. Resist that notion to dumb down the standards in order to get more people to pass. Like it or not, this is a high stakes game. It’s incumbent upon us to offer the best training possible.

Captain Mike Boyle served with the New Jersey Division of Fish & Wildlife, Bureau of Law enforcement, and has been an active firearms instructor for more than 30 years. He has been an assistant police academy director and remains active as an academy rangemaster and instructor. Mike has served on the Board of Directors of the International Instructors (IALEFI) since 1996. He is the architect and coordinator of IALEFI’s Master Instructor Development Program.