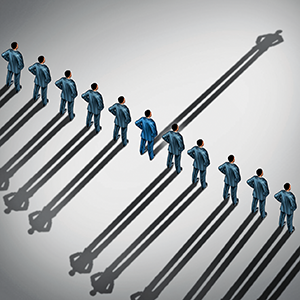 The Will to Lead

There is no substitution for the will to lead others.

The young police officer thought his journey was over. He had received very good reviews on his performance evaluations. He had worked hard to get his college education while on the job. He had prepped diligently for six months for the written promotional exam and certainly impressed the oral board with his responses. He got the promotion to sergeant and a nice pay raise to go with it. However, soon after his promotion, things started to go wrong. The men and women in his command kept their distance from him. They didn’t seem to be enthused about their work. They went through the motions, but, often, tasks and assignments weren’t completed on time or correctly. Conflicts developed between subordinates which affected the rest of the shift. Sick leave dramatically increased and morale plummeted. The new sergeant and the command staff soon realized that he was in trouble.

The newly promoted commander didn’t fare much better. He performed adequately as a supervisor and was then promoted to the rank of captain, but he never really felt comfortable. He retreated into his office, found many excuses to blame others when deadlines weren’t met and was seldom sure of the fewer and fewer decisions which he was almost forced to make. Maybe another training course would help …maybe a few more years of experience…maybe if he had better subordinates… maybe….

The truth is that there was a missing piece of the puzzle in both of these situations. The young police officer prepared well for the promotional process, but he did not prepare for the promotion. Maybe he was motivated because he wanted the pay raise which came with the title, or maybe he was motivated because he liked the idea of being in charge. Who knows? But, he was not motivated to assume a position to take charge and inspire others under his command. He was lacking one of the most important requirements for success in a leadership position – the will to lead. It was the same thing with the sergeant who got promoted to captain. His fear of failure or his insecurity in his new position crept in from all sides and took over.

Successful leaders at any rank or position must have the will to lead; the will to make things happen; and the will to command and control people, equipment and events. For some, this phrase may be a little subjective or hard to explain, so let’s expand on this.

Officers who aspire to get promoted merely for increased pay or prestige is likely to find more and more difficulties in their new position because perhaps the most important skill they need to succeed is missing – the will to lead. Clearly, there is a difference between wanting to get promoted and wanting to lead. Without the will to lead, a supervisor or commander will be doomed to mediocrity, at best, and that in turn leads to uninspiring performance from the subordinates who work for him. Ultimately, sooner or later, this lack of the will to lead can result in a mediocre career trying to supervise uninspired subordinates and, perhaps, the complete failure of the assigned mission. Such is the fate of a weak-willed commander.

Successful commanders prepare for their positions very much like the young officer in our opening scenario. However, the successful commander’s defining characteristic is his will to lead. So, let’s talk about a few things which separate “leaders” (who clearly have the “will to lead”) from someone who is just a “boss.”

Just being placed in charge of a unit or being given a new title doesn’t automatically mean you can lead and inspire people. You must, after being promoted, take charge and begin leading. A leader who understands his/her role and who has the knowledge, ability and the “will to lead” will quickly be seen as the person in charge. People want to be led by a strong and competent leader. Assuming the leadership role by inspiring your people – not “ordering” your people – will improve their performance both individually and as a cohesive unit.

Leaders understand that problems are inevitable annoyances of life and police work. Where a boss will often fret, overreact and place blame, the leader takes immediate action to solve the problem and minimize the damage. After the immediate problem is solved, the leader takes steps to ensure that the problem doesn’t recur again. Then, the entire unit moves onto bigger and more important accomplishments. Subordinates trust that their leader can, and will, solve problems. Meanwhile, the subordinates of a “boss” worry about being the target of the “blame game” or face the insecurity of not knowing how, or if, the boss can solve a problem.

Leaders Surround Themselves with Competence

In addition to being competent themselves, leaders seek out the best qualified, most progressive employees they can find and develop them. Where bosses may be afraid of such bright and energetic people taking their jobs, leaders welcome and want outstanding employees to be on their team so that everyone can maximize their potential. A leader seeks out team players who also show the “will to lead.” A true leader is secure enough in his/her abilities to help develop future leaders in his/her command.

Risk taking is the arena where it is easy to distinguish between the safety seeking bosses and the more risk taking leaders. Leaders are more willing to speak out with facts, solutions and options and move forward rather than looking back with blame or burying their head in the sand to avoid controversy. The will to lead makes leaders more willing to “go to bat” for their subordinates and dare to try new and innovative ideas. Leaders do not take uncalculated risks which might jeopardize the safety of their subordinates or their careers, but are not intimidated to take reasonable risks when appropriate.

The will to lead comes with both risks and rewards. True leaders take charge and take responsibility for every facet of their operation. When things go well, they point to their employees and say, “They did well.” When things don’t go so well, they take the responsibility for the failure and immediately begin to move forward despite the setback or problem. Then, they get to work once again to make the unit’s next operation successful.

Leaders are always moving forward toward their objectives and goals. Sometimes, the progress is slow and, sometimes, they suffer temporary setbacks, but their overall momentum is forward. They consistently push their units to be the best they can be and their subordinates positively respond, not because they are “ordered to,” but because they want to. When subordinates trust their boss, for all the reasons listed above, they become motivated – they want to succeed.

How often have we all heard this, but how often do some bosses fail this simple task? We all watch our supervisors and we all – consciously or subconsciously – react from what they do and how they do it. Our subordinates do the same. If you are forward thinking, innovative and professional as a leader, then your officers will likely follow your lead. Your commitment and dedication to the ideals of professional police work and the fulfillment of your unit’s mission will be infectious and your entire unit will be positively affected by your actions. True leaders are outstanding role models.

True leaders are able to visualize the goals of the unit and the steps necessary to reach those goals. They can see the path, they can follow the path and they share this vision with their subordinates. They understand the rewards of success and are prepared to deal with the inevitable stumble which may occur along the way. The leader’s vision defines the final goal and the leader’s actions define the path to that goal. But, despite the leader’s vision and understanding, they must go further. They must be able to articulate and share their vision with their subordinates. In sharing their vision, they must be able to “excite” their subordinates about working toward those goals and the associated rewards.

Although the principles of leadership are consistent across professions and throughout time, the ability to lead is an ability sought by many, but seemingly achieved by few. Being a successful leader in police work requires many skills and abilities, and leadership can be as risky as it is rewarding. However, the satisfaction of being a true leader far exceeds the safety of being a mediocre manager. Go ahead and dare to enjoy the rewards of being a successful leader throughout your police career.

Mike Carpenter has been working in the field of law enforcement in a number of different positions and assignments for more than 35 years. He has held several supervisory and administrative positions, has written several books on the topic of police leadership and supervision and has had more than 100 articles published. He is currently a professor of criminal justice at a college in upstate New Yorkand also runs a successful consulting business called Police Management Services (www.policemanagement.com). You can contact Mike at MJCarpenterX2@yahoo.com.