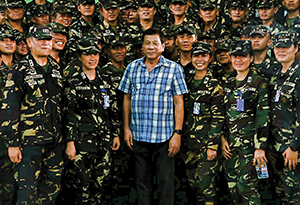 Imagine this: You’ve decided to take a vacation to take in the sights and culture of the Pacific Islands: Bora Bora, Fiji, the Phillipines. You know, places where you can relax on some Pacific shore while sipping coconut juice and, well, kill a few drug dealers.

If you haven’t heard already, Phillipine President Rodrigo Duterte, elected by a landslide vote this past June, is rather strong on crime. That’s always a good thing, right? Well, the Rod-meister has some anticrime tactics which would make Sheriff Joe Arpaio blush. You know, our American “war on crime”? He’s really got one and he’s recruited…well…everybody to be in the army to fight it. His overall goal was this: Kill 100,000 drug dealers. How? Have the public, not the police or the military, go out and kill them. I’m figuring that, like here, the drug dealers don’t wear T-shirts with “I’m Your Local Meth Dealer” on them, so how do you know for sure if who you want to gun down is really a drug dealer? It doesn’t really matter, apparently. Here’s a quote from the lovable Prez, “If you know of any addicts, go ahead and kill them.” That’s addicts, the people we are starting to say have a medical affliction and are not criminals. His prediction of 100,000 deaths was accompanied by the comment that there would be so many dead bodies dumped in Manila Bay that the fish there would grow fat on them.

It’s likely that no one has bothered to discuss something so laughable as “due process” to the 71-year-old president who has likened himself to Adolph Hitler. Concepts like that were left in the rearview mirror a long time ago. But, don’t look in your rearview mirror, buddy, because the street ahead is littered with bodies – 2,400 dead bodies in just two months, Time reported in September, as a direct result of the president’s cheery order to go out into the neighborhood with guns blazing. Yes, that’s 1200 a month, most of which were in the heavily populated areas in, and around, Manila.

One would guess that there are no gun laws, or that his sweeping permit to mow down suspected drug dealers just automatically supersedes all those. I mean it would have to, wouldn’t it?

Imagine this: A Filipino citizen gets pulled over by a Manila cop.

“Do you have any weapons in the car?”

“Why, yes, officer. I have a .40 caliber Beretta under the front seat here and a 12-gauge shotgun in the backseat.”

Is it working? Well, that depends on who you ask. Apparently, thousands of drug dealers have turned themselves in. The problem you and I concerned with is, what about the innocents who most certainly are getting caught in the crossfire? Remember, Duterte told citizens to kill anyone they thought were addicts or dealers. Ah, let’s throw in criminals in general.

“I don’t care about human rights, believe me,” Rodrigo Duterte said with a perfectly straight face.

What’s it like, I wonder, living in some quiet suburb of Manila?

Just recently, President Duterte announced that he wants all American military entities out of his country completely within two years – out. Hey, Duterte, here’s a news flash for you: In the context of history, the blood of thousands of American soldiers has barely dried on your shores from when we saved your people from outright slavery and torture at the hands of the Japanese. But, now you want us out. And, that can only mean one thing: You want no one standing in the way while you turn the Phillipines into a lawless bloodbath while you, the head butcher, stand by and get your kicks.

I found it interesting that the U.S. Department of State has issued a travel warning for American citizens, advising strongly against nonessential travel to the Phillipines, citing an “increased threat of maritime kidnappings against small boats in the vicinity of the Sulu Archipelago, and violence linked to insurgency and terrorism there.” (What a fun place!) They failed to mention the threat of your server at the café, or the taxi driver, or the little old lady riding by on her bicycle with an AK slung over her shoulder who might glance your way and mistake you for Danny the Drug Dealer. Any one of those people has been given the blessings of President Duterte to empty a magazine into you and be on their way.

“Well, hey,” we should retort back, “we’re sorry, but we’re really busy trying to fix our criminal justice system. You know, the one where you’re innocent until proven guilty and the one where you get a lawyer, even if you can’t afford one, and where you get to appeal if you get convicted, and all that stuff. Where we have grand juries made up of citizens who get to decide if the government has done a good enough job to move forward with a case against you. Terrible stuff. Broken. Don’t come here. Go to the Phillipines. You talk about freedom of expression! Woo-hoo! Manila is a place you can double tap all night and I ain’t talkin’ about beer!”

What’s going to happen with Duterte in power (besides homicide detectives making lots of overtime)?

Could it be another Stalin, Pol Pot, or Hitler who Duterte has already said he identifies with? I guess that remains to be seen. At some point, the violence will have to stop – the Asian alliance of nations which does business with each other will put some political/economic pressure, I would think, once tourism dwindles down and lots of money is at stake. What does the Prez do then? Decide that there are new public enemies and sends out new marching orders to the citizenry?

The next time someone you know talks about how horrible our country is, urge them to get a Groupon® to Manila, and tell them to make sure to get a real comfortable hotel room, preferably not on the ground floor.