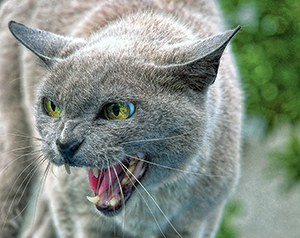 This is what happens when family pets find out they’re about to be neutered… A family in Greenfield, Wisconsin, was taken hostage in their own home by another family member. Fearing for their safety, the wife managed to sneak a quick call to 911 and police officers were dispatched to the scene. When the officers arrived, they discovered that the situation was not what they had expected. As it turns out, the family was being held hostage by the family cat who was very angry. The cat had apparently attacked the husband just before the police were called. Animal control corralled the kitty who was taken into custody for observation. (I wonder if the local shelter has a rescue program for pet owners?)

The only thing slow about this biker is his ability to think rationally… A suburban Detroit motorcyclist was apparently fast enough to leave police in the dust during a chase, but not swift enough to stop from bragging about it on Facebook. Lake Orion police say the 33-year-old Rochester Hills biker was charged with fleeing police and reckless driving. They say an officer pulled up to the man outside a restaurant after witnessing loud motorcycle maneuvers in the street. The biker sped off and the officer eventually stopped pursuing him. Police say he boasted on Facebook that he was going “140 in a 35 mph” zone. He added, “#nojailthisweekend.” Someone shared the post with police. (His next post will read, “#sothisiswhatjailislike.”)

Yabba-Dabba-Don’t!… The City of Key West, Florida, put out a call for help to find the owner of a most unusual, illegally parked vehicle – a replica of a car from “The Flintstones.” The city said it was found illegally parked without anyone around to claim it. “This Flintstone car is in front of 828 Emma Street. It is illegally parked in the public right of way. It’s been red tagged, but the city would really like to find the owner before we have to take it away. The owner has not yet come forward. Please, if you know whose it is, let them know. Please help us find the owner of this ride…QUICKLY!” a post said. (Was there a parking ticket written with a hammer and chisel on a thin piece of stone?)

Don’t try anything stupid – leave that part up to me!… After two robberies netted $4,220 from a bank in Fort Lauderdale and a credit union in Miramar, Florida, investigators desperately wanted to nab the lone female robber. They got a break when they discovered fingerprints on the second demand note which the robber had left at the scene of the crime. They matched the prints to a 27-year-old woman and a mug shot from an earlier arrest resembled a good security camera photo taken at the first robbery. The woman was apprehended at her Hollywood apartment hours after the second robbery. When police showed her the security camera photos, she circled herself in several photos and wrote “me” on them. She then signed her name. Police say the demand notes she passed to tellers started with, “Don’t try anything stupid.” (Actually, they weren’t circles; they were little hearts.)

This crook ought to be “flushed with pride” for successfully pulling this robbery off… Police in Tennessee are looking for a man who they say robbed a Nashville gas station while covering his face with toilet paper. The man reportedly entered a Twice Daily gas station just before 2:00 a.m. He then went into the bathroom, grabbed a roll of toilet paper and wrapped it around his face as he pulled out a gun and demanded money from the clerk. No other customers were at the gas station at the time of the robbery. Police are reviewing the store’s surveillance video, hoping to get a frame of the man’s face before he managed to cover it with the toilet paper. (Did this occur in the Quilted Northern® section of Nashville?)

He’s got a place in politics… A man in Boston, Massachusetts, was charged and convicted of stealing a laptop from Suffolk University Law School, where he had been a student. He was given a 90 day prison sentence, but the judge decided to go easy on him and placed him on probation for two years. Apparently, that still wasn’t good enough – the man was later charged with returning to the clerk’s office and demanding to see his verdict slip which is public record. He then allegedly swapped the “guilty” verdict slip with one he had forged and checked the “not guilty” box. Not surprisingly, the police caught the forgery and the man is now facing 20 years in prison instead of probation. (Two years’ probation versus 20 years in prison – a bold strategy indeed!)