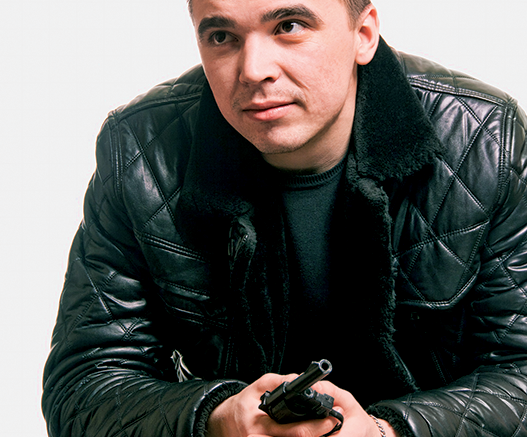 What do you call a moron who’s had too much to drink? A cab… The Oklahoma Highway Patrol said a person called in a report, saying that “there appears to be a man on the back of this truck.” It all started in Wichita when investigators say a 30-year-old man hopped on the back rail of a semitruck as it was leaving a shipping yard. He held on for 130 miles – nearly two hours – and ended up in Guthrie, Oklahoma. Kansas Department of Corrections records show that he served time for aggravated battery. Police arrested him for public intoxication and joyriding – both misdemeanor charges to which he pleaded not guilty. When troopers asked him why he was on the truck, he said he was “hoping to find his wife.” (Now, he’s “looking for love in all the wrong places.”)

May the fraud be with you… A man claiming to be a Russian astronaut in space allegedly scammed a 65-year-old Japanese woman into paying for his return trip to Earth, vowing to marry her once he landed. The man found the victim on social media. On his profile, he uploaded random photos of space and said he worked at the International Space Station where astronauts have limited access to cell service. The woman said their relationship quickly evolved into one of love. A Japanese messaging app reveals that he repeatedly said he loved her and proposed marriage. But, to actually tie the knot, he said, he first needed money to return to Earth. Believing this man would be her future fiancé, the woman paid him about 4.4 million yen (about $30,000) in five installments. But, when he kept making demands, the woman grew suspicious of his intent and reported him to the police. (Ground control to Major Con…)

When you want to be a criminal and a nice guy at the same time… A man strolled into a fast-food restaurant in Houston, Texas, and asked the person behind the counter for change for a $100 bill. When the employee called over his manager, the suspect pulled a gun and demanded cash. Then, for reasons which can only be known to a simpleton, he told the manager that it was his first time attempting a robbery. The manager seized the opportunity and simply refused to open the register. The hapless thief then proceeded to try to negotiate an amount which would be reasonable to both parties. Alas, the manager heard nothing which would sweeten the deal. The robber then left the restaurant, probably to go home and practice in front of a mirror. (As with most occupations, experience is required.)

“A woman and a raccoon walk into a bar”… A 38-year-old woman who brought a wild raccoon into a North Dakota bar during happy hour, which prompted state health officials to issue a warning about potential rabies exposure, is now facing criminal charges. The Maddock woman is charged with misdemeanor counts of providing false information to law enforcement, tampering with physical evidence and unlawful possession of furbearers. She was arrested after authorities found her and the raccoon by serving several search warrants in and around Maddock. (I once picked a cougar up in a bar; however, that story is for a different time!)

“Billy the Kid” reportedly terrorizes the local sheriff’s office… “What we’re dealing with here is a complete lack of respect for the law.” An Arizona sheriff’s office said a loose goat “terrorized” a community for hours before being apprehended. The Maricopa County Sheriff’s Office posted that the outlaw goat, which they dubbed Billy, “terrorized some residents of Tonopah” for hours by causing damage to a garage door and an electrical cord before chasing a resident around a car. “Deputies from District 2 were able to take Billy into custody, at which point he assaulted one of our deputies by urinating on them,” the post said. “Deputies charged Billy with trespassing, assault, criminal damage, and disorderly conduct,” the post joked. (He’s b-a-a-a-a-a-d to the bone!)

They should make a movie about this…call the movie “Saw.”… You may have heard of Jack the Ripper or the Taco Bell Strangler. But, now, Gresham, Oregon, is dealing with its own serial criminal…of sorts. That would be the Gresham Lumberjack. Someone is cutting down trees along the Springwater Corridor Trail – to the tune of 750 trees since August 2021. But, they’re not doing it to poach firewood; the lumberjack leaves the trees right where they fall. The cutting seems to take place at night and is carried out with a hand saw (likely because it’s quieter). The city has installed cameras along the trail, but, in the meantime, they’re asking for the public’s help in nabbing the culprit. (I can cut down a tree just by looking at it – I saw it with my own eyes!)

Thirty hours of community service cleaning up trash should do the trick… After knocking a golf ball into the Grand Canyon and appearing to lose her driver, a woman who posted a video of the episode on TikTok was charged and a court appearance has been scheduled. The incident prompted the National Park Service to post what appears to be a silly, but, apparently, a necessary question on social media: Do we really need to say, “Don’t hit golf balls into the Grand Canyon?” The woman had posted a video to her personal TikTok page showing her hitting a golf ball and throwing a golf club into the canyon near Mather Point. Public viewers of the video helped identify the individual’s social media account. The NPS went on to explain that throwing objects over the rim of the canyon is not only illegal, but can also endanger hikers and wildlife who may be below. (Also, go down there and retrieve your golf ball and club!)

First, trunk monkey. Now, this… A video of a monkey “driving” a bus landed an Indian bus driver in hot water. The driver, in the Indian state of Karnataka, was suspended after he let a monkey “drive” a bus during his watch. According to witnesses, the langur monkey boarded the bus with another passenger and decided to sit with the driver while he drove around. The driver, as well as the 30 passengers, seemed unconcerned as the monkey took control of the wheel. But, the driver’s employer took action after the video gained attention on social media. (This guy is training his replacement.)

Please provide exact details on how it was done (asking for a friend)… In what appears to be the biggest heist from a US prison, a 31-year-old Georgia inmate serving a 14 year sentence impersonated a California billionaire to steal $11 million. The inmate is accused of using unregistered cell phones to pose as a billionaire and open a false bank account in his name. He planned to acquire 6,106 American Eagle one ounce gold coins, making arrangements for $11 million to be sent from the billionaire’s Charles Schwab account to a firm in Idaho. After he moved the funds, he reportedly coordinated the use of a private plane to fly the coins to Atlanta where some of the money was used to buy a house worth $4.4 million. The incident sheds light on the corrections department’s shortcomings in stopping illegal activity, even from within its own maximum security facility. (With an aptitude for crime like that, he missed his true calling to become a politician.)

“Bored” of Education?… The Superintendent of the Baldwinsville (NY) School District was arrested for driving while intoxicated after he was observed crowd surfing in the student section at a high school football game. The Baldwinsville Police Department said the official was observed by numerous individuals in the student section of the bleachers. Several students reported that they suspected he was under the influence of alcohol and police were notified. A short time later, a Baldwinsville police officer observed him operating a vehicle without a front plate and saw him make a turn without using his turn signal. The officer pulled him over and conducted a field sobriety test. The superintendent was arrested and charged with driving while intoxicated with a blood alcohol level greater than .08% (You can’t spell Baldwinsville without DWI.)