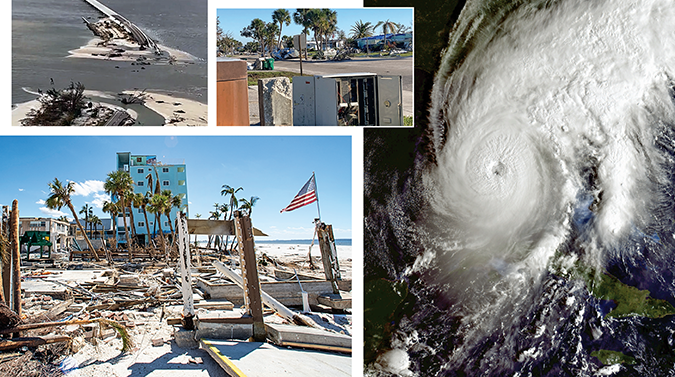 The Misery of the Aftermath

As I write this, it has been just 26 days since Hurricane Ian made landfall on Florida’s southwestern coast just north of Sanibel Island.

I spent a good deal of time in that area as a youngster. We were close friends with a family who lived in Fort Myers and we visited often. They lived right on the Caloosahatchee River which flowed across the north end of town into the Gulf of Mexico. Sanibel and Captiva are sister islands which serve as “barrier islands” to the communities of Fort Myers and nearby Port Charlotte. I have wonderful memories of catching catfish on the shores of the Caloosahatchee and snorkeling with my friends around the tip of Sanibel which, at that time, had no more than two or three buildings on it. The beaches were unspoiled and stone crabs abounded in the shallow waters.

Later in the late 70s and 80s, snowbirds from the Midwest found it a haven from the overcrowded East Coast. The town of Cape Coral bloomed next door and Fort Myers went from a sleepy southern town to a bustling retirement hotspot.

Today, the entire area is in ruins.

Hurricane Ian scoffed at the supposed “barriers” of Sanibel and Captiva. The storm surge brought a wall of Gulf water into Fort Myers from the west while the Caloosahatchee overflowed from the north. Fort Myers became completely flooded. Ian’s 155 mph winds battered the entire region, leveling the beach communities and businesses along both barrier islands, as well as the cool Margaritaville-like shops, bars and restaurants of Fort Myers Beach. You might have seen the pictures. For me, it brought back many painful memories of August 24th, 1992, when Hurricane Andrew came through the southern suburbs of Miami-Dade County like a buzz saw. It also hurt to see one of my favorite childhood playgrounds shredded and floating in a surreal suburban swampland.

Andrew was bad. A wind velocity instrument atop a building in Coral Gables recorded gusts of 168 mph before it broke off. But, Ian was a far worse storm. Andrew’s winds were more powerful, but it was a faster moving, smaller and more compact storm. The storm surge affected a small suburban area, not the wide swath that Ian, a slower moving giant, impacted. I was working in homicide at the time Andrew hit us. We had 36 storm-related deaths. Ian’s death toll is 100 more than that and there are still five people missing.

Two days after Ian left the area, I read an article in which a local government official said that recovery would take “days, maybe even weeks.” This poor man, I thought, is in for such a rude awakening. The recovery is approaching the one month mark and barely anything – except for the clearing of some roads – has been accomplished. Recovery and reoccupation of most of these areas will take the better part of a couple of years. Andrew took that long and the damage is far greater in this storm. Law enforcement personnel in Lee and Sarasota Counties are experiencing this reality now. Before you can even start thinking about rebuilding, you must clear the roads and that means bringing in heavy equipment. If you’re scratching your heads and thinking of that “chicken or the egg” dilemma, you’re right. How do you bring in the heavy equipment when some of the roads – including the causeway to Sanibel Island – have collapsed or have been washed away? Police are also grappling with looters (I hate that word – they are burglars); contaminated water; carpetbaggers coming from everywhere to prey on home and boat owners; price gouging; and, now, hordes of mosquitoes. We had all that after Andrew. My neighborhood had no electricity for three weeks and our windows were blown in. When you stepped outside, you heard a symphony of chainsaws and generators echoing for miles. After a week, every home had a large mound of debris, tree clippings and garbage (the sanitation department wasn’t picking up yet) piled high by the road. One night, trying to sleep in the unforgiving humidity, I realized we had a family of rats invading the house.

Don’t forget this problem, too, and I guarantee you it is happening just 90 minutes west of me: Police officers’ homes are also flooded or damaged so badly they cannot live in them. After Andrew, we banded together and went house to house, fixing and clearing each other’s homes so we could attend to the public. Many of us had to relocate to hotels.

Ian’s survivors – police officers included – are suffering in even worse conditions in Southwest Florida. Some areas had to wait two weeks for the water to evaporate or drain back into the Gulf and the Caloosahatchee before trying to salvage their homes. Tens of thousands of displaced residents have been frantically calling their insurance companies to get funds to start repairs. Hotels for several counties around are jam-packed with desperate families trying to figure out how to start the next chapter of their lives. A recent news story reported that approximately 70% of these people have no flood insurance. If you don’t live in Florida, you might not know that standard homeowner’s insurance policies don’t cover flooding. You need flood insurance to cover that.

I decided on this topic for this issue because Ian’s ferocity missed us by a nudge to the south. Seeing it slam into the Fort Myers area was deeply personal. The storm’s enormous size put almost the entire state in peril as it approached. We were all prepping and watching because we’ve seen this movie before. Hurricane Andrew was wobbling as it approached from the Bahamas. It pointed at West Palm Beach, then, a couple of hours later, it appeared to aim for Key West. At the last minute, Andrew straightened out and came barreling into my neighborhood. The only saving grace was that he was gone in two hours, whereas Ian cruelly, slowly battered Florida’s Gulf Coast like a piñata. Much of the area was totaled even before it made landfall.

The aftermath of these megastorms causes stress beyond imagination. Andrew ruined half of our house, but the driveway was at least dry, so I could get in and start cleaning up. The neighbor’s roof disintegrated and destroyed the eastern facing windows of our master bedroom and the wind came through and blew the south facing window out into the backyard. Most of the belongings I had in our master bedroom were later found at the bottom of the pool once we drained it. When I went out to the highway three days after the storm, there were people in the median of US 1 selling chainsaws, generators and water – for $5 a gallon! And people were buying it.

Something happened to us after Andrew: We all banded together to help each other. Neighbors who had never even known each other were sharing ladders, tools, gas, and stories. I suspect the same thing is happening on the other side of the state. But, they need help. Please check your local Red Cross centers and other help organizations to see what you can do. I honestly think that just about anything would help now: blankets, propane, clothes, bug spray, water, batteries, canned food, diapers, and other daily stuff we take for granted. Because, for many, all of that – and much more – is all gone.

What these folks do not need is to be forgotten.