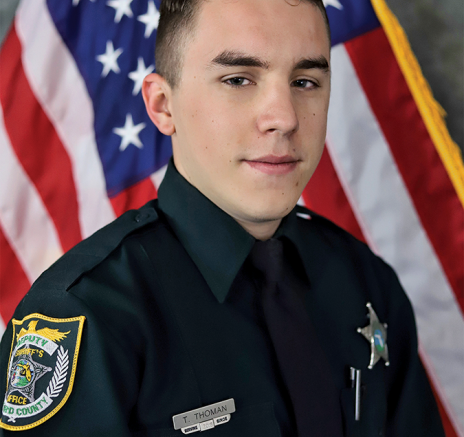 On Monday, August 30th, 2021, at approximately 1:08 p.m. deputies of the Brevard County, Florida, Sheriff’s Office were conducting a joint operation with members of the United States Border Patrol in an interdiction operation along Interstate 95 in Brevard County.

During this time, Brevard County Deputy Tyler Thoman conducted a traffic stop for a broken tail light on a vehicle near the intersection of Highway 192 and Columbia Lane in West Melbourne, Florida.

During the course of the traffic stop, the driver, who did not have in his possession a driver’s license, was asked to step from the vehicle. Deputy Thoman also requested another deputy to assist him at the scene.

Brevard County Deputy Brian Potters responded to assist and parked his marked patrol vehicle to the right of Deputy Thoman’svehicle.

As the subject exited the vehicle, he produced a short barreled AR-15 style rifle and began to fire at the deputies, with the deputies defending themselves with their pistols. During this gunfight, Deputy Potters suffered a gunshot wound to his left ankle and the suspect was wounded in the leg. The deputies sought cover behind Deputy Thoman’s patrol vehicle and had lost sight of the suspect when they moved to cover.

The suspect, a career criminal with over 40 previous arrests, including 23 violent felonies, was out on bond for two felony drug charges and had two felony warrants outstanding, when the incident occurred. He was also using a rifle which had been stolen from a local jurisdiction in the county. The suspect died from his injuries.

Deputy Potters had multiple jaw fractures, a fractured orbital socket, as well as lacerations to his head, and underwent surgery for the gunshot wound. He has recovered from his injuries.

Deputy Tyler Thoman exhibited exceptional bravery and courage while facing the armed violent suspect and Deputy Thoman’s actions not only saved his own life, but the life of fellow Deputy Potters. As such, it is with great honor and pride that the National Rifle Association names Deputy Tyler Thoman as the 2021 NRA Law Enforcement Officer of the Year!

A video of the incident has been released by the Brevard County Sheriff’s Office which can be viewed on YouTube at https://tinyurl.com/zxmjpu36