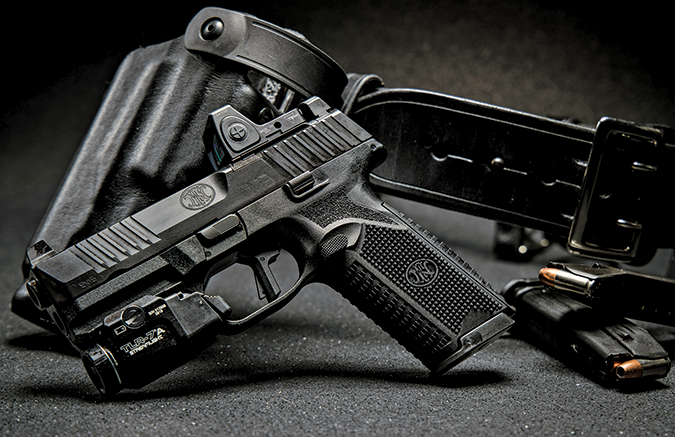 When I heard the LAPD had selected FN’s newest offering, I couldn’t wait to get my hands on this new handgun and jumped at the opportunity to put it through its paces.

Back when I started my career as a police officer, my first department issued patrol rifle was a well-worn FN FAL. I put thousands of rounds through the rifle in my attempts to impress the department rangemaster enough to send me to firearms instructor school. Ever since, I’ve had a soft spot in my heart for FN firearms.

FN America, LLC is a US subsidiary of FN Herstal, S.A., a leader in the development and manufacturing of high quality firearms for military, law enforcement and commercial customers worldwide. As a matter of fact, the FAL is historically one of the most widely used rifles and has been used by more than 90 countries. FN also currently produces the FN 15® series of modern sporting rifles for US consumers and law enforcement, as well as the M4/M4A1 carbines; M16 rifles; MK46, MK48, and M240 machine guns; and the MK19 grenade launcher for the US military. To say the company has a history making military grade firearms is an understatement.

According to the company’s literature, the FN 509 MRD-LE delivers more precision and versatility than any other duty-rated handgun. It’s manufactured at the company’s production facility in Columbia, SC, and is built on the proven FN 509 lineup, with some exclusive upgrades for law enforcement. Making up the new high performance package is a conical striker and a flat-faced, duty-rated trigger which combine for outstanding accuracy from a striker-fired handgun.

The first thing I noticed about this handgun is the aggressive grip texture. It felt good in my hand without being overly abrasive. A close examination of the grip shows four different types of texture along the backstrap, front strap, side panels, and below the slide stop lever. The value of a positive grip on a handgun cannot be overstated. Combined with the interchangeable backstraps, I was able to get this pistol to fit me perfectly. Even with sweaty hands, I was able to keep this pistol planted firmly in my grip during combative speed drills.

Following the grip texture, the second-best feature of the frame is the magazine cutouts in the bottom of the grip. These cutouts make stripping a stuck magazine quick and easy. I have added this enhancement to several of my personally owned handguns and find this feature is a great upgrade. Especially when clearing malfunctions, these can help the shooter diagnose and fix problems quickly. Speaking of magazines, the FN 509 MRD-LE comes with three 17 round steel magazines with a high visibility follower.

When you pick up the FN 509 MRD-LE, you’ll notice it’s built like a tank. The slide is thick, stout and feels substantial. This handgun feels extremely well built for a 9mm leading me to believe it should be dependable and durable over the course of any law enforcement officer’s career. In fact, the FN 509 platform has proven to be reliable and has been tested beyond the million round mark using a wide variety of training and duty ammunition. The hefty slide has a sturdy external extractor with a loaded chamber indicator providing visual and tactile feedback to indicate a loaded round.

Another nice touch on the FN 509 MRD-LE slide are well-placed and designed front and back cocking serrations which are suitably aggressive. I grew to appreciate the aggressiveness of the cocking serrations, especially with wet or gloved hands. They aided in working the slide, conducting press checks, loading, unloading, and doing malfunction drills. Additionally, the slide stop lever is fully ambidextrous and guarded by a frame cutout on each side to help prevent accidental interference with the shooter’s hands during firing. This is a common problem for some shooters whose grip consistently depresses the slide stop lever causing the slide to fail to lock back when empty. Other shooters can have their grip interfere by inadvertently pressing up on the slide stop lever causing the slide to lock back on a full magazine. Either way, this can be problematic. However, this shouldn’t be a common problem with the design of this handgun.

After giving it a once-over, I checked the owner’s manual and lubed it as directed. I paired the FN 509 MRD-LE with a DeSantis® Cazzuto™ KYDEX® holster which included a belt slot and paddle attachment. Together with a DeSantis Quantico™ double mag pouch, this is a setup any plainclothes detective would be pleased to carry daily. In fact, this was the exact setup I used to instruct two pistol mounted optics instructor courses, a handgun instructor certification course, and an advanced firearm instructor course. It was comfortable and provided lightning fast draws and reloads from a concealable holster and mag pouch.

On the range, I found the FN 509 MRD-LE to be as accurate as any of the currently available duty handguns. In fact, I don’t think I’m going out on a limb saying the FN 509 MRD-LE is the most accurate factory duty handgun I’ve ever tested. I’m not one to put a handgun in a vice and shoot it from 25 yards to test its mechanical accuracy. (I find this tedious and boring.) Instead, I’m more interested in seeing if a duty gun can maintain good accuracy running at combative speed with a variety of ammunition and still be reliable and dependable. Call it “minute-of-bad-guy,” or whatever, but most quality duty handguns on the market can shoot more accurately than me. However, this one really got my attention with consistent groups like the ones in the accompanying photo. The 25 yard group was shot braced over the top of a plastic barrel and the other groups were shot two-handed while standing. This was better than I typically do with any of my other duty handguns.

The 509’s cold hammer forged stainless steel barrel (with a recessed target crown) helped ensure better than normal accuracy on steel targets at distances beyond 50 yards. The smooth flat-faced trigger compliments the sight picture with a positive wall followed by a crisp, clean break which will improve accuracy for many officers. It ran reliably with a mixture of 115-, 124- and 147-grain ammunition including training and duty ammunition. Even with magazines containing a mixture of ammunition weight and bullet types, the FN 509 MRD-LE ran without a single hiccup.

During this evaluation, I used the FN 509 MRD-LE on my home range, during several classes and during practice sessions. I ran it hard and fast to see if it could stand up to abuse and tested it for accuracy to see if it lived up to its precision standards even when dirty. It never disappointed me. In fact, the only malfunction drills I did with this handgun occurred when I intentionally set them up during testing or classes. Even though I’ve only had the FN 509 MRD-LE for a couple of months, my scores on several different timed courses of fire are the same as handguns which I’ve had for years.

The FN 509 MRD-LE is everything law enforcement officers are looking for in a duty gun: reliable and durable and accurate and easy to shoot well. The new handgun will definitely help FN continue to carry on the tradition of producing high quality, battle-proven firearms for military and law enforcement customers worldwide.

Sgt. Todd Fletcher (ret.) has over 25 years of law enforcement experience with assignments to patrol, criminal investigations and training. He has presented instructor development training nationwide and at multiple regional, national and international training conferences. He owns Combative Firearms Training, LLC which provides firearms training and instructor development classes to law enforcement, military and private security. Todd was awarded the 2022 ILEETA Trainer-of-the-Year award. He can be contacted at todd@combativefirearms.com.