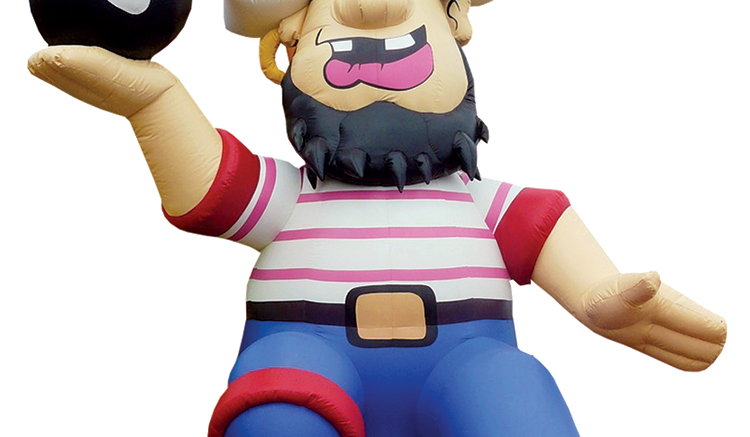 It was an emotional support doll… A general superintendent for the MTA in New York City was caught keeping a blow up doll in the front seat of his car. He swears it’s to keep him company, but many believe it’s to get around HOV traffic laws. The official pulled up to the office with an interesting passenger beside him. People immediately questioned why a blow up doll wearing a suit was in the car. When asked if he was using the inflatable for illegal purposes, he replied, “I don’t use it for the HOV; I use it for the company. Have I ever lied to you?” This year, he’s gotten two parking violations, both for driving without a front license plate, and recent pictures of him with his doll reveal that the plate is still missing. (I would rather admit to cheating the HOV lane requirements than having a blow up doll “for company.”)

Do I have to itemize my stolen property?… Did you steal anything in 2021? Did you take a bribe? If you did, the IRS wants you to report it on your taxes. The requirements can be found at IRS.gov amid other missives to report income earned from jobs in the “gig economy” and what to do about taxable alimony payments. “If you steal property, you must report its fair market value in your income in the year you steal it unless you return it to its rightful owner in the same year,” read the provision for stolen property. What if you dealt drugs or engaged in other crimes? The IRS publication says to note your earnings on Schedule 1 of your 1040 form, “or on schedule C … if from your self-employment activity.” And, don’t forget to report any bribes or kickbacks you took in the course of doing business. They must also be reported on Schedule 1 or Schedule C. (Does it go both ways? Can I get a tax exemption on property stolen from me?)

Technically speaking, they got their cash back right away… Delaware State Police reported that a 44-year-old man robbed a New Castle County bank and then tried to deposit the cash using the ATM outside the bank. State police arrested the accused after they say he robbed a Wells Fargo bank. The accused reportedly handed a teller a note saying he was robbing the bank. The 25-year-old woman then handed over an undisclosed amount of cash and the accused left the bank. “The suspect fled the bank on foot and, once outside, he made a deposit in the ATM on the exterior of the building,” state police said. The man then tried to hide behind a shopping center where state troopers caught up to him and arrested him. (He probably was trying to avoid one of those overdraft fees.)

This should re-kindle their passion… Neighbors in Cajeme, Sonora, Mexico, called the police to report a domestic disturbance. When officers arrived, they found a woman holding a knife which she had used to attack her husband. The husband was not seriously injured and he was able to explain to the police exactly what had transpired. He said his jealous wife had been going through his phone when she found a picture of him in a compromising position with a younger woman. He said she then flew into a rage and attacked him with the knife before he could explain what she was looking at. Yes, the picture was indeed of him, but it had been taken several years ago. And the young woman? It was none other than the wife herself. He told police that the photo had been taken “back when she used to take care of herself.” Yep, she didn’t recognize herself. She is now facing assault charges. (If they ever bring back “Tales of the Unexpected,” we have an episode right here.)

You’ll never guess what Crystal Methvin was arrested for… A 40-year-old Florida woman’s name recently made for an interesting police report in St. Augustine, especially since her name matched the crime she’s accused of committing. Crystal June Methvin was taken into custody after being charged with possession of crystal meth, according to the St. Augustine Police Department. She was arrested after officers received a tip that a woman was sitting in a car on the side of a local highway. When police arrived, she only had a Florida ID card and didn’t have her driver’s license. When officers searched the car, they reportedly discovered crystal meth in a plastic bag in her purse. More unused plastic bags were allegedly found in Methvin’s purse, leading police to believe she was selling the drugs. (The arresting officer’s name was Hans Upp…)

The bad part about bragging that you think like a criminal is…criminals are stupid… A 39-year-old former Pittsburgh defense lawyer who had boasted in a quirky online ad that he thinks “like a criminal” admitted that he is, in fact, just that. The former defense attorney pleaded guilty to conspiring to distribute 100 kilograms or more of marijuana and possession of marijuana following an investigation by an FBI task force. He admitted that his apartment was a stash house and base of operations for the drug trafficking network. He had made headlines around the globe with an in-your-face YouTube ad which featured his pals pretending to commit crimes and with him asking, “Need a criminal defense lawyer? Then you should hire a lawyer who thinks like a criminal.” (He brings new meaning to truth in advertising.)

He fought the lawn and the lawn won… In Hawaii, police say a man accused of arson chose a bizarre method to flee the scene and it was all captured on camera. A local TV station reports that the man allegedly set a fire which triggered a brush fire in North Kona. The suspect then used an automatic push lawnmower to get away, zooming past bumper-to-bumper traffic under the curious stares of onlookers stuck in traffic. The man was subsequently arrested for the theft of the lawnmower which was reported as stolen. He was riding the mower at the time of his arrest,” police added. (His bold escape tactic just didn’t “cut” it.)