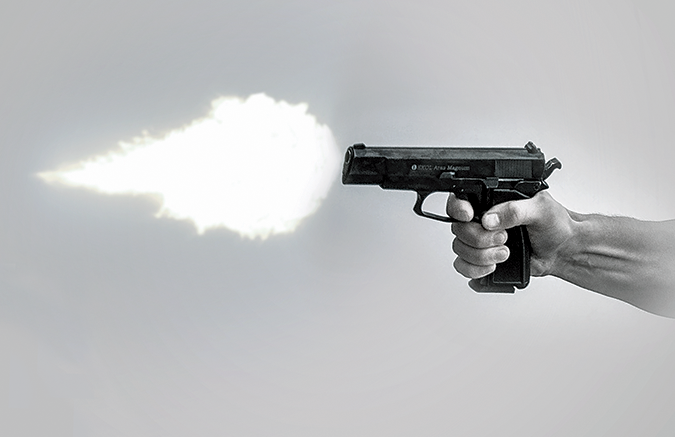 The firearm you carry on your hip is a handgun, not a hand(s)gun. It was originally designed and built to be shot with one hand.

I know what you’re thinking, “Two hands are better than one,” and you’re absolutely correct, but one-handed shooting is always going to be faster. If you have the opportunity, go ahead and use two hands for your grip. It’s certainly going to be more stable, but chances are you’re not going to have that kind of time in an actual gunfight.

The vast majority of Officer Involved Shootings (OIS) are over in a matter of seconds. Most times, according to FBI research, the offender fired first. If you really sit down and think about it, how many of the videos you’ve seen recently where the subject was armed with a firearm did the offender fire first? If you look at the recent rash of ambush-style attacks against law enforcement, this is almost always the case.

This puts us behind the curve because we’re always reacting to the threat or to the action versus the suspects who are causing the “action.” Remember, action is always faster than reaction. There’s always going to be that time gap. You can lessen the gap by doing certain things, like moving, which causes the suspect to react to your action. You can also lessen that reaction gap by getting your firearm out of your holster as quickly as possible.

Some of you are probably thinking back to your academy training where the Firearms Instructor (FI) walked you through the “steps of the draw.” You’re probably remembering the part where the FI told you to “draw your handgun out and bring it over to the centerline of your body while, at the same time, bringing your off hand to the centerline of your body to get a two-handed grip.” The FI might have then said something like this, “If done correctly, it should take no more time to get a two-handed grip than a one-handed grip.”

That may be true in a perfect world, but when was the last time law enforcement ever worked in a “perfect world”? I’ll pause here while you laugh that one out…. Seriously, though, a “perfect world” is not the environment we work in or, for that matter, live in. Suppose your off hand is busy doing something like holding a flashlight, opening a door or holding onto a railing in a stairwell so that you don’t trip over the garbage on the stairs.

Since we don’t live in a perfect world where it seems like we’re always behind in the action versus reaction curve, and given the fact that our off hands are sometimes busy with other tasks, and one-handed shooting is always faster than two hands, then shouldn’t we be training in one-handed shooting skills?

Here’s another consideration. When your startle response – or what’s commonly called your fight or flight response – kicks in, all that fancy stuff you learned at the academy or read in a magazine goes right out the window. Your focus – and your only concern – is going to boil down to one goal and that is to get your gun out of your holster as fast as you can. With the real possibility of the bad guy already shooting at you, there’s a good chance you’re not even going to be thinking about getting your off hand into place for a two-handed grip.

I can already hear the FI’s grumbling, “Muscle memory – fall back on your training. Because you trained this way, you’ll subconsciously revert back to the way you were trained”…blah, blah, blah. If that was the case, then why do most officers in the majority of OISs shoot with one hand? I can guarantee you that not all of these departments train extensively in one-handed shooting skills. These days, you’re lucky to get enough training time and money – let alone the ammo – to do anything other than “qualify,” if your state even requires a mandatory qualification every year.

This whole “defund the police” movement has pretty much killed training other than the mandatory training – and even that’s in jeopardy. “We want better trained cops” is the cry we hear. Yet, we all know the first thing to get cut in the budget is training. Learning to shoot with one hand is an extremely important skill you need to master for all of the reasons we’ve already laid out. Because of this, don’t be afraid to invest in your own safety and well-being. Ask your spouse or loved ones if your life is worth a couple of boxes of ammo to learn this skill. I think we all know the answer to that one.

This brings us to the easy part – learning how to shoot with one hand. It’s a lot easier than you think. It’s easy because we’re working off of the basic skills you already possess. Remember that two-handed grip you learned all the way back in the academy? Well, we’re going to be using that to start.

Get your hands on a red/blue training gun or, if that’s not possible, insure you have a safe and empty firearm before starting this training.

Take your red/blue gun or safe and empty firearm and get a good two-handed grip in the low ready position. If you look down at your gun, you’ll realize the firearm is located in the middle or on the centerline of your body. This is a natural index for you.

Keep your two-handed grip on the gun and raise it up on target. The gun is still indexed on the centerline of your body. Do this up and down motion several times with your two-handed grip. Once you get the feel for this, raise your gun up on target and hold it there. Now, take your off hand away and put it out to your side for balance.

Once you’ve done this, keep the gun on target and bring your off hand over to the gun. The gun should not have moved. If it did, then you moved it off the centerline of your body. Practice this up and down, taking the off hand away and then bringing it back to a two-handed grip, several times until the gun doesn’t move when it’s on target.

This is where having a training partner can really help, as he/she can watch your movements while you can focus on the task at hand. It’s a lot easier for your training partner to see what’s going on and to assist you in correcting any issues you may be having.

Continue to go back and forth from one to two hands until you feel comfortable enough to move onto live fire. Initially, start with shooting one round at a time. You can start off with one hand, or you can start with a two-handed grip and then take your off hand away to insure you’re staying on the centerline of your body. Go from one round to two rounds to multiple rounds, shooting them all with a one-handed grip.

Once you feel comfortable with that, move back a couple of feet and go through the whole sequence again, shooting one round, two rounds and then multiple rounds. Keep doing this, moving back a couple of feet at a time until you get out to the seven yard line. Since the majority of officer involved shootings occur at 21 feet and closer, there’s really no need to train with one-handed shooting skills out past seven yards.

If you have any inclination at all to anticipate the recoil of the firearm, they’re going to show up even more with one-handed shooting, and even more the further back you get from the target, but that’s an issue which can be easily corrected by using the Ball and Dummy Drill (Google the name of this drill for more info).

This is a basic tactic, or skill, which every officer working the street needs to possess and it should be taught in the academy and reinforced throughout the officer’s career with in service firearms training. Once you have this basic one-handed shooting technique in your tactical toolbox, then you can move onto other one-handed shooting skills like hip shooting and other close quarters shooting techniques.

Be safe; watch you and your partner’s six; and, remember, it’s a handgun, not a hand(s)gun.

Michael T. Rayburn has been involved in law enforcement since 1977 and is the author of five books. He is a former Adjunct Instructor for the Smith & Wesson Academy and is the owner of Rayburn Law Enforcement Training. He can be reached at combatgunfighting.com