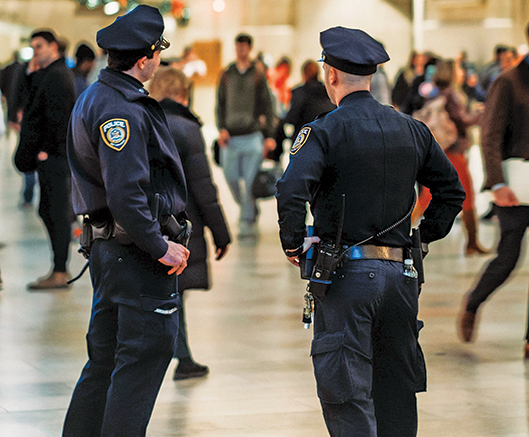 About five years ago, while teaching a class in Las Vegas, I overheard an off-the-cuff comment which has stuck with me since that time.

We had just finished cleaning up after class and I approached a group of officers readying to take the range. They were standing around talking, prepping gear and making sure they had all signed in for the evening’s training session. Just being friendly, I asked one of the more “veteran” guys if he was qualifying or if he was at the range to do some type of firearms training. He responded, “We’re just patrol officers doing our quarterly qualifications.” I’m not sure he meant it the way it came out, but his answer struck me as being overly self-critical and disparaging.

He said it as if they were a group of nobodies. There was no pride in his voice and no excitement for being on the range with the opportunity to shoot OPA (Other People’s Ammunition). This officer was older and mostly carried himself as if he was a leader or supervisor of the group. I mentioned to him that no one is “just” a patrol officer. It’s the whole reason law enforcement exists. Patrol officers serve as the foundation of everything we do in this noble profession. His response was equally as striking as his initial statement, “It’s just the way we’re treated.”

I don’t know if this guy was a supervisor or not and it doesn’t really matter. Regardless, he was the oldest person in the group and should have taken a leadership and mentoring role for the younger troops around him. His response minimized his own contributions to our profession. Worse yet, he was failing to recognize the important work those young officers do every day.

Supervisors should treat our officers as if they are the single most important group in our departments. Sergeants should advocate for their officers as much as they advocate for their agency. In my career, more than once, I raised the ire of my bosses by advocating for my officers over the department. First-line supervisors should seek training opportunities for officers; be open and flexible to new approaches to solving problems; and provide officers leadership and mentorship opportunities to prepare them to be instructors and supervisors later in their careers. If officers feel they get the short end of the stick when it comes to these opportunities, then, Sarge, I blame you. Be proud of your troops and get them what they need to be successful. You won’t be able to get them everything, but it shouldn’t prevent you from trying.

As instructors, the single most important group we train are the field level law enforcement officers. The days of only doing high-speed low drag training with SWAT officers should be long gone. Field level law enforcement officers are the tip of the spear. They are the first to the scene and first to the fight. They need the equipment, tactics and training to deploy effectively and save lives. Detectives, SWAT and other specialized units may respond to some in progress calls, but our road troops are responding to ALL in progress calls. They are the ones who need the best training and preparation you can provide.

If instructors set their expectations low and train to the lowest common denominator, then their students will likely meet only those low expectations. If you train them to just meet minimum standards, you are contributing to a decline in the level of professionalism at your department. We need to train with increasingly high expectations. Law enforcement officers will work to meet those harder standards. As Brian Willis from Winning Mind Training once said, “When you accept the role of a trainer, you also accept the responsibility that comes with it.” Take ownership in your training programs and get them the training they need to be successful.

This may be the group of leaders our more experienced gentleman was talking about when he said, “It’s just the way we’re treated.” By now, you probably know where I’m going with this article. Too much time and energy are wasted on special projects taking personnel and resources away from our core function. Some of these projects are important and need to be addressed.  Some of these are done for political reasons to satisfy certain special interest groups. We all know this is part of the game. However, if these projects are routinely undertaken at the expense of our field level law enforcement officers, how do you think they feel about their role in our departments?

The folks in the field who are working their butts off every day, every night, every holiday, and every child’s birthday are the future leaders and trainers of our departments. They are the ones making traffic stops, responding to domestics, interacting with business owners, and are the first to every crime scene. They make more public contacts in one day than the command staff makes in a month. They are the ones the voters remember when it’s time to pass a funding measure to hire more officers, get better equipment and construct new buildings. Take ownership in your officers and get them what they need to be successful.

This is the frontline group which confronts evil, delivers comfort to a crying child, and administers CPR while trying to keep someone alive. These people are the sharp end of the spear who will step in front of a knife or bullet to save someone they’ve never met.

This is also the group of people I am most proud to have served. It takes a person with perseverance and strength of character to work through the hiring process to get to this point. From the time they decided to answer the call to serve until the day they made it out on patrol on their own, every step of the way was another test of their character, integrity, work ethic, and ability to adapt to an ever changing environment. It starts with a simple job application, but then gets complicated. Written tests, physical agility tests, interviews, oral boards, executive interviews, psychological evaluations, medical tests, and background investigations are hurdles even before being hired. At this point, the solemn oath of office is sworn and the law enforcement code of ethics is reviewed and signed. The rigors, boredom, tests, drills, and struggles through basic academy are real. This culminates in a field training program where every move you make, every word you utter, and every sentence you write is critiqued by a veteran officer. All of this effort results in the most important position in law enforcement.

Considering the current media and political environment surrounding our profession, maybe it’s time to reevaluate why we do what we do and how we view ourselves. Law enforcement is the reason society can sleep comfortably knowing their families are safe. Wearing the badge should be one of the greatest honors of your life. You have sworn to serve and protect your communities and bear the weight of that promise. Be proud of how you got where you are and be proud of your work. Hold your head high as an honorable professional.

Sgt. Todd Fletcher (ret.) has over 25 years of law enforcement experience, with assignments to patrol, criminal investigations and training. He has presented instructor development training nationwide and at multiple regional, national and international training conferences. He owns Combative Firearms Training, LLC which provides firearms training and instructor development classes to law enforcement, military, private security, and armed citizens. He can be contacted at todd@combativefirearms.com.