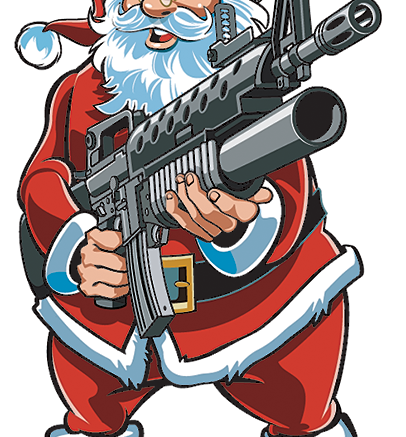 Oh, the weather outside is frightful and Santa’s carrying his patrol rifle… In Riverside, California, three men allegedly tried to steal a car at the local mall during a police undercover operation. “Two of the men saw the detective and ran off,” said a police spokesman. As officers swooped in, one yelled, “Get him, Santa!” Sure enough, St. Nick came running and tackled one of the suspects, backed up by a man dressed in an elf suit. It turns out that both were undercover officers. One suspect was totally perplexed at being held at gunpoint by the man wearing a green jacket, bright red pants, and red and white striped stockings. The team made several other arrests, including a shoplifting ring which “targets” Target stores. “We worked inside the store,” said a detective, “identified shoplifters and, when they split the scene, Santa was there to take them into custody.” (You better not rob, you better be nice, or else Santa Claus will put you on ice.)

All my rowdy friends are coming over tonight… Three Metro-North Railroad employees were suspended without pay for turning a storage room under New York City’s Grand Central Terminal into a man cave, complete with a television, refrigerator, microwave, and futon couch, according to the Metropolitan Transportation Authority. Sources said investigators had found the space after receiving an anonymous tip that the three – a wireman, a carpenter foreman and an electrical foreman – had built a secret room where they would “hang out and get drunk and party.” (Someone was upset because they weren’t given the secret knock.)

I wonder how easy it is to legally change one’s name from “Geneus” to “Idyot”?… A car with a 30-year-old man riding inside whose last name is “Geneus” was recently pulled over in Port St. Lucie, Florida, in the early morning hours. Police said that Geneus told the officer that the bags of brown and white substances found in his backpack were baking supplies – “sugar and a bag of cornstarch to bake a cake.” Geneus, who had an outstanding warrant, was taken into custody and the contents of both bags tested positive for molly (ecstasy). While at the jail, Geneus dropped another bag of white powder which tested positive for meth. He was charged with trafficking phenethylamines. (Good golly, it’s molly!)

Kind of like prison wine, but more upscale!… In Alabama, authorities say a large amount of wine and other evidence was seized at the Rainsville Waste Water Treatment Plant. DeKalb County investigators say they uncovered a large illegal winery operating there at the facility. Acting on an anonymous tip, agents and investigators located a large amount of illegal alcohol and a winery which appeared to have been in operation for a long period of time. A 62-year-old supervisor at the plant was arrested on a misdemeanor charge of possession of an illegally manufactured alcoholic beverage and a felony charge of using his official position for personal gain. (Schidt’s Creek wine, anyone?)

“Okay, so where’s the stuffing, cranberry sauce and pumpkin pie?”… In Milwaukee, a suspect stole a man’s car tire and left the vehicle propped on top of a frozen turkey. “I’ve never seen anything like this before,” the victim told reporters. “I heard of people putting bricks under a wheel, but I’ve never heard of a turkey underneath.” He addressed the tire thief, saying, “I hope you enjoy that tire because you could have given that turkey to somebody who really needed it.” He said he filed a police report and expects it will cost $600 to repair the car. (That’s a fowl act.)

I see that you’ve found the Addam’s family summer vacation house… There is a house for sale in Guildhall, Vermont, which has four bedrooms, two bathrooms, an updated kitchen, and seven jail cells – complete with barred windows, toilets and cots. The property, listed for $149,000, used to serve as the Essex County jail, with the jailer’s quarters attached to the back of the “house.” Abandoned since 1969, the cells are now covered in dust and, according to the listing, are just waiting for a creative buyer to “bring…ideas on what this 28-foot-by-40-foot wing could be!” (It’s great for when the kids need a “time out.”)

Home Alone 5: Escape from New York!… Police said a 12-year-old boy and his seven-year-old female cousin jumped into the boy’s parents’ Range Rover in Queens, New York, and embarked on a drive across state lines which lasted more than 100 miles. The 12-year-old was behind the wheel for five hours, making it to the Delaware border. At one point, state troopers caught up with them, but the children sped away. Police didn’t follow at high speeds for the safety of the children. The 12-year-old also tried to buy cookies using his dad’s credit card at a rest stop near New Jersey’s border with Delaware. The girl said the trip was fun, but added that she had wished she could have driven. A local TV station reported that no one was hurt in the incident. (This 12-year-old seems to have better driving skills than most adult drivers in New York.)

It was a good plan until her slovenly appearance and lack of credentials came into play… A 47-year-old woman’s supposed plan to garner free food at a Chick-fil-A® in Rockmart, Georgia, ended in her arrest on charges of impersonating a public officer. Police say the Dallas (GA) woman had repeatedly visited the restaurant, telling workers she was an FBI agent and threatened to arrest them if they didn’t serve her a complimentary meal. The woman’s arrest report states that, when confronted by police, the woman maintained her little charade, telling arresting officers that her credentials were electronic and talking “into her shirt like she was talking into a radio.” The Rockmart police chief said in a statement to news outlets, “You will not hear a real officer demand a meal anywhere.” (Talk about deep cover…)