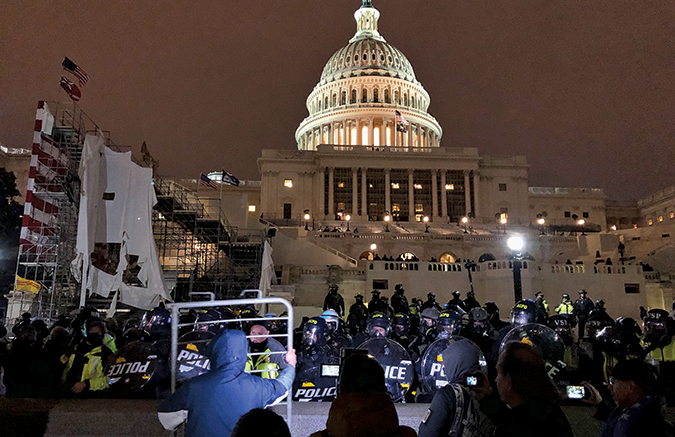 This column is dedicated to the memories of Officer Brian Sicknick, Officer Jeffrey Smith and Officer Howard Liebengood. Rest in peace, brave warriors.

Nightmare scenario, perfect storm…whatever phrase you want to ascribe to January 6th, 2021, it probably doesn’t suffice in expressing the trauma, fear, stress, and downright desperation our brothers and sisters in blue suffered at the hands of the raging, violent mob which attacked our capitol building that day.

It was the ultimate police brutality. Only we were the ones being brutalized. The attack on our country started with an attack on the police.

If you are familiar with this column, you know I don’t go down political rabbit holes. I will not do so now. This column, like all the others I have written for the past three plus decades, always comes from a police perspective. Because the reality is that, while most police officers in this nation are probably on the conservative side, and probably on the Republican side, there are also many Democrats – and even liberals – who wear the uniform and work alongside you. We are an institution made up of our communities. We are black, brown, gay, straight, religious, atheist, and everything else we find in the ranks of our citizens.

When we are attacked, however, our response is almost always: We are the police. You can’t have an orderly society – a society of laws – without us. Whether that attack comes from a journalist’s pen or a metal pole, we lock our arms and defend our own. At that point, we don’t worry about what any of us does when we get home, nor does it matter who is doing the attacking.

A funny scene in My Cousin Vinny portrays actress Marissa Tomei being appalled at Vinny fretting over what to wear to go deer hunting. She hilariously describes the deer getting its head blown off and then says, “Would you give a f### what kind of pants the sonofabitch who shot you was wearing?”

And that’s us, isn’t it? At the time we are being attacked, we don’t care who you are or what you stand for. There’s no time for that; there is only time to try and survive. We don’t give a damn what your ideology is or what point you’re trying to make. You could be a lone whacko with an AR-15, or a drunken idiot with a barstool, or a mental patient with a knife. You’re going to get the same response from us, regardless. You could be decked out in Antifa gear or you could be waving a Confederate flag. Don’t attack police officers.

We don’t care what the sonofabitch is wearing.

In the immediate aftermath of the January 6th attack, the media screeched about how “different” the police response was from BLM protests around the country. Once the videos came out, however, those voices went silent. Scene after scene showed police officers, so heavily outnumbered it was heartbreaking, trying to do the impossible. They desperately tried to keep thin barriers in place. There were multiple scenes showing a line of 12 or 15 officers trying to push back and swat away thousands of attackers who threw metal poles, threw punches and sprayed tear gas. And, somewhere in the chaos, Brian Sicknick was overwhelmed, stomped and beaten.

Inside the capitol building, the hand-to-hand combat continued to rage. Scores more officers would end up in the hospital – I believe the number was around 140 – and two more would later take their own lives, unable to fight off whatever battle must have continued in their souls.

One officer, in a now well-known interview, talked about how he heard rioters talking about getting his gun away from him and killing him. He pleaded with them and told them he had a family. Though he was grateful for the ones who circled and ultimately shielded him from further harm, his anger that any of it happened was palpable.

I know that you have done what I’ve done more than a few times: Your mind has imagined being one of those officers. Maybe, like me, you’ve stood in a line in your riot gear and faced an anarchist mob. During the FTAA protests in Miami in 2003, hundreds of us trained for the coming November Free Trade of the Americas Summit being hosted downtown. We had seen what the Black Bloc and other lunatics had done in other cities around the country and the world, and our civic leaders here in south Florida decided we weren’t going to have it. We expected the worst and it never came because those protestors saw us form up, looked at us and decided it wasn’t worth trying. We looked formidable – and we were. The riot simulations we conducted in the weeks previous to the event were the toughest and most exhausting I’ve been through in my police career. The training coordinators made it so real that we had a few real fights break out. We went home sore and tired. When it was game time, we were more than ready.

I’m not going to get involved in criticizing the law enforcement leadership. That’s another rabbit hole I’m not informed enough to travel down. The bottom line is that the preparation and presence was not enough; that much we can all agree on because what unfolded proved it. It must never happen again. We must never again assume that a potentially volatile situation won’t really get volatile. This doesn’t happen here. It happens in Third World banana republics and despotic regimes. We decided 245 years ago that we were going to be a nation of dignity and fairness. We can never get that close to this kind of anarchy again. And we, brothers and sisters, can never be punching bags and targets of death for any kind of insurrection, for any mob, with any kind of destruction planned for our country and its principles.

Those officers who fought so hard and so valiantly made my heart swell with pride when I watched those desperate scenes and imagined what they were going through while they were getting jabbed, beaten, showered with debris, and crushed. I wanted to be young again and be right there beside them. They literally defended freedom and they all deserve every commendation there is.

We don’t care what you’re wearing.