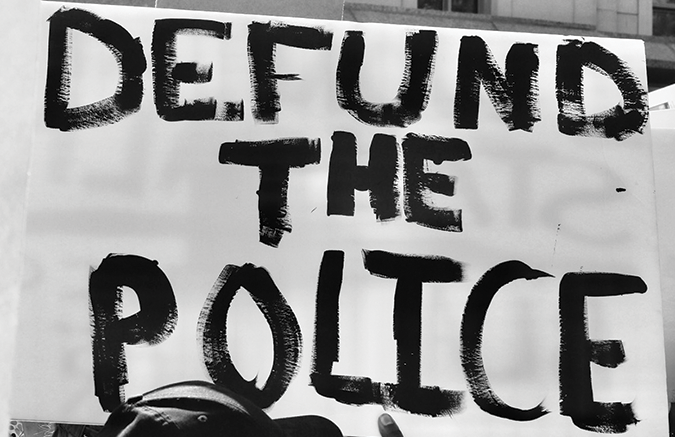 In case you were wondering what kinds of idiots want to defund the police… In Illinois, a Virgil man contacted the Kane County Sheriff’s Office to let them know that his “DEFUND THE POLICE” sign had been stolen from his front yard where it was posted. Deputies diligently applied their detective skills in locating the culprit and the stolen sign. Witnesses gave them enough clues to wrap up the case in short order and the man who stole the sign admitted his crime. Deputies then promptly returned the sign to its rightful owner. The owner of the sign responded by saying the deputy who assisted him “is a wonderful person,” then promptly stuck it back in the ground in his front yard for public display. (“We found who has your sign. We’ve asked social services to send a social worker over to talk to him about his motivations and help guide him toward returning it.”)

Not surprisingly, the morons who want to eliminate police funding had no comment… Soon after two boys, both 13, started a lemonade stand in Peoria, Illinois, two men robbed them at gunpoint, taking the $30 they’d made up to that point. “I got a call from police saying, ‘Hey, your kids are okay, but they just got robbed,’” said the father of one of the lads. He rushed to the scene and found police officers surrounding the lemonade stand – buying lemonade and paying upwards of $20 per cup. Soon after, word of the incident got around and more people started donating to the boys to encourage them to keep at it: Over $3,500 was raised at press time. The boys were back in business four days later and the police came back again – with a parade of squad cars with lights on, lined up. (How low can you go to rob a lemonade stand at gunpoint? Police come out of pocket to help victims of crimes much more frequently than most realize.)

Hello, Dolly!… When sheriff’s deputies responded to a report in Liberty County, Georgia, they found what appeared to be a body lying next to a railroad track in Allenhurst. The deputies were careful to follow protocol and respectfully covered the body with a sheet while they waited for the coroner to arrive. Upon arrival, the deputies and the coroner pulled the sheet off and inspected the remains to look for injuries. But, that’s when they discovered that the body was in fact a female sex doll. A local TV station reported that the doll was fully clothed and was anatomically correct. Officials think they may have been victims of a prank. (Will they notify the next of mannequin?)

First rule of the court: Don’t irritate the judge… In Montana, a 60-year-old man was summoned to the Cascade County District Court to serve as a juror. But, despite the governor’s orders and those of the judge which required him to wear a mask in the courtroom, he refused because, he said, the COVID-19 scare is “exaggerated.” The judge was willing to compromise and offered to allow a face shield instead, but the man refused that, too. The judge then ordered him to serve 24 hours in jail for contempt, starting immediately. When other inmates found out why he was being jailed, he said, “The whole cell block started laughing loudly.” At almost the exact same time, the sheriff was learning that there was a COVID-19 outbreak in his jail – with 55 cases. “They put me in a position where I could be infected,” the man whined, “and that’s wrong.” (That’s a classic example of “stupidity unmasked.”)

Why buy the hitman when you can just rent him?… In South Rockwood, Michigan, a 51-year-old woman was arrested after offering an undercover state trooper $5,000 to kill her ex-husband. The woman met the trooper after allegedly visiting the fake Web site, rentahitman.com, where she completed a form requesting a consultation and named her ex-husband as the target. The owner of the Web site contacted Michigan State Police who sent the undercover officer. The woman was charged with solicitation to commit murder and illegal use of a computer to facilitate a crime. The Web site owner said over the last 15 years that “the Web site has been responsible for preventing over 130 murders.” The Web site’s owner says that he turns all requests over to law enforcement. (I fell for this guy’s other Web site: DateASupermodel.com.)

Heigh-ho, Heigh-ho, it’s off to jail I go… A 42-year-old man found what he believed to be the perfect place to live in quarantine: an 11.5 acre deserted island in Bay Lake, Florida. He later said that it was not only a “tropical paradise,” but it even had buildings for him to “camp” in. Discovery Island, formerly known as Treasure Island, is within the confines of Disney World and has been closed and off limits for more than 20 years. Even when Disney World is in full operation and the theme park is open, no one is allowed there. Disney security said the man passed multiple “No Trespassing” signs and locked gates to get there – and was using a Disney boat to make his way around. (Police introduced him to another “Magic Kingdom” – one with iron bars on the doors.)

Okay…rock, paper, scissors, CHAINSAW!… The Pennsylvania State Police said a man went to his former boss’s house in West Easton, Pennsylvania, threatened him, pulled a metal chain from his car, and started chasing him. At the time, the victim was unloading work equipment and grabbed a tool to defend himself. His defensive weapon of choice: a chainsaw which he immediately started. The boss mangled the attacker’s chain with his chainsaw and the accused, knowing he was outclassed, retreated and drove away. Police caught up with him, charging him with terroristic threats and simple assault. (It looks like he won’t be getting his old job back anytime soon.)